10 YEARS OF EXCELLENCE: VSN’S NO. 2 BOYS LACROSSE ATTACKMAN OF THE DECADE 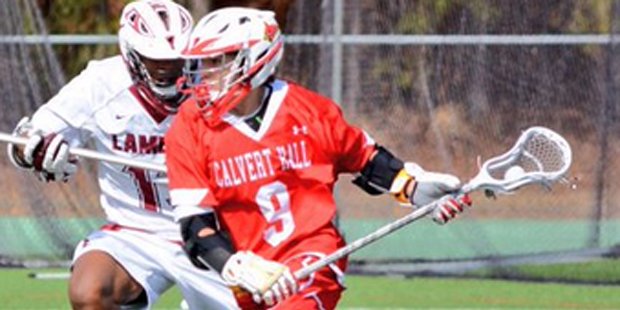 by Nelson Coffin
The lessons Jacob Kelly learned in his first two seasons as a starting attackman at Calvert Hall College High School stayed with him throughout his prep career and helped him to become a two-time MIAA A Conference champion and VSN’s No. 2 Boys Lacrosse Attackman of the Decade.

“We were going through kind of a culture rebuild,” Kelly noted about the 2015 and 2016 Calvert Hall squads. “Especially my sophomore year, we learned so much from the seniors. They showed us the value of hard work and what it means to be a good teammate. Those guys (Ethan Mintzer, Jack Kinnear, Joe McSorley and Michael Fanshaw) were really dialed in and focused.”
All that Kelly and the Cardinals absorbed from the veteran players during those formative years paid off with back-to-back MIAA A Conference championships in his junior and senior campaigns.
“After the 2016 season, we all just worked so hard in the offseason,” said Kelly, whose father, Bryan Kelly, is Calvert Hall’s coach and VSN’s Boys Lacrosse Coach of the Decade. “We knew we had the talent to win.”
Beating defending champion McDonogh School, 11-9, in the second conference game of the season with Kelly’s freshman brother, Daniel, scoring five goals gave the league an inkling of what was to come in the spring of 2017.
“After that game, we thought that we could win a title,” Jacob Kelly said. “We felt that the only thing that could beat us was ourselves.”
In order to make that prediction come true, however, the Cardinals, who went undefeated in league play, would have to beat the Eagles again to claim the championship.
They did just that, 12-6, as Jacob Kelly netted a pair of goals to wrap up a spectacular season in which he was the team leader in goals (47), assists (44) and ground balls (42).
While securing the program’s first title in five years was a major accomplishment, he said that his game-winning goal against archrival Loyola Blakefield in the regular season finale was a personal highlight.
“For me, growing up, the Calvert Hall-Loyola rivalry meant so much,” he said. “That was a special moment, and something I’ll always remember.”
Although winning one title was a major feat, being the first A Conference team to repeat since Loyola in 2007 and 2008 was something the Cardinals dedicated themselves to accomplishing.
“We made it a priority to carry that momentum over into the next season,” Kelly said. “We worked really hard in the offseason to get ready.”
Kelly noted in a VSN postseason video interview that Calvert Hall had to overcome the deaths of longtime assistant coach Dave Huntley and the father of teammate Peter Ilardo to prevail that spring.
“It helped us to bond as a team,” he said. “We weren’t just playing for ourselves.”
He added that Huntley was like a second father to him and praised Ilardo for being a “rock in the locker room,” even after Ilardo’s father passed away on the day of the season’s penultimate game.
An 8-5 setback to Boys’ Latin during the season was a turning point for the Cardinals.
“There were some things we needed to change,” Kelly noted in the video interview. “Once we kind of sacrificed our own personal goals or personal desires….and did our jobs, we started to click.”
He credits an “underrated” defense of George Walsh, Garrett Zungailia, Jake Snyder and Connor Mahar playing in front of goalie Jackson Marshall for keying the Cardinals’ 16-3 season that concluded with an 8-6 victory over Boys’ Latin in the championship game.
However, it was a relentless offensive effort that produced a 13-0 run, spurred by Kelly’s two goals and five assists, in a 15-9 verdict against Loyola in a semifinal that vaulted Calvert Hall into the final.
He concluded his senior campaign with 46 goals, 57 assists and 44 ground balls and was named the 2018 Boys Lacrosse Player of the Year for the second consecutive year by VSN and the Baltimore Sun before heading off to play for the University of North Carolina.
With the Tar Heels, Kelly scored 20 goals and added 11 assists last spring to exceed the combined output of his first two years (15 goals, 10 assists) as he was gradually granted more playing time in the attack rotation.
His legacy at Calvert Hall, though, is secure, considering that he finished just one point shy of his boyhood hero Kevin Huntley’s school record for points (341) after accumulating 162 goals and 178 assists with the Cardinals.
“I’ve been around watching my dad coach all my life,” he said. “Calvert Hall will be a part of my life forever. I’m just glad we went out on top.”
No. 3 Attackman: Jackson Morrill, 2016, McDonogh
No. 4 Attackman: Patrick Kelly, 2012, Calvert Hall