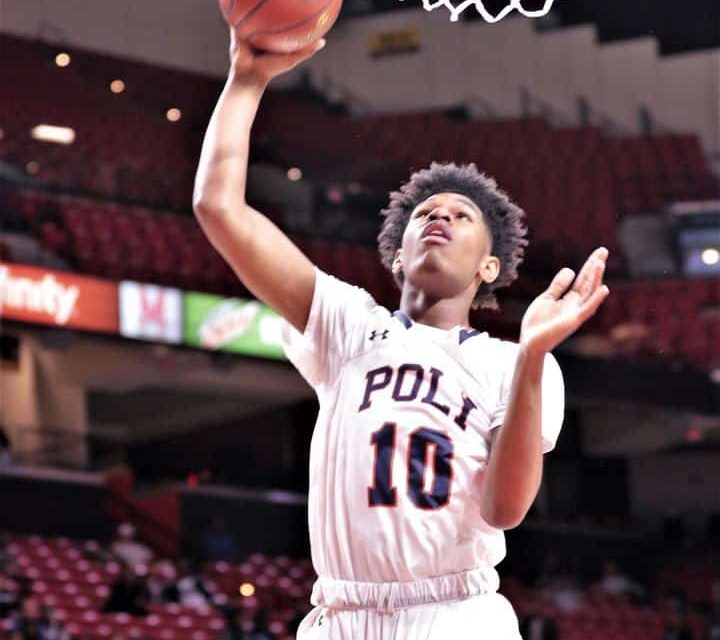 Justin Lewis’ Twitter handle is “@jusbuckets_5.” But the former Poly High star, VSN’s No. 2 Boys Basketball Center of the Decade, is much more than a scorer.

“He’s big and strong enough to bang with anybody,” said Poly coach Sam Brand. “He’s quick enough and skilled enough to go around guys on the dribble.”

Lewis’ versatility was displayed at the Cold Spring Lane school which became Baltimore City’s top program and, arguably, the state’s best public school in his three seasons. After making a splash as a freshman at Calvert Hall College, Lewis left the Towson private school for North Baltimore.

“It’s a different atmosphere. Coach Sam asked me to do more,” said Lewis. “I had to do things I wasn’t comfortable with, like getting loose balls, playing help defense.”

The 6-foot-8 Lewis did the dirty work, averaging 15.1 points and 9.2 rebounds as the Engineers (22-6) won a second straight Class 3A state championship. He had 17 double-doubles, including an epic 36-point, 11-rebound effort at then-undefeated Dunbar.

“He put us on his back…it was a pleasure to watch,” said Brand, whose team also won the City title. “We’ve got a lot of love for this guy so to see him do that on this stage at this time.”

Justin Lewis had a solid freshman campaign for Marquette University this past season. Lewis was VSN’s Co-Player of the Year as a senior at Poly where he won three Class 3A state titles and two Baltimore City championships.

Lewis continued being a dominant inside-out threat, averaging 17.3 points, 9.2 rebounds, 3.4 assists and 3.2 blocks lifting the Engineers to a three-peat in Class 3A. A repeat All-Metro first-team pick, Lewis finished the season with 16 doubles-doubles.

“By midseason, no matter what happened, we knew Justin would put his imprint and impose his will on a game and that was a major step for him,” said Brand.

With Lewis firmly entrenched as the leader, Poly, once an afterthought in Baltimore basketball, moved into the national spotlight. The Engineers gained their first national ranking (ESPN and MaxPreps) and defeated Florida prep school powerhouse IMG Academy at the East Coast Bump Mixer at UMBC.

Poly (24-2) won its second City title in three seasons. But a bid at a fourth straight 3A state title was paused with the cancellation of the state Final Four at the University of Maryland because of the COVID-19 pandemic.

Lewis, who averaged 19.3 points, 13.4 rebounds, 4.4 blocked shots and four assists, was selected VSN’s Co-Player of the Year. He totaled 1,374 points (third all-time) and 863 rebounds in three seasons for Poly.

A consensus national Top 150 recruit in the Class of 2020, Lewis signed with Marquette University, coached then by f0rmer Cardinal Gibbons and Duke guard Steve Wojociechowski.

“I know a lot of people in the area and we try to recruit Baltimore. Thank goodness Justin’s the first one we’re bringing here to Milwaukee. I think fans are going to love him,” said Wojociechowski.

Lewis made a solid impression for the Big East school, averaging 7.8 points and 5.4 rebounds as a reserve forward. His big moment came in December, when his tip-in at the buzzer lifted Marquette past in-state rival Wisconsin.

“I knew that I might have the opportunity if I crashed for the rebound, and then my instinct took over,” said Lewis, who had 18 points and eight rebounds against Wisconsin, following a career-best 13 rebound-effort against Oklahoma State.

With Marquette parting ways with Wojociechowski recently, Lewis’ future with the Eagles is unclear.

What is clear, however, is what Lewis brings to the court.

“He’s got the Baltimore heart. He’s a big-time competitor,” said Brand. “I think he thrives in situations where he’s the underdog or someone’s considered so-called better than him.”