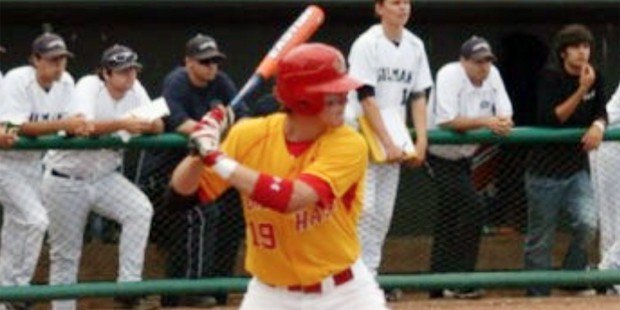 One of the most intimidating batters to pass thru the Baltimore area high school ranks over the last decade (2011-20), Matt Bosse struck fear in the hearts of opposing pitchers.

The 6-foot-6, 225-pound Bosse launched dingers with great regularity for the Calvert Hall Cardinals, a record 16 of them in 2011, one carrying approximately 485 feet out of Ripken Stadium in Aberdeen.

It was the longest home run that Cardinals’ veteran coach Lou Eckerl has ever seen.

“I’ve never seen a ball hit that far in all the years that I have been coaching high school baseball – was monstrous,” said Eckerl back then of his senior outfielder’s colossal shot against Archbishop Spalding in the MIAA Conference finals.

It capped a prolific senior season for Bosse in which he set a metro area record for home runs, knocked in 50 runs and scored 54. He batted at a .439 clip and his power was complented by his speed and athleticism enabling him to steal 20 bases in 21 attempts to earn him VSN Player of the Year and Baltimore Sun All-Metro honors.

The overall Maryland record is 17 by Riverdale Baptist first baseman Mike Sweeney in 2001. Sweeney also holds the state record for RBI’s at 64 with Bosse fourth and Costello the area leader at 58.With Bosse leading the way for the Hall in 2011, the Cardinals set the local record for most dingers by a team in a season, 56 in 37 games (28-9). Bosse ended up with the most career home runs in Calvert Hall history with 26. He belted seven as a junior and knocked in 35 runs while batting .380 after three dongs as a sophomore.

Unfortunately for Bosse, he didn’t get to go out his senior year as a baseball champion with Spalding winning the MIAA A Conference title in 2011.

“I loved my time at Calvert Hall and I took great pride in wearing Calvert Hall across my chest no matter what sport I played,” said Bosse, who played three sports at the Hall and was exceptional in each of them.

Bosse is the only Calvert Hall athlete to win three consecutive championships in the same school year turning the trick in his sophomore year of 2008-2009. He was an MIAA champion in volleyball in the fall, basketball in the winter and baseball in the spring.

“I was fortunate enough to play on talent loaded teams that were led by high quality coaches,” recalled Bosse, who co-captained all three teams. “Wearing Calvert Hall across the front of my chest, no matter what sport, was an honor. Calvert Hall taught me how to win.”

Baseball was special to Bosse. It was something always on his mind growing up.

“Playing baseball at Calvert Hall is a dream for any kid growing up in the Baltimore area,” he said. “The field, locker room, the stadium, the coaching, the records, the players and the tradition is second to none in the region. Coach Lou (Eckerl) got the most out of his players.

“The one thing I will always remember is how he would speak to his players in the on deck circle before a big plate appearance. He always seemed like he knew what to say and what buttons to press.”

“I hit a swinging bunt down the third base line that knocked in Pat Fitzgerald to win the game,” said Bosse.

Bosse turned down a chance to sign with the then Anaheim Angels coming out of high school and instead the Perry Hall resident took his physical ability and 3.85 GPA with him to College Park and enrolled at the University of Maryland on a baseball scholarship.

The big guy would play two years for the Terps and transfer to the University of South Carolina at Aiken for his final two and earned a Bachelor degree in Business Administration.

Bosse would hit only three home runs in each of his two seasons at Maryland and his batting average slipped from .452 to .261 as his playing time was reduced considerably.

Things picked up at SC-Aiken as Bosse slugged 10 homers his first season, drove in 54 runs and batted .306 in 50 games for the Pacers. In his final season, Bosse hit .320 with seven long balls.

Since graduating, Bosse has become a Financial Management Analyst for the Social Security Administration. Five years ago Bosse started a side business that has become a really fun experience, putting a baseball bat in his hands once again.

Judging by his accomplishments, those lessons may be quite valuable.