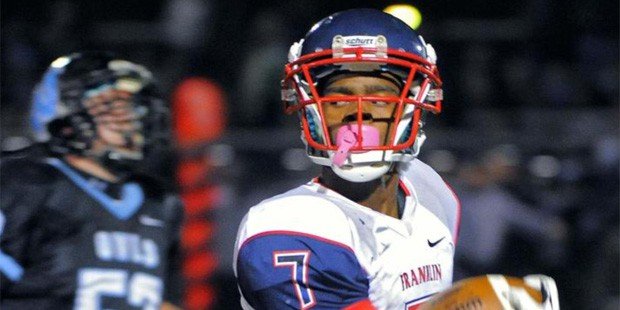 The most obvious takeaway from watching a highlights compilation video of Steven Smothers is that once he gained a step on a defender, it was over.

Precious few defenders could stop the Franklin High School star — and VSN’s No. 1 Receiver of the Decade — in the open field.

He was that good. That dangerous. That prolific.

Moreover, Smothers did his best work when it mattered most.

Just look at his first chance to shine on the biggest stage — the Class 3A state playoffs — in his sophomore year. 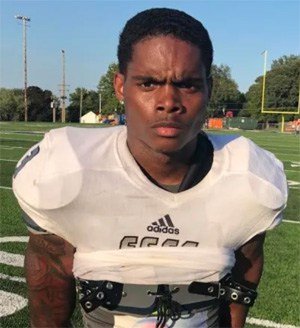 Steven Smothers’ college career has not blossomed as he would have liked, but he did catch 26 passes at Fort Scott Community College in Kansas in 2018, in between stops at West Virgina and Memphis.

He caught a touchdown pass, rushed for another score and returned an interception 56 yards for a pick six in a regional semifinal in a 49-14 pounding of Westminster High School after a fumble got his night off to a rocky start in the first quarter.

Smothers closed the scoring with a 73-yard kickoff return in the final two minutes of regulation after intercepting two passes and amassing 254 all-purpose yards to lead the Indians.

In the state title game against Linganore High School from Frederick County, he hauled in a 24-yard strike from quarterback Jacquez Adams for the Indians’ first score.

Then with the game deadlocked, 7-7, late in the third quarter, Smothers found a slight crack in the Lancers’ secondary and grabbed a fourth-down, 27-yard strike on the goal line to give the Indians a lead they would keep in what turned out to be a 20-7 triumph to secure the program’s first state crown.

His final seasonal totals (50 catches for 1,052 yards, 12 touchdowns and 1,816 all-purpose yards) gave a glimpse of what would turn out to be a tremendous career.

The University of West Virginia commit entered the 2014 Class 3A state championship game against previously unbeaten Damascus High School of Montgomery County with 31 receptions for 574 yards and eight touchdowns through the air — and then went all Midieval on the stunned Swarmin’ Hornets.

Smothers not only added significantly to those gaudy numbers with six catches for 122 yards and three TD grabs, the All-State performer also produced the tying, go-ahead and putting-the-game-out-of-reach touchdowns — the latter on a scoop-and-score — in the Indians’ 35-21 triumph.

To put it simply, the 5-8, 165 speedster practically willed Franklin to a second consecutive state title — and wowed his opponent.

Just ask Swarmin’ Hornets’ running back/defensive back Jake Funk, who offered his assessment of Smothers’ skill in a postgame interview with the Washington Post, which had Damascus No. 1 in its high school football rankings.

“He’s a great player,” said Funk, who rushed for over 200 yards for the Maryland Terps in their Big Ten Conference home-opening victory over the University of Minnesota on Oct. 30. “He’s very shifty with the way he cuts. He’s very dynamic, and in an instant, he’ll make a great play that will change momentum.”

All told, Smothers finished the 2014 campaign with 36 receptions for 696 yards and 11 touchdowns.

He also carried 15 times for 143 yards and five touchdowns and, combined with kick returns, accumulated 1,440 yards and 22 TDs.

While his final season at Franklin didn’t end with a three-peat, he still contributed mightily to the Indians’ cause with an impressive “Three-R” compilation of 1,164 yards as a receiver, rusher and returner, with 19 more touchdowns adding to his school-record 65 scores. Smothers’ 5,407 all-purpose yards total is one of six other program bests.

He always caught the attention of rival coaches when they were figuring out how to keep the Indians’ most dangerous weapon from ravaging their defense and special teams.

Milford Mill Academy coach Reggie White had a few simple words when it came to game-planning for Smothers.

“We had to double-team him on offense,” White said. “And never, ever kick to him. We were extremely concerned when he got the ball in his hands, because if he did, it was going to be a problem for us. We tried to make sure that someone else had to beat us, not him. We always had to know where he was on the field — he was that special.”

White added that Smothers even rattled the Millers a little bit during pregame warmups.

“We called it the ‘Smothers effect,’” White said. “He’d come out in a half shirt and then put on a shell……all our kids would be watching him.”

Smothers’ college career, though, hit snags at several stops, including with the Mountaineers and the University of Memphis.

The talented wideout did play briefly for Fort Scott Community College in Kansas, recording 26 receptions for 283 yards and a touchdown for the Kansas school.

Speculation existed that Smothers was going to attempt to restart is college career locally, at Stevenson University, this fall, but the Mustangs cancelled their 2020 season because of the Covid-19 pandemic. Thus, the next step in Smothers’ college career remains uncertain. What remains crystal clear, however, is the impact he had as a high school star at Franklin.