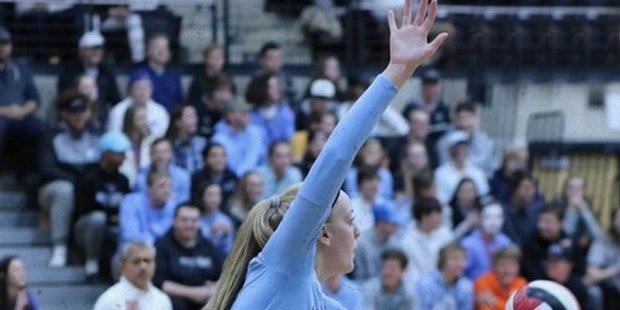 From the moment Jilienne Widener stepped on Westminster’s volleyball court, she set the bar high for her high school career — so high that The Carroll County Times named her its first-ever freshman Volleyball Player of the Year. 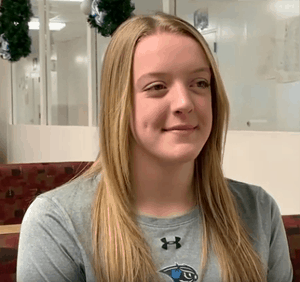 VSN’s 2019 Volleyball Player of the Year, Jilienne Widener is a freshman at Brown University, but remains at home studying virtually, waiting to begin her college volleyball career.

The 6-foot outside hitter handled all of that pressure and built on it each year to conclude her career as one of the best players in Baltimore-area high school volleyball history and Varsity Sports Network’s No. 1 Volleyball Hitter of the Decade.

Former Westminster coach Ed Benish told the Carroll County Times after her sophomore year that Widener was “a once-in-a-lifetime player.”

A four-time Carroll County Player of the Year, she was also a four-time Baltimore Sun All-Metro selection. Widener set a county record with 1,311 kills and had an exceptional .405 career hitting percentage. The Owls went 61-9 with her in the lineup and reached the Class 3A state semifinals twice and the state final her sophomore year.

PrepVolleyball.com named her an All-American and it’s Maryland Player of the Year last fall. She was a finalist for the website’s National Senior of the Year. Widener also earned Player of the Year honors from Varsity Sports Network and The Baltimore Sun after she finished the season with 336 kills, 129 digs, a .465 hitting percentage and a 94 percent serving rate.

“Jilienne was a stud,” Atholton coach Larry Schofield said. “She was the primary. She had a lot of good support, but she was the high-flying aerial act that everybody had their eyes on.”

That made her accomplishments even more impressive. Everyone knew she would hit the ball most of the time and almost always in critical situations, yet she still baffled opponents.

“She definitely was the go-to person and everybody knew it and nobody could stop her, not only because of her physical attributes, but her maturity and her mental ability. Just being smart on the court as well,” said Owls coach Evan Frock, an assistant for two years before taking over last fall.

“By the time we got to her senior year, she could hit any part of the court — line, cross, middle, deep, short — so it was really fun watching the other coaches tell the defense to shift to where she just hit and she would just hit a different spot.”

In her junior year, the Owls fell to eventual champ Atholton in the state semifinals despite 26 kills from Widener, who hit the ball 71 times in the four-set match, more than half of Westminster’s total attacks.

“Her arm swing is super fast, she can hit a wide range of spots and I think she’s a smart hitter too,” said Atholton graduate Lisa Zoch. “I remember one of the first things that stood out to me about her was her back row attack. She can run a really aggressive offense out of the back row which is something good teams utilize a lot when they need more options than just their pin hitters, especially when they meet a triple block or something.”

Widener, who played with 12 year olds when she was 7, competed against the top players in the nation with her Metro Volleyball Club of Washington, D.C., the No. 16 rated club in the country. Three times, she was selected for USA Volleyball High Performance teams.

In club, she wasn’t the primary focus of defenses, so she had to adjust at Westminster.

“It was definitely difficult. I put a lot of pressure on myself,” Widener said. “It definitely helped that our team was so close and that was so great, because even if I did make mistakes, I was like, ‘Hey, it’s okay. I got the next one,’ because I was playing for my teammates and I wanted to do everything possible to win for them. That helped me a lot being a primary, go-to hitter.”

As a senior, Widener had hoped to lead the Owls to their first state championship, but a bruised femur suffered in the regional playoffs left her barely able to jump at the state tournament. Still, she managed 16 kills and 12 digs in a 3-1 loss to Northern of Calvert County in the 3A semifinal as the Carroll County champion Owls finished 17-1.

Time has taken a little of the sting off that loss and Widener looks back bit more philosophically a year later.

“The highlight of my career was just making history at Westminster,” she said. “We went to the state tournament three years in a row and that was something that was never done before, so that was a really cool experience just to make history.”

Widener, 18, also enjoyed playing with her sister Camryn, 21, at Westminster her freshman year. She had followed her sister into the family sport.

Not only did their mother, Stacey (Smith) Widener, play at Westminster, but their grandmother, Oralee Smith, also played in high school. Smith runs the Carroll Viper Volleyball Club, where the sisters got their start.

Because of the COVID-19 pandemic, Widener remains at home this fall rather than on campus at Brown. The Ivy League canceled the fall season, so she takes one online class and Zoom chats with her Brown freshman teammates weekly.

She works out with a personal trainer three times a week and practices with other Metro Volleyball Club players with no fall season.

Having an interest in psychology as a major has perhaps made this fall’s disruption a bit easier to handle for Widener, who had a 4.0 unweighted GPA at Westminster.

“I’m just trying to look on the positive side of things,” she said. “I’ve gotten to spend so much time with my family which I took for granted before, especially because with club volleyball, I was gone almost every weekend. We’ve spent so much time together these past couple months and that’s been great.”