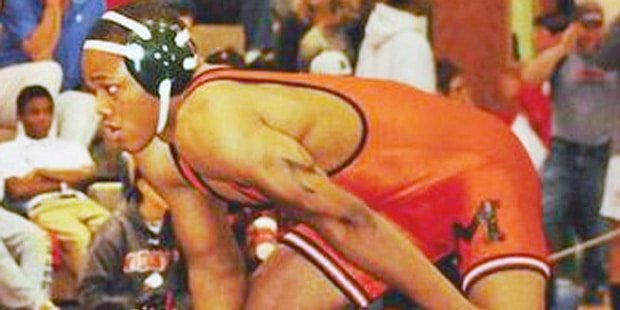 When our staff sat down to discuss our Wrestler of the Decade candidates, one individual – McDonogh School’s Myles Martin – stood head and shoulders above the rest and is, pound-for-pound, the best high school wrestler, who competed locally, in the last decade.

Fortunately for the rest, we named our top three lower weight and top three upper weight wrestlers of the past decade, with Martin claiming the title as VSN’s No. 1 Upper Weight Wrestler of the Decade.

Myles Martin won an NCAA D1 National Championship as a true freshman at Ohio State and went to become a four-time All-American with a 121-19 career record.

Competing against an ambitious national schedule in all four of his years with the Eagles, Martin produced a career record of 174-15 with 87 falls. This includes an incredible 95-2 mark over his final two seasons.

As a freshman, he placed second in both the MIAA and Maryland Independent State Tournaments and then won each event over the next three years. During his career, he also won the Beast of the East, perhaps the most prestigious high school title, and finished second at the Walsh Iron Man Tournament (OH) twice.

A native of New Jersey, Martin matriculated to McDonogh in search of a premier education, as well expert coaching and competition, but he found it difficult living away from home as a high school freshman and almost went home.

“My experience here has been great,” said Martin following his senior year. “McDonogh is a great place. It’s pretty much my family because I live here, pretty much every day of the week, but my freshman year, I was really big on going to Blair (Blair Academy in New Jersey, one the nation’s most successful high school programs). The coach was really trying to get me in and I wasn’t having a good time here, because I didn’t want to be here, but my dad told me to stick it out and give McDonogh a chance.

“I am really glad I did. It’s been awesome here and, sophomore year, I was getting the feel of high school, getting the weight right. I was able to make some adjustments and junior I year I was able to break out, winning tournaments, getting OW at tournaments. It’s been great. During the journey coming here, the coaches have been helping me a lot, with staying down on the weekends at their house, getting some workout parties in the room, and pushing me.”

Finally in love with the school, Martin faced another difficult decision prior to his senior year when he was invited to finish school and train at the Olympic Training Center in Colorado Springs, Co. Having already committed to a scholarship at Ohio State University, he was tempted. In the end, he felt he was still getting the best possible preparation at McDonogh and decided to complete his high school career where it started.

“Myles has a tremendous feel for wrestling,” said McDonogh coach Pete Welch. “He is so smooth on the mat that he makes it look effortless. Myles is incredibly athletic and mentally tough. He spends his off season competing and training all over the country, constantly finding ways to challenge himself.

“As good as he is, he is still a better person than a wrestler. He has no problem helping or just hanging out with anybody on our team. He is respected and well like by both his peers and teachers.”

So, did he receive the proper preparation for college wrestling at McDonogh?

Judging by his success at Ohio State, there is no doubt.

In 2016, Martin became only the 15th true freshman, and the first Buckeye, to win an NCAA Division I National Championship. He would go on to earn All-American honors in all four years, just the seventh in school history to do so, and reach the NCAA finals twice. He appeared in three Big 10 finals, winning a title in his senior year.

Martin continues to wrestle on the international circuit. In 2019 he reached the semifinals of the US Open Nationals and, later, came up just short in a bid to qualify for the US World Team. Early in 2020, he traveled to Europe and won the gold medal at the Grand Prix of France and was scheduled to compete in the 2020 Olympic Trials at Penn State, before they, and the 2020 Summer Olympics, were postponed because of the COVID-19 pandemic. Martin returned to competition last October and won the Flo 8-Man Challenge and, with it, a $20,000 award.