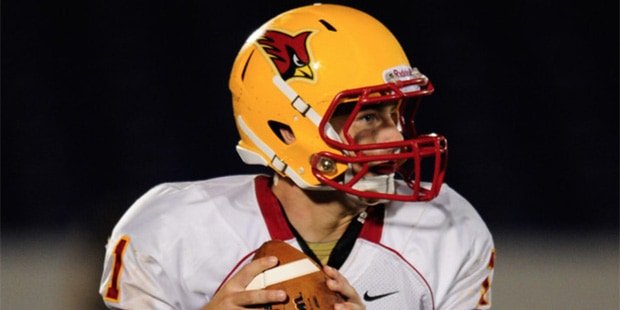 Even among his football contemporaries in the early part of the decade in the Baltimore Metro Area, bigger, faster and stronger players filled the signal-caller position on other teams.

That said, while leading Calvert Hall to its first and only Maryland Interscholastic Athletic Association A Conference championship, the 5-foot-11, 170-pound Stuart more than made up for his so-called shortcomings with a feel for the game that should be part and parcel of every elite quarterback’s résumé.

In just two seasons at Calvert Hall, Tommy Stuart led the Cardinals to one MIAA A Conference title and back to the league championship game the following year.

An uncanny ability to read defenses, go through his progressions quickly and deliver the ball accurately while avoiding pass rushers with quick feet were his best attributes.

“I guess I’ve always had kind of a chip on my shoulder,” said Stuart, now a medical devices salesman living in Pocatello, Idaho. “Because I’ve almost always been one of the the smallest guys on my team(s).”

With eyes that were seemingly in the back of his head, VSN’s No. 1 Quarterback of the Decade’s pocket presence and slick scrambling ability sustained drives during his two-year career under center when the Cardinals went 21-3 and were ranked No. 1 in the state by in the Maryland High School Football Foundation in 2010 and No. 4 in 2011.

Several longtime observers of the Calvert Hall program, whose knowledge of the team reaches as far back as the 1940s, believe that Stuart may be the school’s all-time top QB.

“I’ll always be appreciative for my time at Calvert Hall,” said Stuart, a part-time QB coach at Century High School in Pocatello. “I really enjoyed my time there and enjoyed working with Coach (Donald) Davis. When I look back at the MIAA in 2010 and 2011, there was really a high level of play then and I feel like we helped to lay the groundwork for how Baltimore has become one of the top places to recruit (high school players).”

His legacy was cemented in his junior year when he threw for 174 yards and three touchdowns in a 26-21 triumph over defending A Conference champ Gilman after trailing by two touchdowns in the fourth quarter at Paul Angelo Russo Stadium.

Stuart also rushed nine times for 45 yards in the victory that was a springboard for the Cardinals’ title run that season.

The next year, he once again had the Greyhounds on the ropes in the A Conference championship game when he engineered a crisp six-play drive that ended with the third of his game-high five touchdown passes, an 18-yard strike to senior running back Brandon Neverdon to tie the score with 28 seconds to go in the fourth quarter. 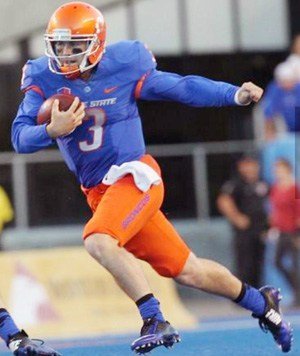 Tommy Stuart played two seasons at Boise State in Idaho. He also play one year on the junior college circuit at Butte College (CA) and finished his career with one season at Duquesne University.

Calvert Hall’s euphoria was short-lived, though, when the extra point was missed and the game went to overtime.

In the first overtime on fourth down, Stuart lobbed a throw that Neverdon pulled down for a 26-20 Cardinal advantage.

After Gilman jumped back on top, 34-26, Stuart found junior Kyle Levere on an 11-yard touchdown pass to close the deficit in what turned out to be a 34-32 setback to the Greyhounds.

Stuart’s other TD tosses in the showdown were for 15 yards to current Philadelphia Eagles cornerback Trevor Williams and 14 yards to running back CJ Williams.

Stuart refused to blame the kicker for the loss, saying that playing on an unfamiliar field at Towson University’s Johnny Unitas Stadium may have contributed to the mishap.

“We knew it wasn’t his fault,” Stuart said. “You can’t blame one kid for a one-point loss. There are so many things that someone else could have done, including me, to win the game.”

Earlier in the season, he delivered a fourth-down TD strike to Levere with three minutes remaining in regulation to put the Cardinals ahead for good in a 28-27 verdict over Red Lion (Del.), had seven TD passes in a triple-overtime win over McDonogh and tossed 48-yard and 23-yard TD passes to Trevor Williams in a 29-23 triumph over Archbishop Spalding.

All told, after connecting for two TDs and 252 yards through the air in a 34-17 victory over archival Loyola Blakefield in the Turkey Bowl in front of 10,800 fans at Johnny Unitas Stadium on Thanksgiving morning just six days after the devastating loss to Gilman. The only quarterback chosen for the All-State team, he finished his senior season by connecting on 216-of-302 passes (71 percent) for 2,620 yards, 38 touchdowns and only four interceptions.

“In terms of just being a pure quarterback, Thomas had everything you could want,” said former Calvert Hall coach Donald Davis, now coaching at Sidwell Friends. “He threw the most catchable ball and he threw it right on the money. In 7-on-7 games one summer, he never threw a pick the whole season. Do you know how hard that is? That’s like a basketball player never missing a shot.”

Stuart’s legend grew in in the ultra competitive California community college league when he led Butte College, which produced current Green Bay Packer great Aaron Rodgers, to a tie for No. 1 spot in the JCGridiron.com national poll, after earning MVP honors in the California Junior College State Championship game.

Stuart helped the Roadrunners set team marks for both total offense and most points in a game (84).