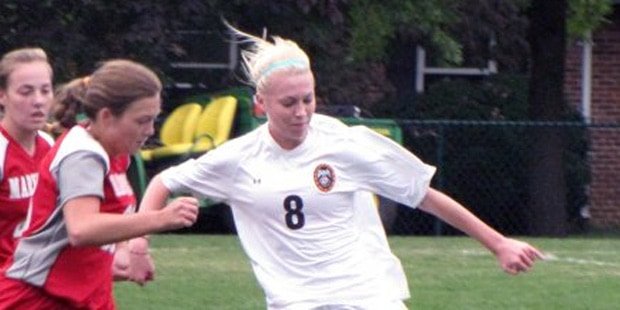 No one can argue that Ashely Spivey was at the vanguard of what has turned out to be a girls soccer dynasty at McDonogh School. 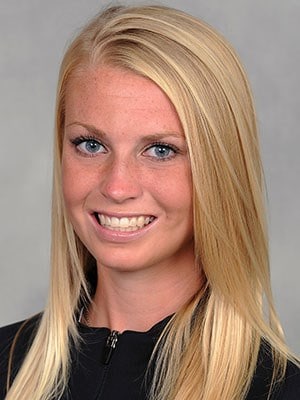 After her brilliant career at McDonogh, Ashley Spivey split her college career between University of Maryland and the University of Central Florida. After earning her degree, she settled in Jacksonville, Fla. where she is working as an accountant.

Even so, the talented midfielder would counter that it took more than one player to turn years of frustration into unmitigated success for a program that would win eight Interscholastic Athletic Association of Maryland (IAAM) A Conference titles in the next decade, beginning with her junior (2010) and senior (2011) seasons.

“We had such strong and athletic upper classes,” said Spivey, who is now an accountant living in Jacksonville Beach, Fla. “It was such a dominant group. All of our success came from that.”

Yet her individual achievements during that pivotal period make her selection as VSN’s No. 1 Girls Soccer Midfielder of the Decade a no-brainer.

After all, the talented central midfielder was ranked as the sixth overall recruit in the nation by TopDrawerSoccer.com and was a member of the U14-U18 National Pool, the U17 World Cup Qualifying Team, a four-time ESPN Rise All-South Team selection and a repeat ESPN Rise Best Player in Maryland choice.

She finished her tenure as a four-year starter who pumped in a whopping 85 goals with 57 assists for the Eagles from 2008-2011, staggering numbers that cannot be overlooked.

In the championship final her senior year against Archbishop Spalding, Spivey’s play in the middle made life miserable for the Cavaliers.

Although McDonogh lost an uncharacteristic three times in 21 matches in 2011, she and her teammates came through when it mattered the most.

“Everyone wanted to beat us,” Spivey told VSN in an interview that fall when she was named VSN’s Girls Soccer Player of the Year for the second year in a row. “But we won the ones that counted. We didn’t take any days easy (off) and we were very prepared for the season.”

She produced 19 goals and 14 feeds in her final campaign at the Owings Mills school before scoring three goals and assisting another pair of tallies in Baltimore’s 5-1 win over Washington in the Maryland Association of Coaches of Soccer (MACS) All-State Game.

“That game was fun,” she said. “It was cool to play with kids you played against all year, just like it was on the national team.”

The first championship, though, still feels special to Spivey.

“That feeling — I just can’t beat that,” she said. “When Casey Martinez scored that goal (in sudden death to beat Archbishop Spalding), everybody went crazy. When we had our (team) picture taken after that game, it was a lot different than the picture after we won my senior year.”

Unlike some of her peers on the U18 National Team, Spivey thrived while playing for the Eagles.

“Some of the girls on the National Team don’t even play for their high school team,” she told VSN. “But our high school team was just as good as our club team. We set a high standard, and I think that extra three months of training kept me on my toes.”

A twice-selected National Soccer Coaches Association of America Youth All-American, Spivey began her collegiate career at the University of Maryland before transferring to the University of Central Florida for her junior and senior campaigns.

Named to the ACC’s All-Freshman Team, she finished with 11 goals and six assists with the Terps before moving to the Sunshine State where she had six game-winning goals as a senior and totaled 21 goals and eight assists in two seasons for the Knights.

Spivey was recently named to UCF’s All-Decade Team as well.

‘McDonogh gave me a great foundation,” she said. “And Maryland led me to UCF, which was a good place to finish my college career. I had a great experience there.”

McDonogh coach Harry Canellakis always knew he could depend on Spivey to keep the Eagles under control on the pitch.

“Ashley was a great soccer player with a great soccer mind,” McDonogh coach Harry Canellakis said. “Often players are judged on the goals they score, but she worked hard on both sides of the ball and developed into a strong leader. The players looked to her to motivate them and she also led by example.”

“It wasn’t hard to be a leader,” Spivey added. “Because we had such a great group of kids. Playing for and attending McDonogh was nothing short of an honor and a privilege. I will forever be grateful for my teachers, coaches, teammates, friends and especially my parents for not only believing in me, but pushing me to accomplish my dreams and goals both on and off the field. I am humbled to represent such a prestigious program with an esteemed award such as this one.”