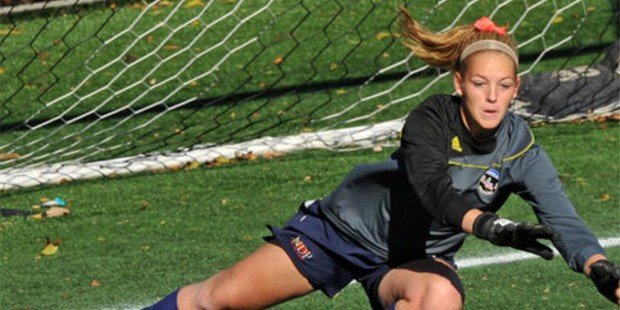 Ashley Gabor, who recorded 10 of her 29 career shutouts as a senior at Notre Dame Preparatory School, finished her final campaign with the Blazers with 59 saves.

None was more crucial than the extraordinary stop she made on the first penalty kick in a 4-3 shootout verdict over McDonogh in a 2016 A Conference semifinal that propelled Coach Val Teixeira’s club to its third straight Interscholastic Athletic Association of Maryland (IAAM) A Conference championship match. 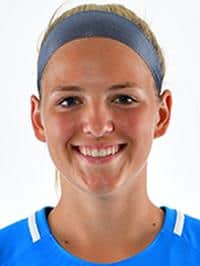 Iddled as a senior at the University of Pennylvania by the COVID-19 pandemic, Ashley Gabor is hoping for a spring season or an opportunity, as a transfer, at another school next fall.

That block on the first attempt in a shootout after the Blazers held the high-powered Eagles scoreless for 100 minutes keyed the victory.

It was the kind of performance Teixeira had come to expect from the standout keeper, who was a two-time team captain and first-team All-State selectee.

“Ashley was very good at communicating and took command of the backline,” he said. “She was just such a hard worker who made the most of every play.”

After that electrifying win, Gabor and the Blazers then put the clamps on Spalding during 80 minutes of regulation and 20 minutes of overtime, blanking the Cavaliers until succumbing in a shootout in the finale.

If Gabor hadn’t made a spectacular one-handed save against Spalding’s Krista Boretti in the second overtime to keep the deadlock in place, the Blazers would have been eliminated right then and there.

“There are the saves that you are supposed to make,” she said. “And then there are one or two that no one expects you to make, and they can turn a game around.”

It was those kind of theatrics, to complement her solid presence in the back, that made Gabor an easy pick as VSN’s No. 1 Girls Soccer Goalkeeper of the Decade.

“There was a lot of action in both games, and we played well,” said Gabor, whose senior season at the University of Pennsylvania has been lost to the coronavirus shutdown. “Those were my two best-games — and my most fun games (at NDP).”

Even though the loss to Spalding was the second straight shootout setback in the final for Gabor — the Blazers also fell to McDonogh in 2015 when VSN’s No. 2 Girls Soccer Striker of the Decade Kia Rankin powered in the final shot for the Eagles — she always made life difficult for her opponents.

“We had practiced PK’s that week, so I just tried to do what we did in practice, and, luckily, it went in,” Rankin said, noting that she had great respect for Gabor’s ability to stifle even the most prolific offense.

“Ashley is just a fantastic keeper,” Rankin continued. “She was stopping everything during the game (before the shootout). Every time we played against her, she made it hard on us. It was very frustrating. Anything within arm’s reach was a cakewalk for her.”

“Even though she lost three years in a row (in championship matches), she stayed strong mentally,” he said. “She used it to motivate her — in a good way. I mean, she’s a really talented player, and that’s why she plays in the Ivy League.”

“To make it that far three years in a row was amazing,” Gabor said. “But it was kind of bittersweet (to lose all three). It was awesome having Val as a coach — someone who knows so much about the sports and is so invested in the girls.”

Gabor used her 5-foot-9 frame and quick reactions to keep NDP in almost every match during her four-year career that began when she played behind her sister, Tori, as a freshman.

“Playing with her that year was a highlight,” Ashley Gabor said. “We had always trained together, but it was awesome learning from her. It was great to have that introductory year (at NDP) playing with my sister.”

By the time the younger Gabor was a senior and her sister was playing in the goal for the University of Louisville, the younger sibling was making her presence felt in a big way for the Blazers.

In a key conference game against Mercy early that fall, she made an acrobatic save — and then plucked the rebound from the air in one continuous motion — to discourage a Magic rally.

“Probably only one keeper in the state could have made that save,” Mercy coach Doug Pryor said following the match. “And she made it. Those are the little things in this league that make a difference. That goal goes in — who knows?”

The rising senior at Penn had a 0.63 goals-against average for the Quakers in limited action before her senior season in the Ivy League was curtailed by the corona virus shutdown.

“This was supposed to me my year to start,” she said.

If the Ivy League does not play soccer in the spring, Gabor may use her final year of eligibility at another school next fall while she studies to earn a graduate degree.