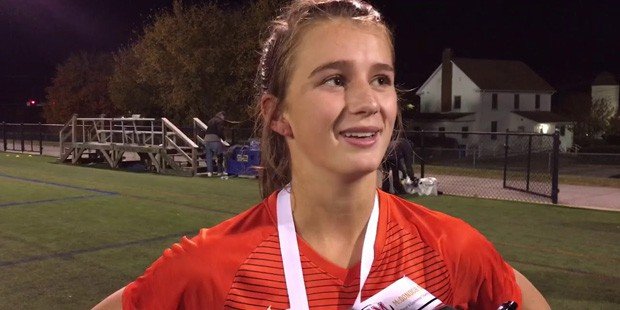 After an ACL injury sustained on Oct. 20th of her junior year and operated on 11 days later, Julia Dorsey had some uncertainty to deal with before her senior soccer season at McDonogh School.

First, she had to believe that her injured knee was fully healed before embarking on her final high school campaign.

Labeled the “lacrosse kid,” Julia Dorsey was expected to have battle for a spot on the University of North Carolina’s travel squad as a freshman in 2019. Instead she logged more than 1,900 minutes for the NCAA Division I Women’s Soccer national runners-up.

It took a while for Dorsey to come to that conclusion, the following summer, without wearing a protective brace and before returning to the pitch to play in the ultra-competitive Interscholastic Athletic Association of Maryland (IAAM) A Conference that fall.

“I had to get my confidence back,” Dorsey remembered. “In the back of my head, I was still a little nervous. Plus, I was rusty from not having played soccer in awhile. That brace was my safety net, but the first day of practice I said, ‘Screw it, It’s time for me to try to play without it.’ And that (not wearing the brace) made me feel that I could play like I did before the injury.”

Once that faith in her surgically-improved knee was restored, it was her willingness to become the anchor of the defense that most impressed her teammates and coaches.

Having played right back on her club team, Dorsey had some familiarity with the position — and used it to her and the Eagles’ full advantage.

“It made sense for me to take on that role,” she said.

Although she played several positions for coach Harry Canellakis’ club during a brilliant four-year career, her commanding presence on the backline in 2018 is what earned Dorsey the selection as VSN’s No. 1 Girls High School Soccer Defender of the Decade.

The move to the back — and her growth as a team leader — was the a key toward stabilizing the Eagles’ defensive integrity that fall.

Still, while concentrating on keeping rival offenses in check, she always made sure that the Eagles were always looking to exploit an advantage after regaining possession of the ball.

To that end, Dorsey scored nearly as many goals (8) as the stingy McDonogh ‘D’ gave up all season (9) on the way to producing a 16-0-2 record, claiming an IAAM A Conference championship after a 5-0 romp over Archbishop Spalding in the final and earning a wire-to-wire finish as the No. 1 team in VSN’s Top 20.

“My senior year was just so special,” she said. “We all played so well together. And a lot of that had to do with the culture Harry created for our team. It was great to go out on top.”

She added six assists as a senior to give her 26 goals and 21 helpers as a four-year starter for the Eagles, solid numbers that belie her true value to the program as a versatile player who could bolster any position.

The three-sport performer, who also played basketball and lacrosse at the Owings Mills school, currently plays both soccer and lacrosse for the University of North Carolina, becoming only the sixth Tar Heel to accomplish that demanding double feat.

“Everybody works hard around Julia because she worked so hard,” Eagles coach Harry Canellakis said about the 2018 United Soccer Coaches Fall High School Girls All-America selection. “She really did bring up the level of our entire team just by who she is on the field.”

VSN’s No. 2 Girls Soccer Striker of the Decade, Kia Rankin, said that she admired Dorsey as a teammate at McDonogh and as a soccer opponent in the Atlantic Coast Conference.

“Even as a freshman (at McDonogh), Jules was wise beyond her years,” said Rankin, who lost to Dorsey’s Tar Heels while playing for North Carolina State University last fall. “She not only can run for days, but she’s really fast as well. I’m happy to have played with and against her.”

If she didn’t exceed her own expectations for how much playing time she would earn in Chapel Hill, Dorsey certainly went above and beyond UNC women’s soccer coach Anson Dorrance’s original estimate of her potential.

“She came to our ID camp last February and she impressed us with her athletic platform and also with her experience as a right-sided defender,” he said in a coach’s quotes section of the 2019 UNC roster. “She will compete for a spot on the travel roster to be a reserve right back.”

Dorsey proved that he greatly underestimated her ability when she logged more than 1,900 minutes for the NCAA Division I runners-up.

“I was just the ‘lacrosse kid.” she said, noting that she still jokes with Dorrance about those remarks.

She played in all 27 matches as a rookie in 2019, starting 18 of them for Carolina, which fell to Stanford University in the College Cup final.

“The speed of play is just so much faster,” Dorsey said. “I wasn’t expecting to play as much as I did. It was just a surreal experience.”