10 Years of Excellence: VSN’s No. 1 Girls Lacrosse Defender of the Decade 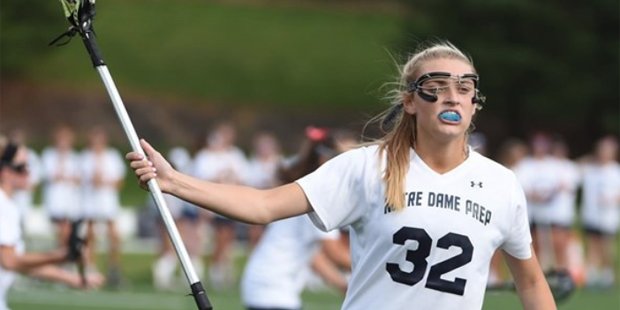 Sarah Cooper has an easy time choosing her favorite game from four years as a stellar defender at Notre Dame Prep.

“Obviously beating McDonogh and ruining their streak was awesome,” Cooper said. “That’s all we worked towards. We worked towards beating everyone, of course, but in the back of our minds that was the one thing we wanted to check off our list and senior year, we checked it off… It was just a great high school year.” 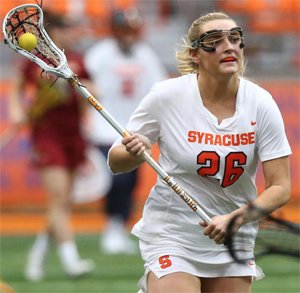 Sarah Cooper burst onto the college scene at Syracuse as the ACC Freshman of the Year and a 2nd team All-American. This spring she became a 1st-team All-American and led the Orange all the way to the NCAA title game.

In the 10-8 IAAM A Conference championship victory, VSN’s No. 1 Girls Lacrosse Defender of the Decade led the stifling defense that held McDonogh to its lowest offensive output in more than three years and well below the Eagles’ 15-goal season scoring average. The Blazers’ title, their first in 15 years, ended the Eagles’ 198-game win streak and their run of nine straight A Conference championships.

Coopers’ unit allowed an average of just 7.76 goals over the course of the season and gave up just 20 in three playoff games as they avenged one-goal regular-season losses to McDonogh and to Glenelg Country.

Blazers coach Mac Ford said Cooper was the clear leader of that defense.

“She knew our defense better than the coaches did,” he said, “and she had everybody in the right spot and everybody had total confidence in Sarah and would look to her to get them in the right position. Whenever the ball was in her stick, she would clear the ball. She was the consummate coach on the field. That’s why she’s a first-team All-American at Syracuse.“

Her senior year, Cooper earned VSN’s Defender of the Year, Baltimore Sun All-Metro first-team and Under Armour All-America honors. Inside Lacrosse named her the No. 11 recruit in the Class of 2018 and the top defender.

She finished the season with 15 takeaways and 40 ground balls. She also cleared the ball about 2.5 times per game, Ford said.

A shutdown defender in the Blazers’ backer zone defense, Cooper excelled at deciphering offenses. She seemed to have a sixth sense for reading attackers’ intentions.

She easily stood out no matter what defense the Blazers ran and Ford remembers her individual effort being critical to a 14-10 win over Bishop Ireton early in her senior year.

“Her greatest strength was her presence on the field,” Ford said. “I can remember we had to switch to man-to-man against Bishop Ireton and they had a great lefty attacker, Lexi LeDoyen. She had a bunch of goals the first half and Sarah just took her totally out of the game in the second half, so she can play one-on-one, she can play zone, she can do it all.”

“I scored a lot in the games, but I never scored in practice and that was because of her. It was super tough,” Mardiney said. “She would mark me every day… She was smart. It’s like she knows what’s going on everywhere around her. And she was so good. She was the type of defender who wouldn’t just stop you, she’d check the ball out of your stick and pick it up and run down the field. She was really good at causing turnovers as well as playing great one-on-one defense.”

Cooper and Mardiney have been friends since they were little and were also tennis doubles partners at NDP and Cooper said she loved playing and competing with so many friends.

“The best part was just getting to practice everyday, because we were all so close…” she said. “We had so much fun in practice. We had a team of like 45 girls. It was always in the press about how we had such a big team, but that was one of my favorite things about high school, because there was so much competition. We had so much fun competing with our best friends all practice and it helped to adjust to that for college, having such a big team and having so much competition.”

Since she started playing lacrosse around fourth grade, Cooper has never played anything but defense.

“I guess that’s how my brain works and I never liked to score, so it kind of worked out,” she said.

“The attacking mentality on defense, that’s something I really enjoy. Even if I’m just watching another team play, I like seeing a defense that’s coming out strong and hot and trying to knock the attack back on their heels. That’s what I love about the position. It’s taking a position where you’re supposed to be so reactive, and going after them and making them change their game. Knowing that the attack wants to do something and being able to stop what they want to do and make them play a different game is rewarding and it’s fun”

Cooper didn’t skip a beat when she got to Syracuse, she was the ACC Freshman of the Year and an Inside Lacrosse Media second-team All-American in 2019. She led the Orange with 33 caused turnovers, second most on the program’s all-time single-season list.

In 2021, she earned first-team All-American honors from the Intercollegiate Women’s Lacrosse Coaches Association and Inside Lacrosse as the Orange reached the NCAA championship game. She ranked third in the ACC in caused turnovers (1.57 per game) and second in ground balls (2.29).

Cooper is spending this summer at home in Baltimore, coaching with her former club, TLC, and working at camps. She will be a senior at Syracuse and, next spring, hopes to help the Orange win that elusive NCAA championship they were so close to in May. She also plans to stick around for the extra year of eligibility granted by the NCAA after losing most of the 2020 season to COVID-19.