10 Years of Excellence: VSN’s No. 1 Girls Golfer of the Decade 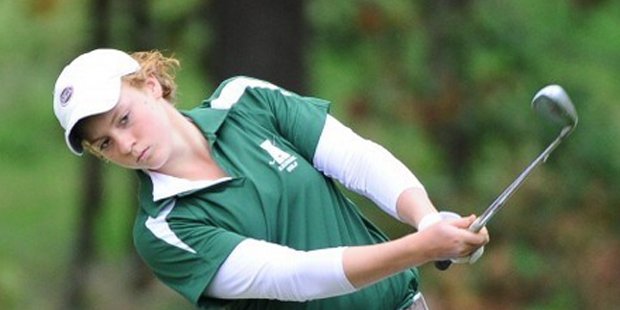 Elyse Smidinger accomplished about everything a golfer could while at Arundel High School.

The former Crofton resident earned state championships in 2010 and 2011 for the Wildcats, matching Marriotts Ridge standout Faith McIlvain and Atholton’s Bryana Nguyen as the only players to win back-to-back state titles during the decade (2010-19). 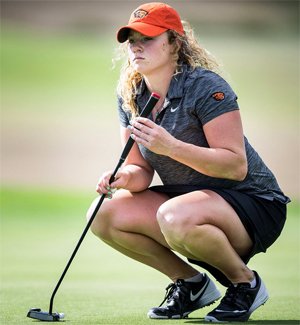 Elyse Smidinger carefully reads the green prior to a putt during her time at Oregon State University, where she finished her college career, after two strong seasons at the University of Denver.

Smidinger was just as successful in the amateur ranks by capturing two Maryland Junior Amateur Championship titles during the decade — after winning her first one in 2009 — and finishing second once.

Moreover, she qualified for the 2014 U.S. Public Links Women’s Amateur, finished her junior career with a local amateur exemption into the LPGA Futures Symetra Tour Challenge where she made the cut and finished 36th out of 136 entrants.

Smidinger also qualified for the U.S. Junior Girls Championship in 2010.

She would go on from there to compete for the University of Denver, taking First-Team All-Summit League honors in 2014 and 2015.

Moreover, VSN’s No. 1 Girls Golfer of the Decade won the Summit League Championship individual title in 2015 while in the Mile High City, received the University of Denver Strength and Conditioning Award in 2015 and was an All-Western Athletic Conference pick in 2013.

She was also selected to the WGCA All-America Scholar Team in 2013.

And all of that came before Smidinger finished her stellar career at Oregon State, averaging 75.07 in 26 rounds, the sixth-best single-season scoring average by any Beaver while being named to the Pac-12 All-Academic Second Team.

Other highlights include firing a school-record 5-under 67 in the second round of the Rose City Collegiate and she concluded her career in Corvallis by finishing tied for 33rd in the Pac-12 championships.

She was 45th in the NCAA Regionals to complete her collegiate career.

Arundel coach Geoff Turk did not claim that Smidinger was head-and-shoulders above the other public school players of her era.

“There have been some really good players,” he said. “But she definitely stood out among the competition. She was laser-focused, and when it was time to play you could see that focus. She just had that golfer’s mentality. I really didn’t have that much to do (with her game). I would just talk to her about course strategy.”