10 Years of Excellence: VSN’s No. 1 Girls Draw Control Specialist of the Decade 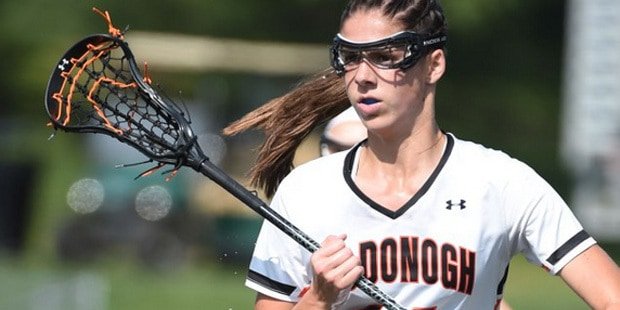 Possession might not be nine-tenths of a lacrosse game, but Maddie Jenner made it seem that way.

VSN’s No 1 Girls Lacrosse Draw Control Specialist of the Decade excelled at winning the draw like no one else in Maryland girls lacrosse history. During her three years as a McDonogh starter, she won 567 draws, averaging 8.7 per game. 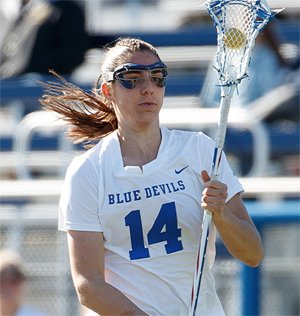 Every bit as dominant in college as she was in high school, Maddie Jenner is well on her way to breaking all of Duke University’s draw control records, most of which are owned by her sister Olivia, also a McDonogh graduate.

Rarely could an opponent contend with the 6-foot-2 Jenner on the draw. Her height, long arms and ability to draw the ball high in the air to herself gave the Eagles an overwhelming chance to win possession every time she set up in the draw circle. Jenner also worked well with her teammates on the circle, so if an opponent forced her to adjust, she made the ball fly to the circle where the Eagles were often just as effective at getting the ball.

A year after Jenner was named USA Today’s 2018 National Player of the Year, she helped the U.S. win the U19 World Championship by controlling 61 draws in seven games.

US Lacrosse magazine’s Kenny DeJohn said Jenner “set the gold standard” during the tournament. In the title game, a 13-3 win over Canada, she won eight draws and was named to the All-World Team.

As a junior at McDonogh, Jenner won 165 draws. Her closest teammate won 39.

That year, she won 56 percent of all McDonogh draws, but then-McDonogh coach Chris Robinson estimated that she probably controlled about 80 percent of the draws she took, because in most lopsided games, she only played in the first half.

“She’s a difference maker, there’s no doubt. We get a lot more possessions and play a lot more offense because of her,” McDonogh coach Chris Robinson said at the time.

In a regular-season game against Notre Dame Prep her junior year, Jenner won seven of the first nine draws and helped the Eagles win 18-of-24 in a 15-8 win.

“Coach Chris (Robinson) told us before the game that they would be very good in transition,” Jenner said after the game. “Taking away their transition game would be to our advantage, so by getting the draws we did.”

And they did time and again with Jenner in the draw circle.

Notre Dame Prep coach Mac Ford called her “phenomenal” after the Eagles defeated NDP, 12-9, later that season for the IAAM A Conference title. Jenner controlled 14-of-23 draws herself and helped the Eagles win 20, including every draw in the first half.

“She’s the best high school player in the country,” Ford told VSN. “For what she does, there’s no other dominant player.”

At the Under Armour All-America Game, she won five draws, including the one that set up the game winner in overtime of the South’s 10-9 victory.

Jenner, who swept local Player of the Year honors from VSN and The Baltimore Sun as a junior, counts the Eagles’ three A Conference titles among her game highlights, but her favorite memories of high school lacrosse weren’t the games.

“Winning each championship was so special, but my favorite memories were the times when we would stay around after practice and just like goof around on the turf field and like the Vero Beach trip when we would have a morning off from practice and just get to spend time with our teammates and enjoy the relationships,” said Jenner, a three-time Sun All-Metro first-team selection.

Jenner made the draw her specialty as a sophomore when she took over for her sister Olivia and won 182, but she also contributed on both ends of the field. As a junior, she finished second on the team with 40 goals and had four assists. She led the Eagles in scoring in the title-game against NDP with three goals and one assist.

She added 50 goals and 20 assists as a senior and finished her career with 137 goals and 59 assists.

At Duke, she reunited with Olivia, who holds the Blue Devils’ record for career draw controls with 512. The sisters, three years apart, played one year together at Duke as they did at McDonogh and after breaking Olivia’s McDonogh records, Maddie is aiming for her college records. She already broke one.

This past spring, she won 187 draws, breaking Olivia’s single-season mark of 150, as the Blue Devils reached the NCAA quarterfinals. Several times during the season, Maddie won 15 draws in a game.

In three seasons, including one halved by COVID-19, she has 371 draw controls. Her 88 as a freshman ranked second that season to Olivia. In the nine-game 2020 season, Maddie won 96 draws and was named a first-team All-American by Inside Lacrosse.

Jenner, 21, will return to the Duke lineup next spring and also plans to play for a fifth year, as granted by the NCAA to compensate for the COVID-19 interruption in 2020.

Planning to become a doctor, likely in orthopedics to work in sports medicine, she is also interested in public health policy and is spending part of the summer preparing for a fall independent study project. After finishing a molecular biology class, she took a break at the beach.

“It’s just to try out the new 6-v-6 discipline that would eventually be in the 2028 Olympics — that’s the goal,” Jenner said. “It definitely doesn’t cater to someone who one of their strongest things is the draw, because there’s just a draw at the beginning of each half, but I figured it’s out of my comfort zone, so it would definitely help me get better.”