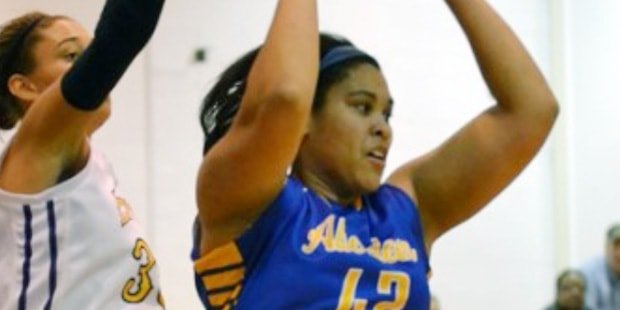 Nobody dominated the post the way Brionna Jones did with a rare combination of size, power and finesse that would take her to Maryland and to the WNBA.

At 6-foot-3, VSN’s No. 1 Center of the Decade frustrated opponents with her ability to maneuver smoothly in traffic, dominate the boards and finish strong as she led Aberdeen to its first state championship and the No. 1 ranking as a junior.

“Bri was always heads above other players just with her work ethic and her dedication,” said her Aberdeen coach Stacy Liles. “And then her hands — that girl could get any ball. No matter where it was, if you got it in there, she would catch it and do something with it. She was just so finesse. But also basketball was 24/7. She was always practicing, doing something with basketball. She was extremely dedicated to the sport.” 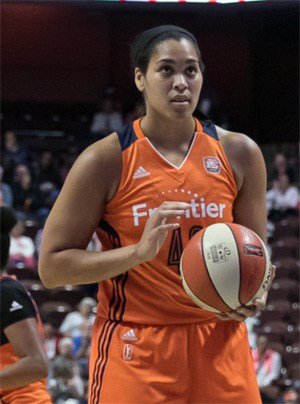 Despite having her senior high school season cut short by an ACL injury, Brionna Jones went on to an All-American career at the University of Maryland and became a first round draft pick in the WNBA where she still plays with the Connecticut Sun.

As a junior, Jones averaged 23.5 points, 11.6 rebounds and 4.2 blocks as the Eagles won the Class 3A state crown with a 27-1 record. She earned Player of the Year honors from Varsity Sports Network and The Baltimore Sun.

“It was just a relief, I think, winning … because we had made it to the finals my sophomore year, but we didn’t finish it,” Jones said. “Finishing it that second year was really special to me and that was probably my favorite memory.”

Jones scored 25 points and had 13 rebounds and four blocks in the 63-48 state championship victory over River Hill. The Eagles only loss that season came against nationally-ranked Riverdale Baptist.

In the regional championship, she scored a career-high 40 points in a win over Milford Mill and Jones said, “That was the first time I ever scored that many points in my life, so that was another big moment for me, just solidifying all the hard work that I had put in.”

As a sophomore, Jones averaged 25.1 points, 14 rebounds and five blocks as the Eagles reached the state title game for the first time in program history. Despite her 29 points and 13 rebounds in the final, the Eagles fell to Frederick, 76-71.

Jones’s inside game brought constant praise from opposing coaches, who were often happy to hold her to 20 or 25 points.

“I like the way she positions herself. She bodies up real well, and she knows how to turn and keep the ball above her head. … She’s a total team player. I wish I had her,” Dunbar coach Wardell Selby told The Baltimore Sun.

In a No. 1 vs. No. 2 showdown with McDonogh, Jones scored 30 points and had 11 rebounds against constant double and triple teams. Her offensive rebound after a missed free throw and the ensuing put-back sealed the 57-51 win for top-ranked Aberdeen.

“I felt we did a really good job on her,” McDonogh coach Brad Rees told The Sun. “She’s just tough. You can’t stop her.”

Unfortunately, an injury did stop her. Jones’ high school career came to an end on Jan. 3 of her senior year when she tore the ACL in her right knee. She had surgery three weeks later.

The injury surely robbed Jones of many more postseason accolades as she missed more than half of the season while the Eagles went on to repeat as state champions. She was so close to 2,000 points and she had been nominated for the McDonald’s All-American Game.

“At the time I was devastated,” Jones said, “but I think it definitely allowed me, when I got to college, to slowly work my way in, so it was kind of a blessing I would say looking back on it now. It just sucks, don’t get me wrong, but going into college, it allowed me time before jumping head first into anything.”

Jones was happy that she had the chance to play with her sister Stephanie and then watch her emerge as a freshman helping to fill the void created by Brionna’s injury. The two would play together in Brionna’s final year at Maryland.

With the Terps, Jones emerged as one of the best players in program history and a first-round WNBA draft pick. She was the No. 8 overall pick in the 2017 draft, taken by the Connecticut Sun.

A two-time All American at Maryland, she scored 1,928 career points, tied for seventh on the Terps all-time list; grabbed 1,209 rebounds, third; and blocked 164 shots, fourth.

That year, Jones also broke the program’s single-season scoring record with 697 points. She also tied the single-game record with 42 points.

Jones, 25, led the Sun last season with 60.5 field goal percentage and averaged 11.2 points and 5.6 rebounds as the Sun came within one game of the WNBA finals, falling in a five-game semifinal.

Earlier this month, Jones signed a lucrative multi-year contract to remain with the Sun.

“I was very excited to be able to come back. We have a great team and I’m glad I get to come back and be a part of it for the next couple years,” said Jones, who will return to the United States to start practice with the Sun in mid-May.

Now, Jones is in the Czech Republic, playing for a team in Prague in her fourth season overseas. Stephanie Jones plays in Europe too although their teams don’t play each other.

“My sister is playing in Poland this season and she’s literally three-and-a-half hours from me, so I can drive and see her. That’s been great for me,” Jones said.

“Overall playing overseas, I like that I’ve been able to travel. I’ve been to France and I’ve been to Spain and I played in Russia, somewhere I never thought I would ever play in my life. That was a great experience and just meeting all the people and experiencing all the cultures is eye-opening.”

Jones isn’t sure what she’ll do after basketball. She had planned to become a pediatrician, but she’s not sure about that now and has also thought about physical therapy as a career. She still has time to think about that.

“I always dreamed of playing in the WNBA for sure, but I never realized about playing overseas and what that meant,” she said. “I have no complaints. I’m enjoying myself and I’ll be doing this as long as I can.”