“Hype” is not a word typically associated with Donovan Smith, owing more to his high school’s low football profile in the Baltimore Metro Area than to his extraordinary talent.

Well before Smith enrolled at Owings Mills High School after moving from his native New York to live with his aunt and uncle, the Eagles were hardly known for their gridiron prowess. 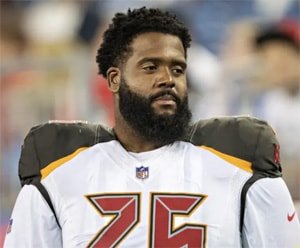 After high school, Donovan starred at Penn State for three years before entering the NFL draft in 2015 where he was selected in the second round by the Tampa Bay Buccaneers. He is now a six-year NFL vet, currently protecting the blind side of Tom Brady.

Before Smith arrived, the program had never won a state title and earned only four playoff appearances since 1986.

Unfortunately for the Golden Eagles, they never qualified for postseason play during Smith’s time there either — and have had only two other such opportunities since Smith graduated — without a championship.

With that in mind, it’s no wonder college scouts were unfamiliar with the Baltimore County Public School’s ability to produce big-time football talent.

Still, it’s difficult to hide a 6-foot-5, 280 pound left tackle prospect who did not allow a sack over a two-year period in high school.

That’s why Smith was “discovered” by recruiters from Syracuse, Rutgers and Michigan State universities — among many other Power Five conference schools — before ultimately choosing Penn State University.

After all, VSN’s No. 1 Offensive Lineman of the Decade was that dominant while performing for a team that had a 53-game losing streak snapped his junior year.

The Nittany Lions certainly took notice and lured him to State College after watching his artistry in the trenches following his arrival on the national scene at the U.S. Army All-American Bowl Underclassman Combine in Texas following his senior campaign at Owings Mills.

That summer, at the prestigious Football University camp in Annapolis, Smith shined again and was named its top lineman.

After that impressive showing, Smith then earned an invitation to the Top Gun camp in Williamsburg, Va., where he was named the top offensive lineman after challenging some of the top national defensive lineman.

Smith more than held his own, winning his biggest test against the most promising defensive end prospect in the Class of 2011, Stephon Tuitt, who would go on to accumulate 27 sacks in his ongoing six-year tenure with the Pittsburgh Steelers.

All of them eventually were signed by NFL teams with Robinson (Chicago Bears), Amos (Bears, Green Bay Packers) and Smith (Tampa Bay Bucs) having the most impact in the professional ranks.

First, though, Smith and his buddies had to learn the ropes in the Big Ten Conference.

It was in State College where Smith really made a name for himself, staying focused enough to polish his craft against stiff competition despite the turmoil surrounding the Jerry Sandusky scandal, the death of legendary coach Joe Paterno and coaching changes from Bill O’Brien to James Franklin.

Although he could have fled to another school while maintaining eligibility during the Sandusky strife, staying true to himself and Penn State said as much about how Smith dealt with adversity as it did about his ability to pancake a rival 5 yards downfield.

“Not a lot of people other than the guys in the locker room can say they have been through what we have been through,” Smith told the postgame.com website. “It groomed us into the men we are today. It (taught) us about integrity and loyalty, because you know, we could have jumped ship without any penalty, but we wanted to stay committed to the university and the fans.”

Smith made the Big Ten All-Freshman team as a rookie after starting nine games for the Nittany Lions, who led the conference in total yardage per game that season.

He started 22 more games as a collegian, growing his game to greater heights and his girth to 335 pounds before entering early for the 2015 NFL draft with one year of college eligibility remaining.

Smith was drafted early in the second round — and 34th overall — at the event by the Bucs, and subsequently earned a spot on the Pro Football Writers of America All-Rookie team with college teammate Amos and fellow Maryland public school star Rob Havenstein (Linganore High School).

Smith started all 64 of the team’s regular-season games in his first four seasons before signing a three-year, $41.25 million contract extension.

According to Pro Football Reference, the then-25-year-old Penn State alumnus ranked 15th among tackles in approximate value while on his rookie contract, which is why the organization felt that he was worth the $27 million guaranteed in the deal.

After all, he had played 99 percent of the NFC South team’s offensive snaps since entering the league, until logging 86 percent of them in a 38-10 blowout win over the Green Bay Packers in mid-October.

Prior to earning some time on the sideline during the lopsided victory, Smith had been on the field for every offensive snap in 2020 while protecting vaunted veteran quarterback Tom Brady’s “blind side” for a team that was considered to be a serious Super Bowl contender.