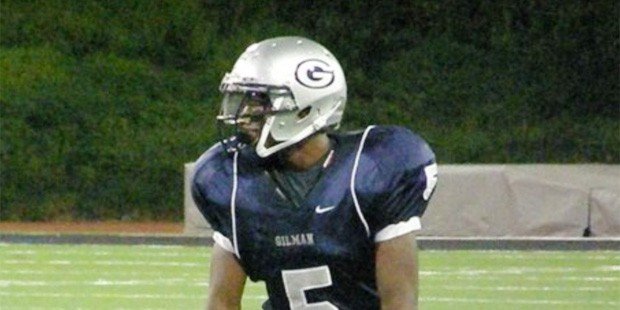 When a variety of veteran Baltimore prep football observers mulled over qualifications for who would be named VSN’s No. 1 Football Athlete of the Decade, there was no doubt who had the most worthy — and wide ranging — résumé. 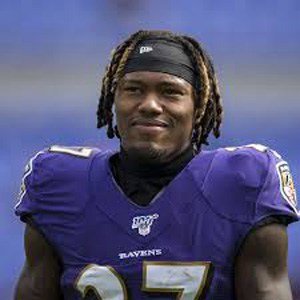 Cyrus Jones won a national championship at the University of Alabama before being drafted in 2016 by the New England Patriots. His NFL career also featured a stint with his hometown Baltimore Ravens where he scored his only professional touchdown, a 70-yard punt return in 2018.

That’s how good Cyrus Jones was during his brilliant career at Gilman, where in addition to being an elite running back with breakaway speed, he was also a deep-threat wideout, and, on occasions, even a quarterback.

Moreover, he returned kicks and punts and was the most feared defensive back in the Maryland Interscholastic Athletic Association.

One can only marvel at all he accomplished on the gridiron his senior year, including 2,365 all-purpose yards with 24 touchdowns for the A Conference champion Greyhounds.

Other notable achievements include 39 receptions for 635 yards and six touchdowns, and a combined 782 return yards on kickoffs and punts.

Five interceptions with a pick-six rounded out Jones’ all-around impressive credentials that lured University of Alabama coach Nick Saban to one of Jones’ basketball games that winter in order to make sure the Gilman star would take his talents to Tuscaloosa and eventually start on the Crimson Tide’s 2015 national championship football team.

Biff Poggi, who coached both University of Notre Dame standouts Ambrose Wooden and Victor Abirimiri for the Greyhounds before Jones arrived, told VSN in 2012 that Jones is the best of a bunch of high-profile Gilman alums that also includes former University of Virginia and Tennessee Titans wideout/returner Darius Jennings.

“He’s a relentless competitor,” Poggi said. “He wants to play 24 hours a day, seven days a week, 365 days a year. When he does not win or give his best, his answer is ‘I want to come back and compete again.”

As a senior, Jones was the main reason why Gilman was able to dethrone reigning MIAA A Conference champion Calvert Hall College High School.

In both encounters against the Cardinals that year, he plunged deep daggers into the their repeat dreams.

Jones hauled in the game-tying score in the fourth quarter of the regular season tussle in Roland Park before his scintillating 97-yard punt return handed the ‘Hounds a key 28-21 come-from-behind victory.

Jones rushed for 156 yards, including a 5-yard run in overtime for a touchdown and a two-point conversion to lift Gilman to a 34-32 triumph in the A Conference finale.

“In terms of a guy with the ball in his hands, he did everything,” said former Calvert Hall coach Donald Davis, who is now at Sidwell Friends School. “He killed us with that return. I don’t think I’ve ever coached against a better player, pound-for-pound.”

The 5-foot-11, 195-pound speedster ended his prep career by playing in the Under Armour All-American game in St. Petersburg, Fla., and was named to the All-State team for the second year in a row prior to enrolling at Alabama.

Jones’ career started slowly with the Tide before switching from wideout to cornerback after Bama routed Notre Dame, 42-14, in the 2012 BCS title game.

As he progressed through the ranks while logging more playing time each season, he ultimately became a reliable playmaker on the 2016 national championship team.

According to the website rollbamaroll.com, Jones “became one of the better cornerbacks in the SEC in his senior season. He improved his coverage skills and also made a huge impact in the returning game.”

The article cited his sixth and seventh career interceptions — including a huge pick on the goal line in a 38-0 beatdown of Michigan State University in the Cotton Bowl — with eight pass break ups and 37 tackles (four for losses) in his final college campaign.

“That was a big moment on a big stage for me,” Jones said about snuffing the Spartans’ bid to cut into the SEC squad’s 10-0 advantage a few minutes before halftime.

It wasn’t the only big play the Cotton Bowl’s Most Outstanding Defensive Player would make in the game.

His dazzling 57-yard punt return for a touchdown late in the third quarter had “us reeling a little bit,” Michigan State coach Mark Dantonio told the Fort Worth Star Telegram after the game.

“The interception was a big momentum swing for us,” Saban said.

And the punt return, one of four resulting in touchdowns, showed why Jones led the nation in punt returns. He finished the season with a 12.5 return average on 54 attempts for 673 yards.

In the national championship game, four of his five tackles were unassisted in the Tide’s classic 45-40 victory over Clemson University.

He was rewarded by being the 60th overall pick in the 2016 NFL draft by New England Patriots and played 31 games for three teams, 13 of them with the Baltimore Ravens.

It was with his hometown team that he scored his lone NFL touchdown in 2018 on a 70-yard punt return against the Oakland Raiders with the Ravens trailing, 7-3, early in the third quarter at M&T Bank Stadium.

“That meant a lot to score my first NFL touchdown,” Jones said. “And to do it with my hometown team was cool.”

After being released by the Ravens and subsequently signed by Denver, Jones was sidelined last November when a congenital coronary defect required open-heart surgery.

He said that he is close to being ready to play again after an extensive rehabilitation period.

“I’m ready to go,” he said. “I’m just waiting for clearance from my doctor.”