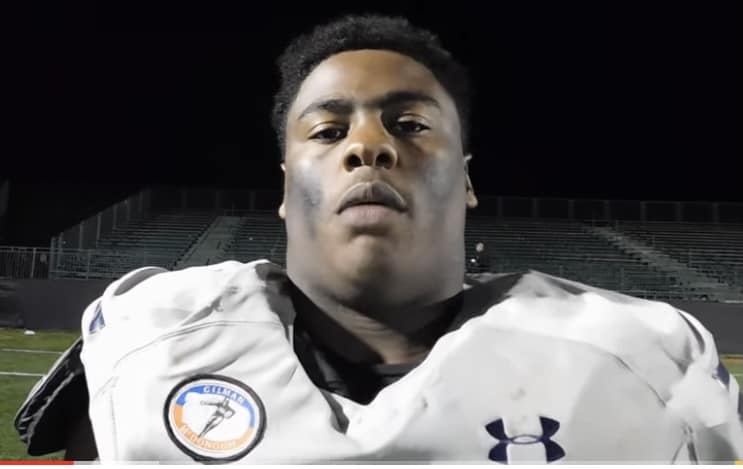 During a 2015 football game between Archbishop Spalding and Gilman School, Greyhound defensive linemen Ellison Jordan pursued a Cavalier running back towards the Spalding sideline.

After his momentum took him out of bounds, Spalding coach Kyle Schmitt gently grabbed Ellison before going back to the field.

“Stay here,” Schmitt said. It was playful gesture by Schmitt, whose team was demolished by the Greyhounds.

Ellison, VSN’s No. 1 Defensive Linemen of the Decade, was a human wrecking ball for Gilman. The Greyhounds lorded over the MIAA A Conference for two decades, suffocating opponents with line play that could rival some college programs.

At 6-foot and 270 pounds, Ellison was among the best in a plethora of talented Gilman linemen.

“He was just an awesome player…great motor and love to play the game,” said former long-time Gilman coach and current St. Frances Academy co-coach Biff Poggi. “He was a joy to coach. He was a kind soul when it came to football.”

“Kind soul,” was the last thing opposing players thought of Jordan. He capped his four-year career with 17 sacks in 2015, setting a school-record (52). He had 55 tackles (15 for loss) and forced three fumbles, earning VSN’s Defensive Player of the Year honors.

An Under Armour All-American, Jordan was named the Consensus All-State Defensive Player of the Year. He joined former teammate Henry Poggi and former NFL performer Victor Abiamiri as the only Greyhounds to be named the top high school defensive performer in Maryland.

“They pushed me every day like I pushed them and others to make me better and vice versa,” said Jordan, who started all four years at Gilman.

After starting at nose guard his freshman season, Jordan moved to tackle and his relentless style flourished. He had 50 tackles and 11 sacks, earning the first of three consecutive first-team All-Metro selections.

Biff Poggi said there was never a shortage of effort with Jordan.

“The hardest thing with coaching him was getting him to slow down in practice against the team,” said Poggi.

Jordan posted 16 sacks as a junior, helping Gilman acquire a share of the MIAA A title (with McDonogh School). The Roland Park school won crown outright in 2015 (13th in 19 seasons) as Jordan and the Greyhounds outlasted McDonogh in the rivals’ landmark 100th meeting.

It was a perfect ending for Jordan, who went 34-10 with three MIAA A championships. An Upper Marlboro resident, Jordan had to be up by 4:30 a.m. daily to get a bus and travel to Baltimore and reach Gilman’s campus by 8 a.m. He usually got home between 8-9 p.m.

“My family made sacrifices to help me be successful,” said Jordan. “I owe them everything. Despite the road, literally, being a tiring one, it was worth it to us.”

Jordan left Penn State. He transferred to Bowie State, just a few miles from his Upper Marlboro home, for a fresh start.

“They [Bowie State] were the only school that took a chance on me,” said Jordan, who’s working on his Master’s after earning a Bachelor’s in Communications at Penn State.

Though the 2020 Bulldog season was cancelled, Jordan is taking advantage of the extra time to “get right mentally, spiritually and physically.”

After graduating from Gilman, Jordan played at Penn State University where injuries hampered him. He’s now at Bowie State as a graduate transfer and looking forward to playing in the fall of 2021.

“My football career has been at a halt, but I am not done…I still have a lot to prove, but I still have talent I can show people,” said Jordan. “I’m up for the challenge.”