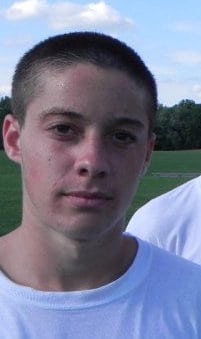 But for Campbell, Nov. 6, 2012 was the day everything changed. McDonogh lost to Calvert Hall College in the MIAA A Conference quarterfinals.

It marked the first time, McDonogh, the dominant entity in MIAA A soccer, failed to reach the championship round since 2005.

“It still bothers me to this day,” said Campbell, who was a junior captain for the Eagles in 2012. “When it came to my development that season was beneficial.”

Campbell matured as a player and leader, and helped McDonogh return to the top of the MIAA A. Campbell is VSN’s No. 1 Boys Soccer Midfielder of the Decade.

After starring at McDonogh School, George Campbell played three positions at the University of Maryland. Campbell was VSN Player of the Year in 2013.

Quaranta, who also coached Campbell on the club circuit with Baltimore Bays and Baltimore Celtic, remembers seeing Campbell for the first time as a 10-year old.

“I kept hearing about this kid nicknamed “Wheels,” and had to check him out. Three minutes into you saw those special qualities – quick and aggressive – but completely relentless,” said Quaranta. “He wears people out.”

“Honest player who gave you honest effort on both sides of the ball,” said longtime Archbishop Curley coach Barry Stitz. “He wasn’t the biggest or fastest, but he was a complete player.”

Campbell was mentored by veterans Julian Griggs, Malcolm Harris, Matt Shinsky and Mike Gamble (2011 VSN Player of the Year) in his first two seasons at McDonogh. The Eagles won the MIAA A crown in 2011.

“Everybody had a clear cut role. Every single guy knew what they were doing and brought in to the idea of winning,” said Campbell.

With a young roster, McDonogh went a respectable 10-4-3 in 2012, but was absence from the MIAA A final round.

“We weren’t a connected team and got away from the McDonogh culture,” said Campbell, who was Gatorade Maryland Player of the Year in 2012. “I didn’t do a good job bringing everybody together.”

It was the “first serious letdown” soccer-wise for Campbell, who dived into the club season with a sense of purpose. The Eagles rebounded with an undefeated season and another MIAA A title.

“We were confident…you respect who you’re playing, but, at the same time, you know what you can do,” said Campbell. “We were ready to get after it from the first whistle.”

Campbell matriculated to Maryland where he netted four goals in the final seven games of his freshman year. The following season, Campbell had the first hat trick by a Terp player in a decade.

Injuries started piling up for Campbell, who had sports hernia surgery after his sophomore campaign. Campbell became a reserve and moved from forward to midfield.

He made another adjustment, going from offense to right back on defense in his senior season in College Park.

“It was a total transformation of my playing style and who I was,” said Campbell. “I really love the Maryland program. I knew I wasn’t guy making the headlines, but I was willing to do a job the team needed me to do.”

Campbell said his “competitive days are behind him,” focusing on his job in insurance, individual soccer training in Harford County and wedding next year.

“Soccer opened up so many doors I don’t think I would’ve been exposed to,” said Campbell, who got his insurance job through longtime friend and former Gilman School standout Sam Wancowicz. “It helped to me to McDonogh, college…soccer brought me and my fiancee together.”