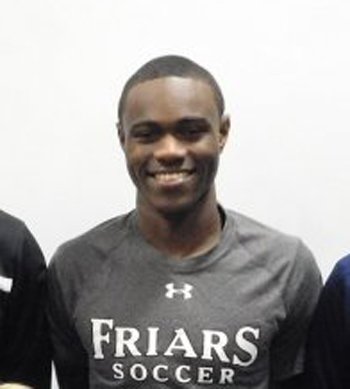 Though he lived a few minutes from Archbishop Curley High, Tre Pulliam didn’t know of the school until shortly before visiting as an eighth-grader in the fall of 2010.

The rest is history. Pulliam assembled one of the greatest soccer careers at the Sinclair Lane school, earning him VSN’s No. 1 Boys Soccer Forward of the Decade.

A four-year starter, Pulliam, VSN’s Player of the Year in 2015, totaled 74 goals and 25 assists for the Friars. His 74 tallies are second to Giuliano Celenza’s all-time program mark (77).

Celenza, one of the greatest soccer players in MIAA A history, led Curley to two championships (MSA A in 1993 and MIAA A in 1997) and was two-time Northeast Conference Player of the Year at UMBC. He played 11 seasons professionally for the Baltimore Blast indoor team, winning five championships.

“I remember watching him with the Blast,” said Pulliam who met Celenza while at Curley. “It’s humbling being mentioned with him.”

Stitz, who’s been part of Curley soccer as a player and coach for four decades, said Pulliam “had a short memory.”

“He could have a game where he didn’t finish two or three chances, but finish the next two. Some guys would get down on themselves, but he was going to keep plugging away,” said Stitz. “He liked the role of ‘go-to guy.’”

Tre Pulliam (left) pursues the ball for FC Baltimore Christos semi-pro soccer team during a 2019 match. The 2015 VSN Player of the Year at Archbishop Curley, Pulliam went on to star at UMBC.

“Curley is a technical team, but he was a guy you had to account for and his pace was game-changing,” said Gilman School coach Jon Seal. “You could be in the right spot defensively, but he was so talented and fast, he could still get a scoring opportunity.”

The only freshman on the Friar varsity in 2012, Pulliam said he was “a little arrogant.” He was quickly reigned in by senior Mike Sauers, who went on to play at Maryland.

“I learned how to become a better teammate,” said Pulliam, who called Sauers, “the best teammate he’s ever played with.”

“I never had to look after my teammates,” added Pulliam. “You had to set an example on the field and in school. Everybody’s now watching me.”

Pulliam, who was captain his final two seasons, netted 29 goals and 15 assists over his sophomore and junior campaigns to lead Curley to the MIAA A semifinals.

His senior season started on the sidelines, suspended the first two matches for a red card in the Friars’ 2014 MIAA A semifinal match. Curley was middling at 9-8, but Pulliam and the Friars came together.

Curley won its next eight straight matches, including a 2-1 victory over rival Calvert Hall College in the MIAA A semifinals. Pulliam scored the tying goal in the final two minutes of the first half and set up the game-winner with 23 seconds to play in the second.

In the MIAA A title game at CCBC-Essex, Pulliam got the Friars on the board in the opening five minutes, but No. 1 McDonogh School rallied for 2-1 victory.

“It was about us catching up with each other,” said Pulliam, who netted 10 goals and six assists over Curley’s last nine matches.

The All-Metro Player of the Year in 2015 and a four-time All-MIAA A selection, Pulliam turned down scholarship offers from North Carolina State and Ohio State, opting to stay home and play for UMBC. He totaled 20 goals and nine assists in four seasons.

“This was another stage of maturity, going from a boy to a man,” said Pulliam, who now plays for FC Baltimore Christos of the National Premier Soccer League.

Pulliam, 23, still regrets the red card at the end of his junior season at Curley that cost him the opportunity at the school’s all-time scoring record. The Friars won 53 games and reached at least the MIAA A semifinals in Pulliam’s four seasons.

He credits his mother, who didn’t want him to attend public school, for leading him to Curley.

“They (Curley) made me feel welcomed,” said Pulliam, who started 88 matches. “It was lovely having my neighborhood friends coming to my games. It was all love.”