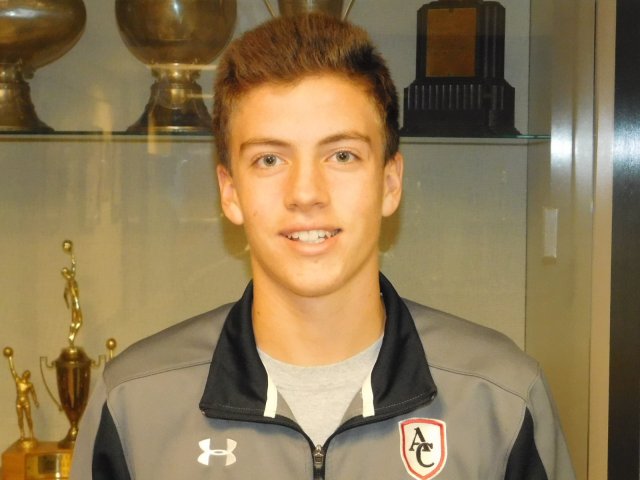 Playing defense has been in Nick Richardson’s blood.

“I’ve always had that tenacity….if you don’t give up goals, you’ll win,” he said.

Richardson, VSN’s Boys Soccer No. 1 Defender of the Decade, was a goalie when he started playing soccer at age eight before moving to the back. He’d leave his mark at Archbishop Curley and the MIAA A Conference.

“He’s the best defender I’ve seen at Curley, even as a freshman,” said Seal. “He got better and better…he was difficult to beat one-on-one and allowed Curley to push numbers forward. He can lock down a defensive-third of the field by himself.”

“From the day he stepped on the field, he was playing 80 minutes,” said Curley coach Barry Stitz, who first coached Richardson on the Fewster club team. “He didn’t care that he was a freshman going up against kids 25 pounds bigger than him.”

Nick Richardson was an impact performer for the University of Maryland’s men’s soccer in 2019. The former Archbishop Curley star was VSN’s Defensive Player of the Year in 2016 and four-time All-MIAA A Conference selection.

Only 140 pounds as a freshman, Richardson said he “had to adjust playing against” established and talented players in one of the nation’s best high school soccer leagues.

“Top to bottom, there’s no games off,” said Richardson, who credited former Friar standout Tre Pulliam for indoctrinating him to the pace of play. “You’re seeing players going to high Division I programs.”

Richardson was a two-way threat at center back, posting 17 goals and 20 assists in four seasons. He helped to the Friars to the MIAA A final in 2015 and 2016, but wasn’t able to put a championship on his impressive resume.

“I brought a good attitude to practice,” said Richardson, who was captain in his final two seasons and trained with the U.S. National under-17 squad. “We performed very well, but was unlucky in the finals. We had some great times.”

Richardson chose to stay home and play for the University of Maryland. He redshirted after suffering a torn PCL in the summer of 2018.

The Terps won the Division I national title in the fall of 2018. Richardson started all 21 matches last fall, earning Big 10 All-Freshman honors.

Richardson is looking forward to the spring soccer season (Big 10 cancelled fall season due to the Covid-19 pandemic). He and Wake Forest’s Mike DeShields (McDonogh School) are the only members of VSN’s 10th anniversary team currently in the college ranks.

“Hopefully, I can take my game to the next level,” said Richardson, who played . “It’s going to take a lot of work and a lot of growing.”