10 YEARS OF EXCELLENCE: VSN’S NO. 1 BOYS LACROSSE DEFENSIVE PLAYER OF THE DECADE 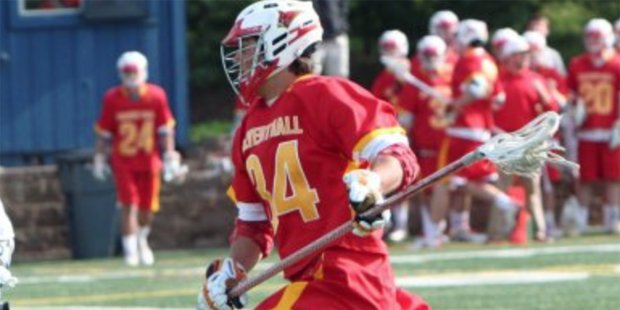 by Nelson Coffin
Despite being away from the sport’s hotbed for 10 years, Garrett Epple didn’t take long to become a dominant close defender for Calvert Hall College High School.
His rise was a circuitous one prior to becoming a top player on the Cardinals’ talented lacrosse and football teams early in the decade.

His lacrosse skills may have been raw early in his career at Calvert Hall, but Garrett Epple developed into a First Team All-American at Notre Dame and a professional star in the MLL and PLL.

Although he was born in Baltimore and his father, Carl, was a member of Calvert Hall’s last unbeaten football team in 1982, the family moved to Florida, making Garrett the new kid on the block when he returned to Charm City from the Sunshine State.
“We started a rec lacrosse team down there,” Epple said. “But football is king in Florida, so I played that, too.”
Back in Maryland, Epple, VSN’s No. 1 Boys Lacrosse Defender of the Decade, had to prove to some of his more experienced rec team buddies that he could more than hold his own on the field.
“Who’s the guy from Florida,?” was a question that future Calvert Hall teammate Stephen Kelly posed when they both played for championship Lutherville-Timonium Rec lacrosse squads before entering high school.
Epple quickly convinced Kelly and other doubters that he was the real deal.
“He was our best defenseman,” said Kelly, VSN’s No. 2 Boys Lacrosse Midfielder of the Decade. “Garrett was a force of nature, and good enough to start on close defense as a freshman at Calvert Hall. He loved to compete and had a great knowledge of the game.”
Epple was also a valuable contributor on face-off situations.
“When we really needed a ground ball, we’d put Garrett on the wing,” said Calvert Hall coach Bryan Kelly, VSN’s Boys Lacrosse Coach of the Decade and Stephen Kelly’s uncle. “We could put him almost anywhere on the field. He was that good.”
Stephen Kelly and Epple would eventually play Major League Lacrosse on the same Chesapeake Bayhawks team and earlier this summer were teammates in the Premier Lacrosse League All-Star Game in San Jose, California.
Epple said that when he arrived at Calvert Hall as a growing 175-pound freshman who would blossom into a 6-foot, 200-pound athlete, the Cardinals “were never favored to win” an MIAA A Conference championship in lacrosse.
They did reach the final in 2011, only to lose, 13-8, to a top-notch Gilman squad that featured future All-World midfielder Ryan Tucker and Epple’s eventual Notre Dame teammate Conor Doyle.
“We just couldn’t get over the hump,” Epple said.
After the Cardinals blew a five-goal lead to fall, 11-10, to Conestoga (Pa.) early the next season, they developed a new philosophy and became champions a couple of months later.
“The Conestoga game turned out to light a fire under us,” said Epple, a commercial real estate broker in San Diego and an assistant boys lacrosse coach at Torrey Pines High School. “The flip side was getting over the hump and winning the championship by beating Loyola (Blakefield). To do that with your best friends was great.”
Calvert Hall’s chances to repeat in 2013 suffered a serious blow when he broke his collarbone just before the playoffs.
Bryan Kelly said that Epple had taken a huge step that season to evolve from a take-away specialist to an all-around star.
“I told Garrett that he was going to have to become more of an off-ball defender if he expected to play right at Notre Dame,” the coach said. “And he did that. He became an incredible off-ball defender. He’s just so talented. He became a complete player, and no one was as physically dominant as he was.
“Garrett could do it all,” Kelly continued. “He was really good on and off the ball, was great off the ground and we used him on some EMO, too.”
Kelly said that the Cardinals even devised a play for the final seconds of a game to take advantage of Epple’s superb passing skills.
At Notre Dame, Epple was a 2017 First Team All-America selection who played in 59 of 60 games during his career in South Bend and was a starter in 48 of his final 49 collegiate contests.
As a senior, Epple totaled a team-best 27 caused turnovers and was a man on a mission in a loss to Maryland, which went on to win the national championship with former Boys’ Latin star Colin Heacock playing a key role.
Epple, though, torched the Terps by causing four turnovers, scooping up six ground balls and holding eventual Tewaaraton Award winner Matt Rambo scoreless.
No. 2 Defender: BJ Farrare, McDonogh
No. 3 Defender: BJ Burlace, 2019, St. Mary’s
No. 1 Attackman: Shack Stanwick, 2014, Boys’ Latin
No. 2 Attackman: Jacob Kelly, 2018, Calvert Hall
No. 3 Attackman: Jackson Morrill, 2016, McDonogh
No. 4 Attackman: Patrick Kelly, 2012, Calvert Hall