10 YEARS OF EXCELLENCE: VSN’S NO. 1 BOYS LACROSSE ATTACKMAN OF THE DECADE 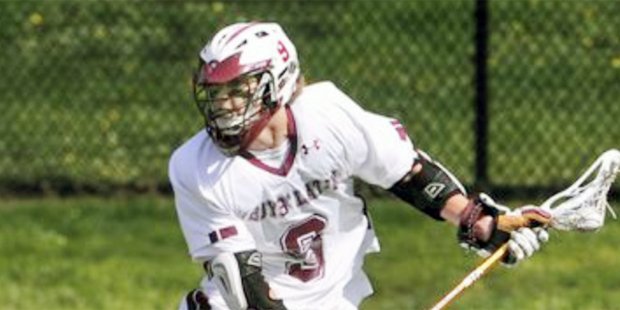 by Nelson Coffin
When it comes down to the all-time greats in the rich history of the Boys’ Latin lacrosse program, few players can top what Shack Stanwick accomplished during his four-year varsity career for the Lakers.
And no other former Laker star can match his all-time BL best 137 goals, 201 assists and 338 points he accumulated from 2011-2014.

Just as he did at Boys’ Latin, Shack Stanwick wrote his own pages into the storied lacrosse record book at Johns Hopkins University.

The shifty and silky smooth Stanwick set the standard for what it means to be a productive player, one who affected every game in which he played by running the offense effectively, efficiently and, quite often, spectacularly.
VSN’s No. 1 Boys Lacrosse Attackman of the Decade was rated the No. 1 recruit (by class year) in the country for four consecutive years by Inside Lacrosse.
As a freshman ready to show he deserved such high regard, he played on the same BL team with his brother Wells and scored a goal in an 8-7 victory over McDonogh in an MIAA A Conference quarterfinal.
That game set the stage for a Shack-to-Wells goal in a rally that would ultimately send a semifinal match against eventual champion Gilman into overtime. The Greyhounds prevailed, 8-7.
By his sophomore year, he was becoming the engine that drove a talented team back to the A Conference semifinal round, falling to 2012 winner Calvert Hall, 11-10, despite Stanwick scoring a goal and adding three assists.
His junior year was even better — until the last game of the season, that is.
Stanwick’s 31 goals and 56 assists that spring were indicative of the major impact he was having on a squad that won its first 19 games before dropping a taut 10-9 verdict to a Loyola Blakefield outfit in the A Conference final that went 3-6 in league play until catching fire in the postseason.
He did, however, exact some revenge from Calvert Hall by making an acrobatic catch above his head of a clearing pass on the dead run, racing toward the goal and depositing a shot past the stunned Cardinal keeper — all in seemingly one fluid motion — in a semifinal triumph.
Even so, the setback to the Dons, in which he contributed a goal and two feeds, only made Stanwick hungrier to finish the job in 2014.
The Lakers would not be denied that spring, and a large part of their success can only be attributed to Stanwick’s monster numbers that year — 46 goals and 72 assists — while setting the school’s single-season record for points (118) for coach Bob Shriver’s 18-0 juggernaut that finished as the top-ranked team in the nation.
The three-sport star (basketball/soccer) never scored less than four points per game during the perfect lax season, the exact output Stanwick produced (2 goals, 2 assists) in the 17-11 victory over archrival St. Paul’s in the championship tilt after notching four goals and an assist in a 16-10 win over McDonogh in a semifinal.
He also contributed an assist to the victorious South All-Stars in the Under Armour Lacrosse All-America Classic at Johnny Unitas Stadium a couple of months later.
Stanwick said that winning the A Conference 2014 title was definitely a highlight of his BL days.
“That’s the ultimate goal every year as a competitor,” said Stanwick, who currently lives in D.C. and works in commercial real estate. “It was sweeter because, after that loss to Loyola, it was our last run.”
He also said that team trips to Florida, Shriver’s speeches and walking onto the J Duncan Smith Field with a full contingent of BL students on hand to cheer the Lakers on are other fond memories from high school.
The youngest of eight siblings of Division I lacrosse standouts was asked if he felt pressured to live up to his family’s success level — or did it give him the incentive to excel?
“It was a little bit of both,” he said. “But it was more of an incentive (to do well).”
Moreover, he said he learned from his older brothers and sisters that athletic careers go by quickly, so they instilled in him the value of hard work — on and off the field.
Sticking close to home, Stanwick was a steadying force and a four-year starter at Johns Hopkins University for coach Dave Pietramala.
He blossomed in the playoffs of his rookie year with a three-goal, two-assist effort in a win over the University of Virginia and then pumped in four goals and chipped in with two feeds in a victory over Syracuse University.
As a sophomore, Stanwick led JHU with 58 points on 20 goals and a team-high 38 assists and continued to top the scoring chart the following season with 26 goals, 21 assists and 47 points.
As a senior, he finished with 18 goals and 35 assists — and was named an Honorable Mention All-America for the third time.
Stanwick finished his collegiate career tied for seventh — with former Calvert Hall star Ryan Brown — on the Blue Jays’ all-time points list with 209, one more than Wells totaled in his top-notch tenure at Homewood.
Shack also produced at least one point in 48 consecutive games, tied for second in program history with Brown and Brian Piccola.
He would go on to play one year of professional lacrosse, scoring five goals with eight assists in four games for the Boston Cannons.
No. 2 Attackman: Jacob Kelly, 2018, Calvert Hall
No. 3 Attackman: Jackson Morrill, 2016, McDonogh
No. 4 Attackman: Patrick Kelly, 2012, Calvert Hall