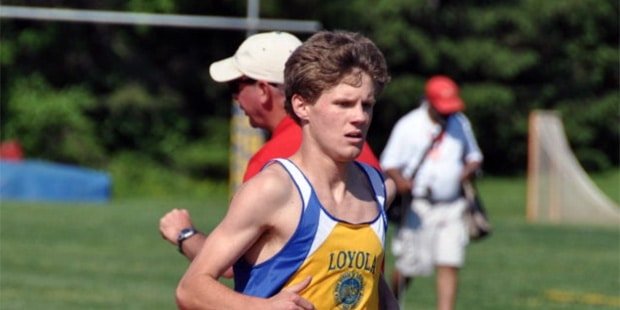 As daunting as it is to pick the best of the best in any sport, four VSN Cross Country Runners of the Decade (2010-2019) made the process relatively easy. 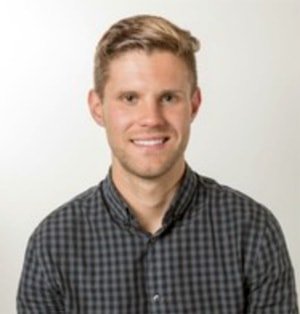 These days Matt Jablonski has turned to cycling for his competitive fix, when he is not working his day job as an account executive Mapbox in Virginia.

The top pick, Loyola Blakefield standout Matt Jablonski, started the decade with a phenomenal 2010 campaign by placing second at the 2010 Nike Cross Country Nationals Southeast Regional to qualify for the Nike Nationals in Portland, Ore., zipping through the 5,000-meter course in 15:18.5 at the WakeMed Soccer Park in Cary, NC.

The University of Oregon recruit was edged by .4 of a second by Armando Del Valle of Hellions Cross Country of Miami, Fl.

Even so, to qualify for the national meet was a rarity for local distance runners — or any other runner.

“In my 25 years of coaching there have been only two boys from the (Baltimore) metro area to advance to the National Cross Country Championships,” Loyola assistant coach Chris Cucuzzella told VSN in 2010, noting the earlier accomplishments of Calvert Hall’s Corey Smith (1996) and Broadneck’s Matt Centrowritz (2007), a fellow Oregon alum who would go on to win the gold medal in the 1,500 meters at the 2016 Summer Olympics in Rio de Janeiro.

Prior to the national exposure, Jablonski led the Dons to their second straight MIAA A Conference crown by blowing away the field in the championship meet at Oregon Ridge Park in what was thought to be a course record (15:11) while crossing the finish line 48 seconds ahead of Kikanae Punyua of Glenelg Country School.

That team victory set the stage for Loyola to dominate the decade by claiming six more league titles in that span.

“To win on my home turf (at Oregon Ridge) in a place about a mile from where I grew up with some of my closest friends was one of he best moments of my high school (cross country) career,” said Jablonski, an account executive with Mapbox and living in Washington, D.C. “The hard part was done (by training) and the race was the fun part. I was just one of the five other guys who scored. It was very gratifying to accomplish what we did.” 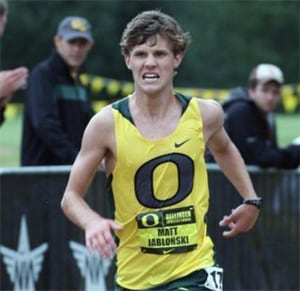 Injuries impacted Matt Jablonski’s college career at the University of Oregon, but he remained competitive all four years in one the nation’s most elite running programs.

With those accomplishments to recommend him, the Cockeysville native would go on to run for one of the nation’s most iconic collegiate programs.

“Matt was basically a soccer player who did some running,” Albornoz added. “But then he gave up soccer and concentrated on running. Matt won (the Korrow Invitational) in 2007 when he was 14 with a time of 17:33.”

Jablonski ran cross country and played center-midfield for the Dons’ soccer squad for three years before devoting all his time to running.

“Soccer was my first love,” he said.

Yet running was clearly going to afford him the best opportunity toward being a Division I athlete.

“Oregon has such a rich running tradition,” he said. “Just being a part of that environment and in a program where I had the opportunity to be on a team with world-class athletes and win national championships was special.”

“I went through a lot as an athlete at Oregon,” he explained. “Athletically, you’re held to a high bar every day for four years, which brings out the best in you, but can also take a toll mentally and physically. I’m proud of what I was able to accomplish, but the reality is there were guys on many days that were simply just better than me.”

At Loyola, Albornoz didn’t have to worry about Jablonski’s health very often — if at all.

“Matt had a beautiful stride,” Albornoz said. “You just can’t teach some of the things he had. And even though he put in heavy, quality mileage, he never got hurt in cross country.”

By the time he was a senior at Oregon, Jablonski bounced back to earn 11th place at the 8,000 meter Bill Dellinger Invitational in 24:48, improving over a 41st-place finish as a freshman.

He came in seventh at the Charles Bowles Invitational in 24:27 and fourth at the USATF Oregon State Cross Country Championships in 25:48.2 over the same distance in his final year with the Ducks.

These days he has traded in his running shoes for cycling cleats while competing with a cycling team.

“My background as a runner compliments my new athletic focus area, which is cycling,” he said. “The development I went through all those years as a runner has allowed me to have some good results in the local amateur cycling circuit.”