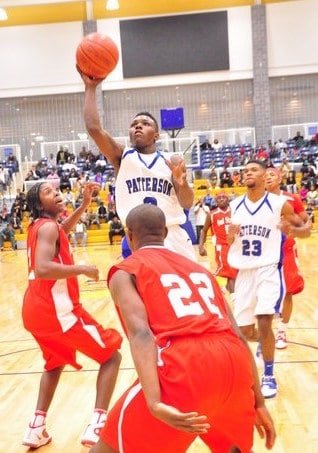 Baltimore high school basketball has produced its share of diminutive guards. Tyrone “Muggsy” Bogues, all 5-foot-3 of him, was the most feared player on the iconic Dunbar squads of the early 1980’s. Five-four Shawnta “Nut” Rogers was the undeniable go-to during his four-year varsity career at Lake Clifton.

“He was a dynamic, powerful explosive little guard,” said Tom Strickler, recruiting analyst for National Recruiting Report “He always surprised you with something new.”

Carr, VSN’s No. 1 Boys Basketball Guard of the Decade (2010-11 school year to 2019-20), captivated Baltimore basketball during his three years at Patterson. He’s first player to win consecutive VSN Player of the Year honors.

But awards were a small part of the story. At just 5-foot-6, Carr’s quickness, dazzling ball handing skills, and freakish leaping ability (48-inch vertical) made him a social media darling.

He was Baltimore high school’s first (and only, even a decade later) standout of the You Tube generation.

As a freshman in 2009-10, Carr averaged 25.5 points, eight assists and 5.3 rebounds. He recorded a triple-double in his first game and scored 39 points against Lake Clifton, featuring Josh Selby, the nation’s top senior and eventual All-Met Player of the Year.

Carr dropped 61 points against Forest Park in a holiday tournament. His dunk against City College and eventual Maryland guard Nick Faust is widely called “The Dunk Heard Around Baltimore.”

Strickler, who has followed the Baltimore area’s top recruits for more than 30 years, was in attendance inside City’s gym with a St. Joseph’s University assistant coach.

“We looked at each other like ‘what just happened?’ It was out of Ripley’s Believe It or Not,” said Strickler. “He was stunning in everything he did on the court.”

In his sophomore season, Carr averaged 32 points, six assists and five rebounds, leading Patterson to its first city title. The Clippers reached the Class 4A state title game, and Carr, was named VSN’s Boys Basketball Player of the Year.

Patterson won its first state championship (Class 3A) in 2012 as Carr averaged 24 points, five assists and three steals. He repeated as VSN’s Player of the Year.

He was nicknamed “The Crime Stopper” because crime in East Baltimore supposedly decreased during his games. Carr made the cover of Dime Magazine, which called him “the country’s most exciting high school player.”

GQ and CNN ventured to Charm City to do features. His numerous mix-tape videos on the internet had millions of views.

Aquille Carr played briefly for Delaware in the NBA’s D-League in 2013 after forgoing college. The dynamic guard won back-to-back VSN Player of the Year awards and scored nearly 2,000 points in three seasons at Patterson.

Carr’s meteoric rise took a sudden u-turn. Carr, who committed to Seton Hall in January 2012, transferred from Patterson after the 2011-12 season to New Jersey’s St. Patrick’s, then Arlington Day Country in Florida before settling at Princeton Day Academy in Prince George’s County, looking to improve his academic standing.

Carr had off the court issues. He decided not to attend Seton Hall and pursue a professional career.

Carr was drafted in the 2013 G-League Draft the Delaware 87ers. He had short stints in pro leagues in Cyprus and Canada, and played a few seasons for the Baltimore Hawks of the American Basketball Association.

Carr, who scored 1,990 points in three seasons at Patterson, never reached heights of Bogues, who starred at Wake Forest University before playing 14 seasons in the NBA (shortest player ever to play in league), or Rogers, who was the Atlantic 10 Conference Player of the Year in 1999 at George Washington (member of school’s athletic Hall of Fame) and played a decade professionally in Europe.

Though years have passed, Carr doesn’t want to be thought of as a “playground legend.”

“I know it’s going to be hard,” said Carr. “Everything in my life has been hard, but I’m a professional basketball player.”