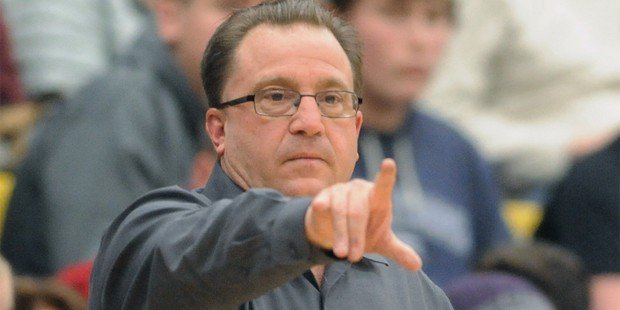 Melanie Clatchey gives the same answer whenever someone asks if her husband Pat played basketball at Mount St. Joseph.

“He was a bench warmer,” Melanie says.

Well, the former reserve has had a ginormous influence on Mount St. Joseph basketball. Pat Clatchey is VSN’s Boys Basketball Coach of the Decade.

The Irvington school won four Baltimore Catholic League Tournament titles and three MIAA A Conference championships between the 2010-11 and 2019-20 seasons. The Gaels, who won four BCL regular season titles in that stretch, reached the tourney final in 2016, 2018 and 2020, and played in all but two MIAA A title games.

For four decades, Clatchey has set a standard few have reached in Baltimore basketball.

“St. Joe’s displayed patience for us to build a program and put things in place…the thing I’m most proud of is the level of consistency,” said Clatchey, a 1980 MSJ graduate. “We’re competing for championships and winning more than our fair share.”

Pat Clatchey discuss strategy with his Mount St. Joseph basketball squad during a 2020 game. He won nearly 300 games in the past decade at his alma-mater, along with four Baltimore Catholic League Tournament titles and three MIAA A Conference championships.

In 29 seasons, Clatchey is 722-155 with a record seven BCL Tournament championships, and 10 regular season titles.

Not bad for a varsity reserve in his freshman and sophomore year at St. Joe. Clatchey was 20 when he was hired as freshman coach.

He served four years before becoming an assistant at UMBC for three seasons. Clatchey spent a year with a basketball scouting service before returning to Irvington in 1992 to take over the Gaels’ varsity.

Before then, Mount St. Joseph had never won a BCL regular season or tournament championship.

Clatchey, who grew up in Southwest Baltimore and played at Bentalou Rec Center and Gwynn Falls Park, said developing the right student-athletes have been instrumental in St. Joe’s success.

“OKG, our kind of guys…guys who fit the school that have character and is a capable student,” he said. “Guys who have talent and ability, but also willing to work and be coached.”

The Gaels won 291 games during the past decade (2010-11 thru 2019-20), including five 30-plus win seasons. The Southwest Baltimore school won three consecutive BCL Tournament championships.

“I think those guys were good players, but they complimented each other really well,” said Clatchey. “A lot of times the coach has to make it work, but the players buy in and sacrifice a little bit.”

Smith, a two-time VSN Player of the Year, was selected by the Phoenix Suns in the first round of the 2020 NBA Draft.

“He’s a very astute evaluator of both talent and character,” said Boys’ Latin School coach Doug Nicholas, a former Clatchey assistant. “He goes after kids who possess these qualities and puts them in the best position to be successful as individual players within the team concept.”

“You come as the young man, now you’re the older guy in the league,” said Clatchey, who recently turned 60. “I’ve always tried to be a constant learner and student of the game…always looking to improve and tweak things, here and there.”