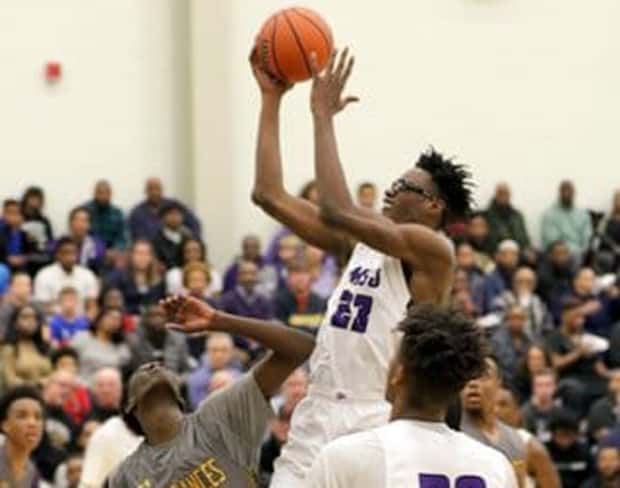 Before a mid-November practice back in 2014, Mount St. Joseph basketball coach Pat Clatchey was talking to a reporter when he pointed to a skinny freshman sitting against a wall inside of The Smith Center.

“He’s got a chance to be a pro,” said Clatchey, the longtime Gaels coach.

Jalen Smith has lived up to lofty expectations. The former St. Joe star is VSN’s Boys Basketball’s No. 1 Center of the Decade.

Clatchey, the dean of Baltimore area coaches, remembers a play Smith made at Mount St. Joseph’s summer camp before the start of his freshman year.

“Jalen had the ball on the wing and he faked right, went left down the lane and dunked on this kid left-handed. The place went crazy,” said Clatchey. “Coach Nicholas (Gaels assistant coach Doug) came over and whispered in my ear, “This might be our first McDonald’s All-American.”

Smith would become a McDonald’s All-American in his senior year, the highest honor in the most decorated career for an area boys basketball player the past decade. He’s the second player to win VSN’s Player of the Year honors twice.

Before the awards and becoming one of highest-ranked players out of Baltimore, Smith was a quiet, google-wearing, 6-foot-7, 180-pound freshman with an unlimited ceiling nicknamed “Stix.”

“He was intriguing,” said Tom Strickler, who has closely followed Baltimore area recruits for more than 30 years. “He missed a lot of easy shots his freshman year, but there was something about his gait, his mannerisms.”

After winning the MIAA A Conference and Baltimore Catholic League Tournament championships in 2017, Smith hooked up with former MSJ teammate Darryl Morsell at the University of Maryland and led the Terps to a NCAA Tournament appearance and Big 10 regular season title during his two seasons.

After averaging eight points and six rebounds his first year, Smith was ranked No. 8 nationally in the Class of 2018 by Scout.com. He started blossoming the next season, helping the Gaels to the MIAA A Conference and Baltimore Catholic League Tournament finals. Smith earned All-MIAA A Conference honors.

He became a bonafide superstar his junior season. Smith averaged 17 points, nine rebounds and three blocked shots, leading the Irvington school to the MIAA A and BCL Tournament championship.

“I did a lot of things people said I couldn’t do,” said Smith, who was named Maryland Gatorade Player of the Year. “I tried my best thing to prove them wrong.”

“Every year, his role expanded and every year, he responded,” Clatchey said. “He is a player who can impact the game at both ends on almost every play. He’s not just athletic, but versatile. He improved as a shooting threat where he could hit the 3, put it on the floor, run the floor and also pass. He protects the rim and rebounds. He’s a great all-around player who helps his team win in a variety of ways.”

A lifelong University of Maryland fan, Smith signed with the Terps. Despite struggling at times with his slight frame in the physical Big 10 Conference, Smith averaged 11.7 points, 6.9 rebounds and 1.2 blocks as a freshman (selected to Big 10 All-Freshman Team) as the Terps reached the NCAA Tournament.

He blossomed his sophomore year, starting all 31 Terp matches, averaging 15.5 points and 10.5 rebounds. Smith was named first-team All-Big 10 and to several All-American teams. Maryland won a share of the Big 10 regular season championship and was slated for a NCAA Tournament berth before the COVID-19 pandemic cancelled the Big 10 and NCAA tournaments. 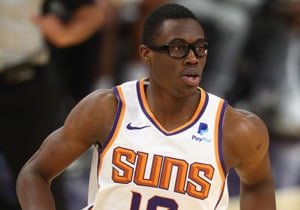 After being drafted 10th by the Phoenix Suns in November, Smith is averaging 1.3 points and one rebound in 15 games this season. He missed several games after contracting COVID-19.

After two seasons in College Park, Smith decided to take his talents to the NBA. The Phoenix Suns selected Smith with 10th overall pick.

Smith, 20, has had a rough first season, missing several games after contracting COVID-19 and a brief stint in the G League. He’s averaging 1.3 points and 4.4 minutes per game for the Suns, who’re second in the Western Conference.

“Mentally, I’m fine. It’s a process,” said Smith. “I still got to learn a lot of new stuff that was put in while I was out, but it’s a part of basketball. I feel fine. it’s just a matter of me getting my wind back. Just continuing to get back into the motion with the team.”