10 Years of Excellence: VSN’s No. 1 Baseball Infielder of the Decade 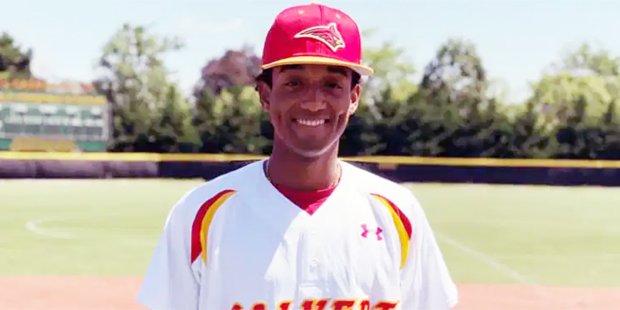 St. Louis Cardinals’ Hall of Fame shortstop Ozzie Smith was known as the “Wizard of MLB.” Former Calvert Hall shortstop, Jose Torres was the “Wizard of the MIAA” and is now flashing his talents at North Carolina State of the Atlantic Coast Conference (ACC).

Torres led Calvert Hall to the MIAA A Conference championship with his bat, arm and glove in 2019 and was the consensus VSN Baseball Player of the Year to cap a sensational four-year career as the Redbirds’ starting shortstop.

“It’s such an honor to be named the No. 1 infielder. I really appreciate that,” said Torres, taking a break from baseball and classes at NC State where he is majoring in sports management. He hopes he gets a chance to play professional baseball and make it all the way to the big show.

There are many reasons why Torres is the man on the VSN 10-Year Anniversary Team.

The bluechip shortstop closed his high school career with the Cardinals’ first A Conference crown since 2013 and the VSN Final No. 1 ranking, batting a torrid .402 and he became the first local player to post a trio of 40’s in the major categories of hits (43), runs scored (45) and RBIs (44).

Torres also had eight doubles, three triples and seven home runs, one of them a walk-off grand-slam that beat A Conference runner-up and VSN’s 5th ranked Gilman, 5-2. He he called it “one of my most thrilling moments, a feeling I will never forget.”

Tabbed in the 24th round of the MLB first year Free Agent Draft by the Milwaukee Brewers in 2019, Torres opted not to sign and accepted a baseball scholarship to D1 NC State in Raleigh, NC. He has gone onto national prominence starting his sophomore season in Raleigh this spring after batting .333 in the COVID 19-shortened 2020 campaign of just 17 games.

Torres was named one of just 55 players nationwide on the prestigious D1 Golden Spikes Award Watch List. The honor will go to the top D1 collegiate player in the country at season’s end.

For now Torres will savor his current VSN citation and press forward at one of the most iconic baseball programs in the nation, NC State founded in 1903. They started as the Farmers before becoming the Wolfpack in 1921 thanks to the unruly behavior of the football team that prompted fans to tag them as a “pack of wolves.”

Torres is a wolf with his sites on the big hunt.

“Playing pro ball is definitely my goal. I’m excited about being eligible for the draft (turned 21 in September, 2020 to become eligible as a sophomore at a 4-year school) but right now I’m concentrating on everyday and helping the team make the tournament (ACC).”

Born in the Dominican Republic in 2000, Torres started playing baseball in Miami and eventually moved to Parkville in Baltimore County and enrolled at Calvert Hall where he took his skill level to rich proportions. The wiry 6-foot, 170-pound Torres dazzled Cardinal parents, fans and opponents frequently with his excellent hands, range and body control and silky moves in the middle infield.

Torres made all the plays – routine and the unlikely to be made – completing them with his strong arm. The pro scouts have proclaimed that he appears as a D1 shortstop to be a rare collegiate player who will remain at the high level at his natural position as a shortstop.

His former Calvert Hall teammate, right-hander Peter Marchinek (9-1, 2.04 ERA), the VSN Pitcher of the Year in 2019, said of Torres, “I loved watching him play. He made plays nobody else could make.”

This reporter watched him play all four years at the Hall and marveled at many of the acrobatic and routine plays he made – in the hole, backhanding balls and planting his back foot then showing his rifle-like arm to gun down runners at first. He calmly fielding shots right at him and made plays look easy. He could also scoop slowly hit tappers near the pitcher’s mound and, in one motion, transfer the ball to his throwing arm and record the assist.

When the situation called for it, Torres would roam into the outfield, right or left side, and scarf up the relay and in split seconds deliver a strike to home plate to prevent attempted advances.

Simply put, Torres could do it all as a high school shortstop. And his flashy and silky smooth style exhibits the fun of the game of baseball.

“Jose was an amazing player, the kind that you wanted the ball hit to in crucial situations because you knew he would make the play,” said veteran Calvert Hall coach Lou Eckerl, the VSN Coach of the Year in 2019 who is closing in on 500 career wins at the Hall and Cardinal Gibbons and about a dozen victories from the Cardinals’ school record of 462 by Joe Binder.

Eckerl, who has been the Redbirds’ coach for two decades ranks Torres among the very best to ever play at The Hall.

In addition to his defensive brilliance, Torres can swing the bat with authority and is currently fitting in well in the Wolfpack lineup batting in the middle of the order, usually the fifth slot.

The lineup has followers predicting that NC State has one of the most potent lineups ever in the tenure of veteran coach Elliott Avent.

Avent is in his 25th season and is the school’s winningest baseball coach with over 900 wins, reaching the 900-plateau in early April of this year with a 13-2 rout of Appalachian. Torres said it was an “awesome day.”

The veteran coach became the all-time NC State career winner with his 514th victory back in 2010 with a 21-0 romp, ironically, over Towson State. He passed 21-year coach Sammy Esposito that day.

“I’m in a great program here at NC State under Coach Avent,” said Torres, who occasionally appears with his team on the ACC TV Network and did this past Saturday (April 24) night and Sunday.

“Calvert Hall and coach Lou (Eckerl) and his staff prepared me well for this level of play. I love playing here at NC State where we have one of the best playing surfaces in the country.”

Torres loves the diamond at Doak Field in Dail Park and you might say that he has been very fortunate to have played on Calvert Hall’s plush Carlo Crispino Stadium. The Cardinal’s home park was dedicated and named after Crispino, a 1948 Hall grad and former minor league player, back in 2008.

Crispino donated $1 million to the construction of the baseball stadium that is as good if not better than many college venues in Maryland. The Stadium gained national attention before Torres started at the Hall in 2016 which was the year his brother Dariel graduated as the Cardinals’ centerfielder.

Dariel Torres is now an agency recruiter and he visited NC State over the weekend along with Jose’s parents, mom Alexandria and dad, the first Jose Torres who played some baseball as pitcher-centerfielder in the Dominican Republic.

The family came down to see Jose and the Wolfpack play a big series this weekend with No. 15 ranked Virginia Tech. The Pack took the first game by 3-1 on Friday night lifting their ACC record to 10-12 and 17-13 overall.

“They’ve been down to see me a lot this season and that means a lot to me,” said Torres.