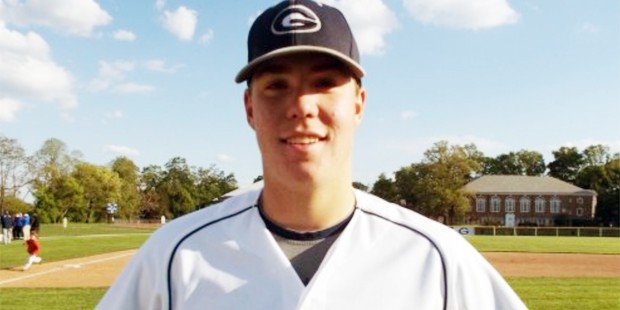 Gavin Sheets, a 2014 Gilman School graduate and son of former Baltimore Orioles’ outfielder/DH Larry Sheets reminds those who saw the latter play of his dad. Larry Sheets is the Greyhounds’ head baseball coach who came to the school as a teacher in 2010 and his 24 year old son is following in his footsteps. 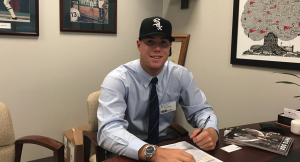 Thirty-nine years after his father signed for $22,500 as 29th overall picked in the 1978 MLB Draft, Gilman grad Gavin Sheets signed for $2 million as the 49th overall pick in the 2017 draft. He will start his 2021 season in AAA Charlotte in hopes of making his major league debut later this season.

Gavin Sheets is knocking on the door of major league baseball as a first baseman-DH-outfielder with the Chicago White Sox at AAA Charlotte on the 40-man roster after an outstanding high school career, playing four years for his dad, which has now earned him recognition as VSN’s No. 1 Baseball 1B/DH of the Decade. His high school career was followed by a productive three years at Wake Forest, resulting in his being selected in the 2nd Round of the 2017 MLB Free Agent Draft.

“Those who saw me play say that Gavin’s swing is a lot like mine with a bit of an uppercut. The launch angle is close.”

It’s likely that “uppercut” is natural from the left side, a la his dad, and comes from Gavin’s golf swing. The young man considered playing golf over baseball before becoming a teenager and his dad was willing to accept his choice of the links over the diamond.

“Gavin fought back and forth over golf and baseball,” said coach Sheets, who played eight years in the big leagues starting with the Orioles in 1984 and playing in Baltimore for six years through 1989 before finishing with the Tigers and Seattle Mariners . “I told him to go ahead and play golf if he wanted to. I would support him, but when he got to 14-15 years old, his baseball skills started to develop. I think over the long haul, he made the right choice.”

No doubt that Gavin did in fact make the right decision and it started to show in high school at Gilman. Gavin made varsity as a freshman after his dad was told by the other coaches “to get off his back” that first year.

“My coaches told me during tryouts that Gavin made the team and that made it easy from that point on,” said coach Sheets, who was the Orioles’ MVP in 1987 when he batted .316 with 31 home runs and 94 RBIs. “We had a great relationship, father and son and me as the coach.”

Gavin Sheets had the pleasure of playing high school baseball for his father, former Major League slugger Larry Sheets, who also helped his son navigate the journey into professional baseball and a potential MLB career.

Sheets the player got through his first season dealing with a few seniors who agitated him and other underclassmen a bit, but also pushed him. By his sophomore season he became the Greyhounds’ cleanup hitter, batting .347 with his first dinger and 27 RBI’s. The following spring, Sheets was a MSABC Preseason All-State selection and he delivered big time to support the honor batting a robust .425 with four home runs, a record 19 two-baggers and 34 RBIs.

Closing his high school career in 2014, Sheets repeated as a Preseason All-State player, Baltimore Sun All-Metro and All-MIAA A Conference, batting .400 with five homers and 36 RBI’s, finishing with 10 dingers and over 100 RBI’s in four years, plus 21 wins as a southpaw pitcher. Five of those wins came in his sophomore season, nine as a junior and seven his senior year with 102 K’s in 50 innings.

Sheets was drafted by the Atlanta Braves in the 37th round coming out of Gilman, but chose not to sign and instead headed to Wake Forest in Winston-Salem, North Carolina.

“Gavin threw 88 mph as a lefty and Tom (Walter, head coach) said he wanted him to play everyday as a position player,” Coach Sheets recalled. “Gavin loved every moment playing at Wake Forest for Tom. It was definitely the right place for him.”

Please, excuse Sheets for loving his 2017 junior season with the Demon Deacons. Named All-Atlantic Coast Conference, Sheets lit it up with a .317 batting clip featuring, 21 home runs and 84 RBI’s in just 63 games. A horde of scouts frequented Winston-Salem and other parks around the ACC to see that left-hand power hitting first baseman/OF of the Demon Deacons named Gavin Sheets.

Come draft time in June, the Chisox nabbed Sheets in the 2nd Round put the big bucks on the table, inked him to a pact and sent him to Kannapolis, N.C. Cannon Ballers to begin his professional career. By his third season, Sheets was in Birmingham playing for the Barons in the AA Southern League tearing it up.

Sheets became one of the most feared sluggers in the Southern circuit launching 16 bombs, 18 doubles, knocking in 83, crossing the dish 56 times and batting .267 in 126 games. Management perked up and after Covid ruined the 2020 season, the Pale Hose placed Sheets on the 40-man roster in November, 2020.

Spring training at the White Sox MLB level, brought Gavin Sheets and a new skipper by the name of Tony LaRussa. The 76-year old LaRussa has taken the reins of the Pale Hose much to the delight of Larry Sheets.

“Tony as you know is a Hall of Fame manager who brings a lot of knowledge to the game and gives somebody like me a ray of hope that I can coach a long time,” said the 61-year old coach Sheets. “Tony is a good fit for the White Sox and Gavin checks a lot of the boxes to get his opportunity to play for him.”

Sheets, who turns 25 on April 23, could get a shot at the big show some time after May. Charlotte opens its season on May 4. Major League baseball announced the AAA East seasons would not begin in April as originally scheduled due to Covid related circumstances.

“Gavin is on the doorstep of the big leagues, but will have to wait a month to begin play this spring,” said Coach Sheets. “But he will get the opportunity.”

The Sheets family and Greyhound faithful will love it when he does.