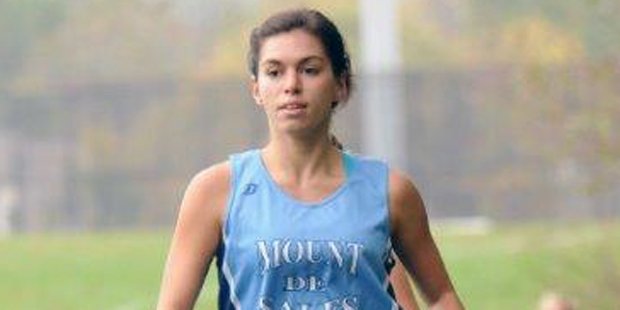 Jessica Harris started running as a freshman at Mount de Sales because she wanted to make friends and, she said, she couldn’t play any other fall sport. That decision would spark Harris to a career as an elite runner who would excel for more than a decade.

VSN’s Girls Track and Field No. 2 Middle Distance Runner of the Decade, Harris won 11 individual IAAM track championships in events ranging from 300 to 800 meters. As a senior finishing fourth at the New Balance Indoor National Championships, she ran the second fastest 800 meters by a Maryland high school girl at the time, 2:10.25, a mark that currently ranks third all time in the state.

“She was our first breakthrough athlete on the national level,” Sailors coach Steve Weber said. “She was a completely natural leader and she had a way of pulling the team along with her. She showed us what was involved to be able to continue to keep our program at that level and we’ve had a succession of runners, but she was our first and she showed us how to do it.” 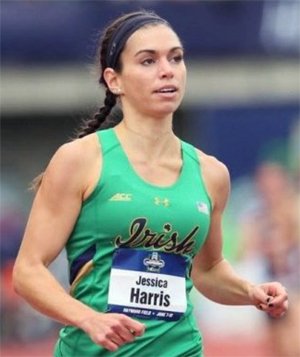 Jessica Harris continued to improve as a world class runner at the University of Notre Dame where she broke several middle distance records and earned All-American status.

Harris went on to become an All-American at Notre Dame and to qualify for the 2020 Olympic Trials in the 1,500-meter run. After her final season with the Irish, she ran professionally until December when she opted to stop racing before getting married in January.

As a high school runner, Harris was nearly unbeatable in the middle distance events. A five-time Baltimore Sun All-Metro selection, her best event was the 800 meters, which she won six times at the IAAM championships. She also won the 500 meters indoors as a sophomore, junior and senior and she won the 300 her final two years.

“Jess was phenomenal to watch,” Maryvale coach Jason Miller said. “She was gutsy, she had heart and she just wanted to win and run it out. She would get out and if someone was there, she would just sit on you and out-kick you at the end. She had a phenomenal kick. If you were 15-20 meters ahead, she was going to run you down.”

As a sophomore and junior, Harris finished fifth and seventh, respectively, at the New Balance Outdoor Nationals, but she counts her experience as a senior at the Indoor Nationals as the most memorable race of her high school career.

“Because it was very important to me when I was getting recruited, the New Balance indoor meet my senior year was really big,” Harris said. “That was the first time I competed against really good women. I was racing some of the best 800-meter women in the country, in high school of course, and I was so nervous beforehand… but coach Weber and coach (Gene) Williams talked me up and got me on the starting line and I did pretty well and that was where I actually spoke to my college coach for the first time, after that race.”

When Harris got to Notre Dame, she broke school records in the 600, 800 and 1,000 meters four times in the first four meets of her freshman indoor season. She also helped the distance medley relay qualify for the NCAA Indoor Track Championships that year.

Throughout her collegiate running career, Harris remained as consistent as she had at Mount de Sales.

“She never had a bad race,” Weber said. “She was just naturally gifted to begin with, but as she got older, she became quite serious about training and all aspects of training… A lot of girls skimp on drills or leave something out. She really worked on every aspect of it.”

Harris credits Weber and Williams with her ability to be so consistent at such a high level.

“In high school, there was not too much pressure put on us to perform at an elite level which I think is so important,” Harris said. “Coach Weber and coach Williams really emphasized this being a sport we do for the joy of running. Positive results on the track are just a bonus from that. I think what set me apart from my peers and why I was able to maintain that consistency at the university level was that they were in very, very elite condition from 15 years on. It’s a very rare person who can maintain that, being physically healthy and mentally healthy for that long.”

In the final race of her Notre Dame career as a graduate student, Harris finished third in the NCAA championships in the 1,500 meters in 4:11.96, just shy of her collegiate best 4:11.67 that qualified her for the Olympic Trials. She earned her second All-America honor of the year. A 21st-place finish at the NCAA Cross Country Championships also made her an All-American.

After college, she signed with Nike to run professionally. Her highest world ranking was 46th in the 1,500 meters. She wasn’t able to race much because COVID-19 shut down most events, but her best finish came in the 2019 USATF Outdoor Track and Field championships where she finished 13th in the 1,500 meters.

She had planned to compete at the Olympic Trials in 2020 and she continued to train in South Bend, but when COVID postponed the Olympics for a year, life got in the way. For Harris, now Jessica Grace, getting married in January and studying to be a nurse at Mount St. Joseph University in Cincinnati, became more important than the Olympics.