10 Years of Excellence: VSN’s Girls Track & Field No. 2 Hurdler of the Decade 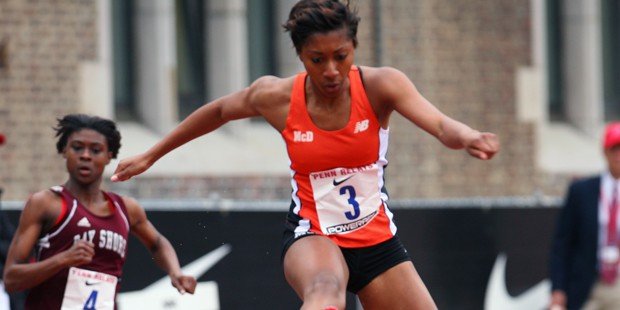 Autumne Franklin loves a challenge, so once she tried the hurdles as a middle schooler, she wanted to master them.

“I like new things, so, of course, I tried it and I loved it,” she said. “I guess it was the added challenge of the technicality of it. It’s not just running in a line. You’ve got to run really fast and figure out how to efficiently jump over something. I enjoyed that challenge. I thought it was fun.” 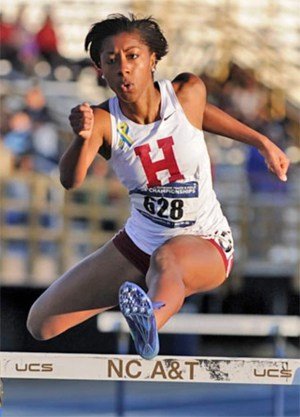 After winning four IAAM championships in the 300-meter hurdles and still holding the conference record, McDonogh’s Autumne Franklin took her talents to Harvard University where she won 10 Ivy League individual championships and was part of four relay titles.

She went on to run for Harvard and became a first-team All-American. In 2016, she finished sixth at the Olympic Trials in the 400 hurdles and she still holds the Ivy League record in that event.

During her four years at McDonogh, Franklin won 12 individual IAAM championships and also competed in the sprints and the long jump. She dominated the conference in the hurdles as a junior and senior and was a three-time Baltimore Sun All-Metro first-team selection.

Her junior year, she set the IAAM record in the 300 hurdles at the Draper Invitational with a time of 41.99 seconds. Only four Maryland high school girls have ever run faster.

Franklin recalls that race as one of the most memorable of her career for the battle with Kiah Seymour from Archbishop Carroll in Washington, D.C.

“I think we both PR’d at that race. I was super nervous, but we both pushed each other and ended up being a hair apart crossing the finish line. She won, but it was a super intense and full-of-adrenaline moment,” said Franklin, who forced Seymour to run the second-fastest time in the country that year to beat her.

Tonya McNeil, her hurdles coach at the Owings Mills Track Club, said Franklin was hesitant to try the hurdles at first, but she saw McNeil’s daughter Najatee winning in the event. Enticed to try, Franklin excelled quickly.

“Autumne was just a natural. I had never seen anything like that.” said McNeil, who competed in the hurdles at Coppin State. “It took me forever to learn the hurdles. She swore she never hurdled before and I’m like, ‘Couldn’t be,’ because she was so good, but she’s aggressive and she learns really fast. It helped that she has speed.”

In her freshman outdoor season at McDonogh, Franklin won the first of four gold medals in the 300 hurdles and was second in the 100 hurdles at the IAAM championship meet.

Alrick Munroe, who coached her at McDonogh, said she benefited from competing early in her career with Eagles teammate Kristen Brown, who still holds the IAAM record for the 100 hurdles.

He recalled Franklin at the Meade Stampede as a freshman where she finished sixth in the preliminaries of the 100 hurdles. She wasn’t happy not to be running in the finals with Brown.

“That’s how Autumne was,” Munroe said. “Her freshman year was very average, but she came back committed and dedicated to be better. She didn’t want to be just average. She welcomed the challenge. She always wanted to go above and beyond. That’s how she would get better.”

By her freshman year at Harvard, Franklin was the Ivy League champion in the 60-meter hurdles indoors. Outdoors, she won the Ivy League 100 hurdles and was second in the 400 hurdles.

In June 2013, she won the 400 hurdles at the USA Track and Field Junior National Championships. That qualified her for the Pan Am Junior Championships later that summer in Colombia, where she made it to the semifinals before an ankle injury forced her to withdraw.

At Harvard, Franklin won 10 Ivy League individual championships and contributed to four relay titles. She swept the 60-meter hurdles indoors and the 100 hurdles outdoors all four years and finished fourth in the NCAA Division I championships in the 400 hurdles her senior year.

Less than a month later, she competed at the Olympic Trials In Eugene, Oregon.

“It was the coolest meet I’ve ever been to,” Franklin said. “It was awesome being surrounded by Olympians, world champions, veterans in the sport. It’s like track and field Mecca, going to the U.S. Olympic Trials.”

She finished the finals in 54.65 seconds, her personal best time.

“I was pretty confident,” Franklin said.” I don’t remember feeling especially nervous or anything out of the ordinary. I’d had a good year. I PR’d multiple times. I brought my time down by two seconds that year. I was the most fit I’ve ever been. I felt pretty good and I ran pretty well.”

After the Olympic Trials, Franklin, 26, remained in Boston to train with Harvard hurdlers coach Kebba Tolbert, but trying to maintain a professional running career while working full time proved difficult.

“People talk about the change from high school to college, but nobody prepares you for the shift from being in college to running professionally as a young adult… It’s hard to work full time, split your focus, navigate taking care of yourself in a different way — cooking, not eating dorm food that was prepared for you… It was just a lot of change,” said Franklin, adding that she began to feel stressed and didn’t feel like going to practice, so she decided to end her running career in the summer of 2018.

Franklin remained in Boston where she is happy working in marketing and being a freelance graphic designer. Instead of running, she now opts for yoga and stationary biking while enjoying many great memories of track.

“It was absolutely fun,” she said. “I feel like my track career at McDonogh was just a springboard for everything that came after with me going to Harvard, getting that education and having a good career at Harvard and then getting to the Olympic Trials.”

Pictured above: Autumne Franklin competing in the 400-meter hurdles at the Penn Relays, where she placed third, during her senior year at McDonogh (Photo courtesy of John Roemer).