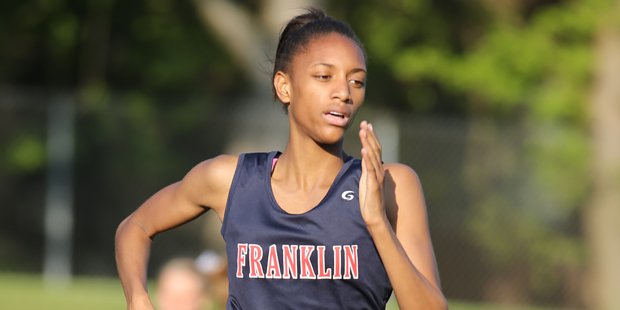 When she was little, Nyjari McNeil had to tag along to her big sister’s track practices, but she showed no interest in racing — until she realized she could win medals.

VSN’s No. 1 Girls Track & Field Middle Distance Runner of the Decade finished her Franklin career with 15 state titles, multiple All-America honors and the state record in the outdoor 800 meters. She won four state titles in the 500 meters indoors and her meet record of 1:13.30 still stands. 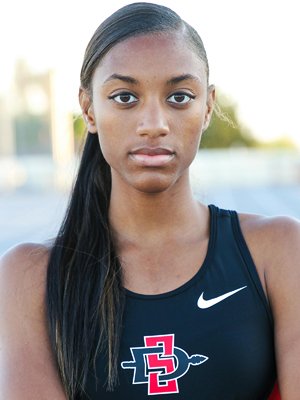 McNeil, the Gatorade Maryland Girls Track and Field Athlete of the Year as a junior, excelled at distances from 400 to 800 meters, winning 13 individual gold medals at the state championships.

She finished her junior year by breaking the state record in the outdoor 800 meters at the Hoka One One John Hay Memorial Distance Festival in West Chester, Pa. Her time of 2:07.34 bettered the previous record by more than four seconds. It stood until this spring.

“I’m still proud of that one,” said McNeil, who now runs for San Diego State. “I think the individual records are kind of benchmarks toward my bigger goal. I still want to make the Olympics and each of those records just kind of shows me I’m getting closer to my goal.”

At the Class 3A state championships, McNeil was unbeatable for three years.

In addition to sweeping the 500 meters indoors, she won the 800 meters indoors and outdoors and the 400 meters outdoors from her sophomore year through her senior year. She also won the 600 meters three straight times and broke the meet record at the Bishop Loughlin Games in New York.

Franklin coach Paul Hannsen said he was always impressed with McNeil’s consistency and focus as well as her work ethic.

“In high school, if you’re better than everybody else, you’re going to win a lot of things and get a lot of awards and so forth, but it is hard to do over eight seasons,” he said. “Nyjari just always toed the line. She was able to perform every time which is unusual even for an elite athlete.”

The Sun also named McNeil its Female Athlete of the Year for 2017-18.

McNeil was a national champion before she got to high school, winning USA Track and Field Indoor National championships in the 400 and 800 meters in 2014. She won 11 AAU Junior Olympic medals during her career.

Her first coach, Foster Lampkin with the Pikesville Cheetahs Track Club, told The Sun in 2018 that there was never any doubt about her talent.

“I saw from the beginning, she’s going to be a champion,” he said. “I told her parents the first day I trained her. I saw the potential. It was her turnover speed, her form and technique. She could beat most of our sprinters, and she was a middle-distance runner, a distance runner with speed.”

At Franklin, McNeil also anchored two indoor state champion 4×400-meter relays. In 2018, she joined Tylar Colbert, Cameron Hinton and Jasmine Johnson to finish in 3:52.15, a time that still stands as the state meet record. They lowered that time to 3:40.48 at the New Balance Nationals, the second fastest time ever by a Maryland high school team.

The foursome also finished sixth that spring in the Championships of America 4×400 at the Penn Relays with the third best finish among teams from the United States.

“The 4×4 her junior year in the indoor was epic,” he said. “We were maybe 20 meters down when she got the baton and even halfway through the race we were like 15 meters behind… She was gaining on the back stretch on the second lap and coming around, she caught the girl … and she just beat her at the line. It was like the most exciting thing that can happen in track.”

To pick a favorite moment from her high school career might seem a daunting task for McNeil, but she points to Franklin’s indoor team titles her freshman, junior and senior years.

“Winning the team state championship was always a really good feeling for me, because I knew that I contributed the most that I could and it felt good to win as a whole team. It felt better than the personal wins, because we all worked so hard for it,” she said.

At San Diego State, McNeil has already been part of three school records.

During the 2019-20 indoor season, she broke the Aztecs’ record in the 800 meters and also ran on two school record-setting relays, the 4×400 and the distance medley relay. She earned All-America honors as part of the 4×400 relay team that won the Mountain West Indoor Championship and qualified for the NCAA Championships before COVID-19 cancelled the meet.

Two weeks ago, she helped the Aztecs win the team title at the Mountain West Outdoor Championships. She came from behind to win the 800 meters and also anchored the 4×400 relay team to victory. At the NCAA West Preliminary Championships on May 29, the relay team just missed qualifying for the NCAA Championships.

Because of COVID-19, McNeil, 21, spent March through August training at home with long runs and weight lifting, but she also took time to rest.

“It was good to have that break,” said McNeil, who returned to racing in a February dual meet against Utah where she won the 400 meters and ran on the winning 4×400 relay.

“It felt really good to race again,” she said. “I was excited for the competition. Of course, it was a small meet, but it was the first time we had competition in a year and it felt good to kind of get back into that environment and the competitive mindset and see how our training was going.”

The Aztecs didn’t race much this spring and McNeil is eager to return to a full season of training and competition. She is also leaning toward taking the fifth year of eligibility offered by the NCAA to compensate for seasons lost to COVID-19.

She plans to run professionally after college and she said staying with the Aztec program for an extra year would make training for her ultimate goal of running at the Olympics that much easier.