10 Years of Excellence: VSN’s Girls Track & Field No. 1 Distance Runner of the Decade 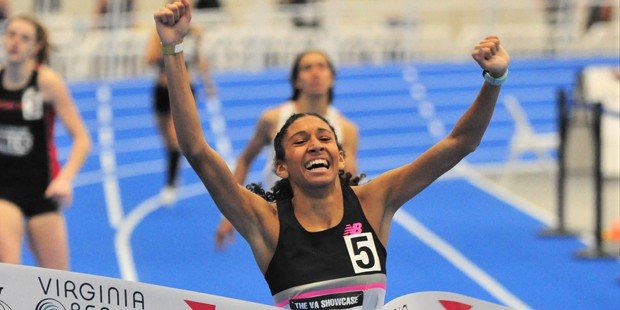 Early in her track career at Mount de Sales, Juliette Whittaker thought it would be “cool” to run in the Olympics, but she said she didn’t have much faith that she could actually qualify.

After she ran the 800 meters in 2 minutes, 3.1 seconds in February 2020, she began to reconsider her chances. That time was just off the Olympic Trials qualifying time of 2:02.50.

In January, she made it.

VSN’s Girls Track and Field No. 1 Distance Runner of the Decade qualified for the Olympic Trials by running the third fastest indoor 800 meters ever by a high school girl in the United States, 2:02.07, at The VA Showcase in Virginia Beach. 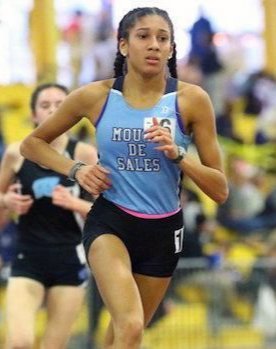 Not even yet a high school senior, Mount de Sales’ Juliette Whittaker has qualified for the U.S. Olympic Trials while smashing local and national records on a regular basis.

“When I went to Virginia Beach to race, I was trying not to think about it too much and put too much pressure on me, thinking like, ‘I have to make it.’ It was my first race back (after COVID-19 cancellations) and I was just trying to ease into it, but when I crossed the line and I saw my time, I was in so much shock and I was so happy,” said Whittaker, who has just finished her junior year at Mount de Sales.

While Whittaker continues to break her own state records in the 800 meters, she also holds six other state records from 1,000 meters to 5K. She first broke seven of them as a freshman or sophomore.

”My athletes idolize Juliette and what she’s doing,” Maryvale coach Jason Miller said. “We went up to a meet in New York for indoor a couple years ago and people were in awe watching her and I was like, ‘Yup, she’s from our conference and we get to see this all the time,’ and so for us, we don’t want to take it for granted, because what she’s doing for the sport and for this conference is just phenomenal.”

In just three seasons of IAAM track — two indoor and one outdoor — Whittaker won six individual conference championships and helped the Sailors repeat as outdoor team champions her freshman year. In that meet, the last IAAM track finals before COVID struck, Whittaker won the 800, 1,600 and 3,200 meters. She won the 800 meters in all three championship meets.

That Baltimore Sun named her to its All-Metro first team all three seasons and in the spring of her freshman year, she was The Sun’s All-Metro Track and Field Athlete of the Year.

Her sophomore year, she won the one-mile run and the 1,500 meters at the Hispanic Games and finished second in both at the Millrose Games, both in New York City.

Whittaker has had spectacular success for a 17-year old, but Mount de Sales coach Steve Weber said she still has great potential to be even better. She didn’t start racing until her freshman year and, Weber said, she’s being coached for a long career.

“It’s been my goal, and (her father) Paul Whittaker’s too, that Juliette progress each year but with the idea that she’ll have a college running career and a post-collegiate career as well, so we don’t want to get everything now,” Weber said. “We want things to occur gradually. We want to hold back and that’s hard because everybody wants everything right away and we’re willing to say, ‘Let’s watch her progress and increase the work each year and let’s be reasonable.’ Juliette has the discipline and understanding and to know that … she doesn’t have to reach the moon on her first attempt.”

Paul Whittaker said he believes “the sky’s the limit” for his youngest child not only because she’s talented and dedicated to training but also because of her innate ability to understand how to race. It’s the same thing, he said, that he saw in three of his track teammates at Georgetown who ran at the Olympics.

“She’s got instinct. We talk a little bit about race plans, but not much. We pretty much just tell her, ‘Use your instinct and do what you think you need to do,’ and when she qualified for the trials I barely spoke to her about the race and I did that on purpose because she hates talking before big races. She knows what she wants to do and I think she just gets focused.

“I said, ‘These girls are going to want to go out hard on you… Just sit on them at least through 400 and then use your strength.’ And what does she do? At about 250, she takes the lead and then she took charge. She dared them to go with her and that’s instinct. That’s how it felt right to her and she’s figured it out and she’s done it in so many races, so many big meets,” Paul Whittaker said.

But Whittaker’s future lies on the track where Weber said her best event may eventually be the mile. She holds the state indoor record of 4:43.89. In April, she ran the 1,500 meters in 4:19.79, the state record and the fastest time in the country this spring by a high school girl.

Whittaker agrees with Weber, but for now, she is focused on running the 800 meters in the first round of the Olympic Trials in Eugene, Oregon on June 24.

“I’m just excited for the experience I’m going to get from it, just racing such high-calibre athletes and all these professionals and really not putting much pressure on me. I really have nothing to lose. I’m at the Olympic Trials. How much better can this get? I feel like just using it as an opportunity to learn how to race in this big competition. A goal of mine would definitely be to get out of the first round. That would be amazing.”

Pictured above: Mount de Sales’ Juliette Whittaker crosses the finish line in the 800-meter run at January’s Virginia Showcase in 2 minutes and 2.07 seconds to qualify for the Olympic Trials. It was the third fastest indoor 800 meters ever run by a high school girl in the United States. (Photo courtesy of Phil Bond.)

Editor’s Note: High school statistics and records according to MileSplit.com.