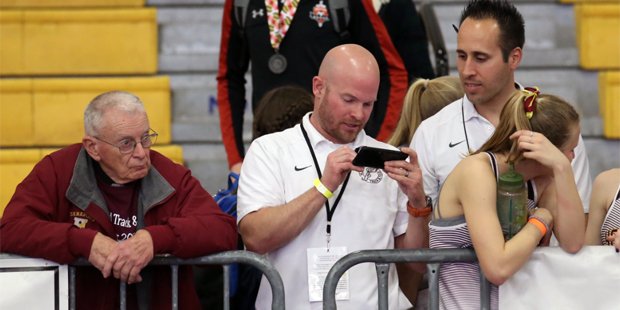 When Brad Duvall returned to his alma mater 13 years ago, coaching indoor track was an easy choice. As a student at Hereford, he enjoyed running middle distance events and as a physics teacher, he knows equations.

“I really appreciate the strategy behind both the training principles and the meet setups,” Duvall said. “I really like strategically planning out meets to try and accentuate our strengths and also to take advantage of the teams we’re competing against’s weaknesses and try to put kids in positions that allow us to maximize our ability, so there’s a mathematical strategy to it. It’s not necessarily, ‘This is this kid’s best event — let’s do it.’ Sometimes a lot more thought that goes into it.”

VSN’s Girls Track & Field Coach of the Decade, Duvall added outdoor track to his coaching duties 12 years ago and has guided the Bulls to eight state championships — six indoors and two outdoors. They won half of those titles in Class 3A and half in Class 2A.

In a rare feat, he guided the Bulls girls to four straight state championships — indoors and outdoors in 2019, indoors in 2020 and outdoors in 2021. It might have been six had COVID-19 not canceled two seasons. The juniors on this year’s team have won a state title every season.

“He’s so focussed on every aspect of what’s going on with the team,” Hittner said. “He wants to know what’s going on with all different athletes and all different event groups. He wants to give everyone a chance to run in a variety of different events and find out where they’re best. He’s paying attention to what other teams are doing in races, how their athletes are performing and what events are maybe softer to find some points at a county or a state meet — who can we put there and how do we maximize points?… It’s a lot of if-this-then-that sort of stuff.”

Even though the Bulls had never won a girls track championship before he took over, Duvall is quick to spread the credit around. He gives a lot of it to Hittner and assistant coaches past and present, including Sam Bowen, Weston Fellows, Dave Schreiner and Amanda Sanacore.

“It’s not just me by any stretch,” Duvall said. “It’s us as a coaching staff being realistic about what we can do well and making sure we do those things well. We can’t worry about the things other teams do. We can only control our own variables. That and just having really, really, really good kids. We have kids that work really hard.”

Among his top athletes, high jumper Alex Butz went on to finish second in the Patriot League championship three times for Bucknell and Elizabeth Shriver, who won the 2021 Class 3A state pole vault championship, has committed to Alabama.

Eight of Duvall’s athletes were named Baltimore Sun first-team All-Metro athletes during the decade, including Butz and Shriver, but the Bulls were never loaded with record-setting athletes. However, they always have a large team, usually about 70 girls, which gives Duvall many options for how to place his runners in the best positions to score points in the state championship meet.

His athletes are always driven — sometimes a little too driven.

Earlier this month when a practice was canceled because of thunder rumbling in the area, Duval said, a half dozen girls wanted to work out on their own on the Hereford track, which is a hilltop lightning rod.

“I was like, ‘You guys have got to go home. You can’t be up here.’ I kind of yelled at them and I don’t generally raise my voice at the kids because they listen. Then I look at Adam and I said, ‘You know, it’s frustrating I had to yell at them to go home, but it also explains a lot about why they’re really good.’ It’s kind of funny when you have to yell at kids to stop working out, to go home, but that’s the secret. It’s an indoctrinated chemistry of our team. They know what to expect. They know how to win and they know the expectation is to win at clutch time. They’re the real reason we win.”

Rising senior Piper Lentz would argue with that to some degree.

“I would not be where I am as an athlete today if it wasn’t for him,” said Lentz, who finished fourth in the 800 meters, sixth in the 1,600 and helped the Bulls’ 4×400-meter relay team win gold at the Class 3A state championships June 19.
“He’s pushed me to be the best I can be with all the thought and effort he puts into making workouts and he spends so much time. Every week, he creates a different elaborate workout schedule, including anything from 200-meter intervals to long tempo runs on the trails to varying unpleasant combinations of 1,000s, 800s and 500s that our whole team hates, but it’s so good for us… He works so hard to make us better and I appreciate that.”

Duvall also coaches Hereford’s girls soccer team and a 13-14 club baseball team and he finds time to spend with his 1- and 3-year-old daughters and wife Caitlin, the Bulls field hockey coach. He has become somewhat of an expert on time management and said not one minute of his day is wasted.

Next year, Duvall will give up his outdoor track team to take over the Bulls baseball team, but he loves track too much to stop coaching it altogether. He will continue to coach the indoor team.

“I absolutely love watching kids get out what they put in,” Duvall said. “It’s a life lesson that I think goes well beyond anything we do in athletics… I had a girl this year who ran 3:30 or 3:40 in her first (800-meter) time trial. She’s a freshman. She’s never run before in the 800. It was bad. It was slow. But by the end of the year, she was running like 3:06, 3:07 which is still not a great time, so she’s not a kid who’s going to states, but she was so proud and I was so proud of the growth. She dropped 30 seconds in a two-lap race over the course of eight weeks of training. That’s what I enjoy about it so much. I enjoy watching individuals get better because they work hard and realizing that hard work will pay off. I think that travels with them through life and it’s not just over when their track careers are over.”