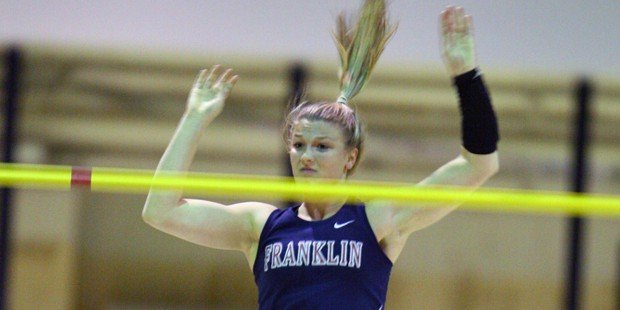 Olivia Gruver loved being a competitive gymnast, but by the time she got to high school, she was ready for something new and found her niche in the pole vault.

“I was a gymnast for most of my life, and I kind of got too tall and I kept getting hurt, so once I got into high school I just switched,” said Gruver, 5-feet-9. “My friend Naomi Roth’s brother Zach actually worked at a pole vault club and he was like, ‘You kind of look like you’d be a good pole vaulter with your background in gymnastics,’ so I tried it out one weekend and I never stopped going.”

Now, Gruver, 23, is one of the top pole vaulters in the country.

Olivia Gruver began her college career at the University of Kentucky where she won two NCAA outdoor championships in the pole vault.

VSN’s Co-No. 1 Girls Track Field Athlete of the Decade holds the state high school indoor pole vault record of 13-feet, 4.5-inches and the NCAA outdoor record of 15-feet, 6.25-inches. A three-time state champion and two-time NCAA champion, she’s aiming for the Tokyo Olympics in July and will compete at the U.S. Olympic Trials a month from now.

“It just kind of clicked for me,” she said of her transition to the pole vault. “Being a gymnast, you have a very good sense of body awareness, so being able to throw myself into the air and be confident about it just made me feel good.”

At Franklin, she excelled quickly.

“She just had a kinesthetic sense [meaning] you just know how to move your body,” Franklin coach Paul Hannsen said. “It doesn’t necessarily mean you’ll be better — in her case she was better — but you can just tell them to move your arm in this way and they immediately know how to do that. In other people, you have to go over it 20 times and then they get it, but she could pick those things up right away.”

Hannsen said Gruver needed a year to learn the sport, but that didn’t stop her from vaulting higher and higher along the way. During her freshman indoor season, he saw her potential in a single meet.

“She was jumping like 7-feet-ish, 7 to 7-6 at that point, and then she cleared eight feet. Then she cleared nine feet or something like that…,” Hannsen said, “and she still didn’t know what she was doing, but she was muscling over, improving while we were watching basically.”

Gruver continued to hone her skills at DC Vault, the area’s top pole vault club, and as a senior, she won her second straight Class 3A state indoor championship with a vault of 13-feet, 4-inches, which is still the meet record. That height along with her vault of 13-feet as a junior remain two of the top three vaults in state meet history. In 2014-15, The Baltimore Sun named her Girls Indoor Track Athlete of the Year.

As a junior, she won the state indoor title, vaulting 12-feet. That season, she went on to finish third and set the state record at the New Balance Indoor Nationals. Then she finished first at the USATF National Youth Indoor Track and Field Championships.

During her junior outdoor season, she won at the Penn Relays.

“Olivia was by far the best athlete I’ve seen pole vault, pure athlete as far as speed, strength and ability height, the works. She was phenomenal in high school,” said Jason Gross, assistant track coach at McDonogh, who spent a year as an assistant at Franklin during Gruver’s career.

While Gruver counts her state titles and her state record among her favorite high school moments, the 2015 indoor season stands out for another reason.

“Indoor states my senior year, I won (pole vault) and then the women’s team won states and I just remember sharing that with my teammates and it was just amazing,” said Gruver, who also competed in the high jump and long jump at Franklin.

In college, Gruver had even more success, winning two NCAA outdoor championships at Kentucky before completing her final two seasons at Washington, where the COVID-19 shutdown prevented her from going for a third straight outdoor title.

Gruver competed just four times and was the top seed for the 2019-20 NCAA Indoor Championships before COVID-19 forced their cancellation. Before the shutdown, she won the bronze medal at the USA Track & Field Indoor championships, clearing 15-feet, 5-inches, a new school record indoors and the second best in NCAA indoor history.

At Kentucky, where she broke the school record as a freshman, she won the 2017 and 2018 NCAA outdoor championships, becoming just the second woman to win consecutive titles.

After the 2018 season, she followed her coach, Toby Stevenson, to the West Coast.

In her first season with the Huskies in spring 2019, Gruver broke the NCAA outdoor record at the Stanford Invitational. She broke the old NCAA record by a centimeter, but it bettered the Pac-12 record by five inches and the Huskies’ record by a foot.

Despite a strained hamstring, she finished third in the NCAA championships and went on to finish fourth in the 2019 Pan Am Games in Lima, Peru. She was also the top collegiate finisher at the 2019 USATF Outdoor Championships.

Gruver said the COVID-19 shutdown hindered her progress, because it was a while before she could find a place to vault. Still, she took a month and a half off to heal from a few foot and hamstring issues that nagged her during her college career and now, she said, “I feel stronger than ever.”

Excellent timing, of course, with the Olympic Trials for pole vault beginning June 24. Gruver’s Olympic dream started quite a while ago.

“Ever since I was young, I knew I wanted to go to the Olympics. When I was younger, it was gymnastics and then once I stopped that, I was just kind of lost trying to find a new sport. Once I found pole vault, it clicked with me and I was confident and once I got to college, I think it truly set in that I could do this. Once I won my first national championship, I was like, ‘I’m going to put all my effort into this and I can make it to the Olympics.”

Pictured above: Olivia Gruver broke scores of records and won several pole vault titles at Franklin High School, while still in the process of learning the sport. She continued to set records and win championships in college, at both Kentucky and Washington, and now she has her sights set on making the U.S. Olympic Team. (Photo courtesy of John Roemer)