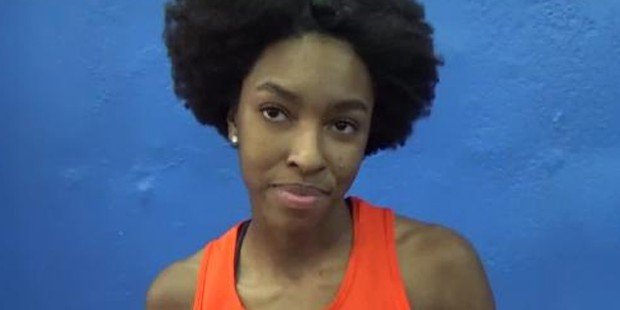 In middle school, Jada Seaman joined McDonogh’s track and field team as “a joke.” Bored with basketball, she said she just wanted to be involved in a sport.

VSN’s Girls Track and Field Co-No. 1 Field Athlete of the Decade holds state records for the long jump indoors (20-feet, 5-inches) and outdoors (21-feet, 2.75-inches), both set at New Balance national meets her senior year. Her outdoor jump ranked No. 1 in the country in 2019 and her indoor jump was third. 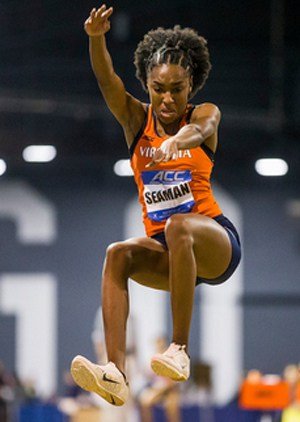 Proving her high school success was no fluke, Jada Seaman became ACC Indoor Track Freshman of the Year in 2019-2020 at the University of Virginia, breaking the school’s long jump record, winning the ACC championship and earning 1st-Team All-American status.

Initially, she said, she wasn’t sure about the long jump.

“In the first few meets that I did it, it took me a while to get the rhythm down and I still didn’t really have it. I just ran and jumped. I didn’t look that great. It didn’t look that pretty, but I got a few good ones in and after that I was, ‘Okay. Cool. This could work out,’” she said.

One of the secrets to her long jump success is that she’s also one of the state’s all-time best sprinters. Seaman ran for 11 IAAM championships in distances from 55 meters to 300 meters, giving her 16 total individual medals for her career.

When she started running, Seaman focused on sprinting.

“It was kind of hard. I wasn’t used to running all the time, but I eventually started to enjoy it once I started winning stuff,” Seaman said with a laugh. “I remember me and my friend, they put us up against the boys in an eighth-grade race and I won that, so it was a fun time.”

She started winning pretty quickly when she started jumping too.

“She tried long jump and she excelled immediately. She jumped 19 feet in her first season jumping,” said her Eagles head coach Devin Robinson. “The reason we put her in (long jump) was because she has so much speed and with long jump, all you need is speed and to be able to hit that mark and you’ll go far, so we decided to train her and have her work with the jump coach and she ended up loving it. I think that’s why she’s really good at it.”

Jason Gross, the assistant coach at McDonogh who worked with jumpers, said her speed was critical, but he noticed something else about Seaman.

“Speed is definitely a big deal,” Gross said, “but I kind of watch people’s natural ability to lift off the ground while they’re warming up and doing drills, so I thought it might be something she would be good at. Part of my push for Jada specifically was because at the high school level, the long jumpers that are thrown your way tend to be lesser athletes that aren’t quite good enough to be on the track, so I made a push for more athletic kids to come do long jump and it worked itself out.”

As a sophomore, Seaman won the IAAM indoor championship with a jump of 16-feet 8.75-inches and then won the outdoor title with a jump of 19-feet, 1.75-invhes. In her first appearance at a national meet, she finished 20th at the New Balance Outdoor Nationals, jumping 18-feet 2.25-inches.

“From basketball, I knew I had speed, so I just went with that,” Seaman said. “Down the runway I need to go fast to get a good jump, so the main part of my approach I focus on speed so I can jump far. My form isn’t great, but speed kind of makes up for that.”

A five-time Baltimore Sun All-Metro selection, Seaman was named The Sun’s Girls Track Athlete of the Year outdoors as a junior and indoors as a senior. She was a four-time high school All-American.

After repeating as ACC champion this winter, she finished 12th at the NCAA Indoor Championships in March, making her a second-team All-American.

In her first outdoor season, Seaman qualified for the NCAA championships June 9-12 in Eugene, Oregon by finishing 12th at the NCAA East Preliminary round Thursday. She not only won the ACC long jump championship, but she also ran a personal best time of 23.22 seconds to finish fourth in the 200-meter dash at the title meet.

“Her potential, honestly, it’s as far as she’s willing to take it,” Gross said. “At some point, it’s just a matter of work ethic and how bad do you want it, but I would say she’s on course to go to the next level as long as she wants to. I look forward to seeing what she’s able to do with another full year of training without COVID hindrance.”

While Seaman has had the most success as a long jumper, she said she still enjoys running too.

“I like them both equal. I think long jump is more fun. You’re just flying for a few seconds. I can’t long jump without running, so it’s a symbiotic relationship.”