10 Years of Excellence: VSN’s Girls Tennis Player of the Decade 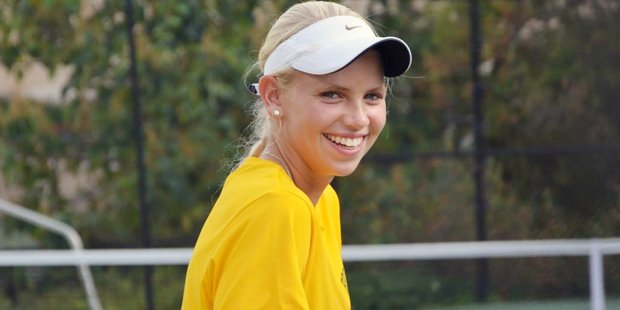 By leading Bryn Mawr to its first Interscholastic Athletic Association of Maryland A Conference team championship in four years as a freshman in the fall of 2013, Cameron Corse was only laying the groundwork for better things ahead.

Corse, VSN’s Girls Tennis Player of the Decade, would eventually win four No. 1 singles titles and go undefeated in the A Conference while helping the Mawrtians capture three team crowns. 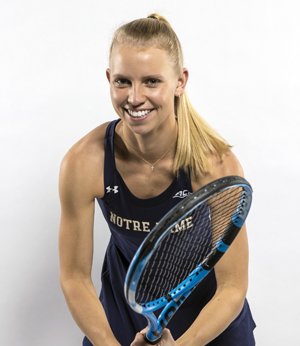 After Bryn Mawr, Cameron Corse went on to standout as a student and athlete on the tennis team at the University of Notre Dame. She was a two-time All-ACC performer for the Irish while capturing several prestigious academic and leadership awards at the university.

Bryn Mawr had a sparkling 36-1 record in team matches during her brilliant career.

In addition, Corse only lost three games in her four-year reign in A Conference No. 1 singles finals, a testament to her dominance during that period and a major reason why she was recruited to play the sport at Notre Dame.

Her aggressive style juxtaposed with a calming demeanor on the court were part and parcel of what made her a champion.

“I would describe my playing style as more of an all-court game,” Corse said. “I enjoy coming to the net — which is not as common among female tennis players.”

Kate Brendler, who shares VSN’s Girls Tennis Co-Coach of the Decade honors with fellow Mawrtians coach Tilly Taborda-Almaguer, said that Corse’s even-tempered nature was a key to her success.

“She always kept her emotions in check and did what she needed to do,” Brendler said.

Despite hardly being challenged in high school, Corse said that her experiences playing for Bryn Mawr were extremely worthwhile regarding both athletics and academics.

“I fell in love with the team environment and would miss my teammates when training individually during summers,” she said. “Having a shared mission with a group created a second family and enabled us to reach higher heights than we could have on our own, all while making fun memories along the way.

“Playing high school tennis introduced me to a great network of friends and coaches in addition to preparing me for the demands of the student-athlete lifestyle. The most valuable lesson I learned from playing tennis in high school was how to be disciplined with my time. The academic transition to high school was challenging and stressful. Over my four years at Bryn Mawr, I learned to focus on the task at hand.”

She used that ability to concentrate to great effect.

“When I am studying for an exam, I focus on the material in front of me,” Corse added. “When I am on the tennis court, I focus on improving my game because that is all one has control over in that moment. Learning this lesson early helped me have a smooth transition to the collegiate student-athlete schedule and ultimately to graduate Notre Dame with Honors.”

No wonder she was so coveted by the Fighting Irish, considering that the Tennis Recruiting Network had Corse ranked as the 14th-rated recruit in the nation, No. 1 in Maryland, and 19th in the U.S. in the 18U bracket after she racked up an impressive 11-0 mark against rivals rated as 4-or-5-star recruits during her senior year at Bryn Mawr.

Her career at Notre Dame proved that she was more than ready for the big-time tennis played in the Atlantic Coast Conference by being a two-time All-ACC selection and a senior co-captain while joining Page Freeman on the nation’s 12th-best doubles tandem.

According to Corse, the foundation she received at Bryn Mawr was instrumental to her doubles’ success at Notre Dame.

“I attribute a lot of my doubles’ development to my time playing for Bryn Mawr,” Corse said. “During high school matches, my coaches (Taborda and Brendler) encouraged me to work on my serving and volleying. At the time, I thought the challenge was fun. However, looking back, I realize how valuable the repetitions I received in high school were in order to prepare me to take my doubles game to the next level in college.”

Corse also earned Intercollegiate Tennis Association National DI Player of the Week honors among a bevy of other tributes she received in South Bend, most notably by winning the 2021 Byron V. Kanaley Award, Notre Dame’s most prestigious award for student-athletes.

The Kanaley Award is chosen by the university’s Faculty Board on Athletics and given to senior monogram athletes who have been most exemplary as both students and leaders.

She also earned the 2019 Knute Rockne Scholar-Athlete Award, given to one student-athlete on each team annually and was a four-time Scholar-Athlete for having a 3.5 or greater GPA for an academic year.