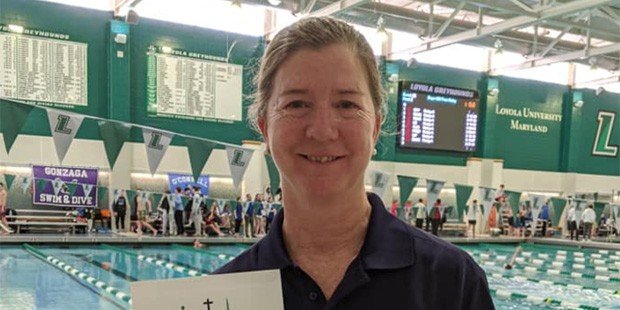 Terri Byrd, NDP’s coach since 2006, then found a way to stop the Eagles’ juggernaut by using the Blazers’ depth to take four out of the next five banners during the past decade.

It wasn’t easy to do and even more difficult to maintain that high standard against such a quality opponent, yet VSN’s Girls Swimming Coach of the Decade showed that she is more than up to the task.

Although her teams have not won a championship meet since 2015, they’ve been runners-up every year — a feat that not even McDonogh can claim.

Every year, it’s almost a foregone conclusion that the championship meet will be a showdown between the long-time rivals.

Terri Byrd poses with her team following their victory at the National Catholic Swimming and Diving Championships, at Loyola University in Maryland, in January of 2020.

Even the dual meets between the teams are usually high-spirited events with good sportsmanship prevailing regardless of the outcome — something both coaches value.

Byrd refused to gloat after the most recent triumph, preferring instead to register how pleased she was with her team’s effort rather than pointing out the Eagles’ shortcomings that day.

“I didn’t know if we could maintain that (level),” Byrd said after the meet. “I thought we were at the top of our game against Bryn Mawr (a 108-62 win a week earlier). But then the girls gave me even more.”

In her usual low-key style, Byrd was hesitant to believe the Blazers had pulled off the victory despite being informed that a positive result was assured before the final event, the 400-yard freestyle relay.

“I still wasn’t convinced (before the 400 free relay),” Byrd said. “I just wanted the girls to keep their heads down and keep going. I am truly amazed at what they could do.”

Considering that her NDP squads have posted a league-best 63-5-1 record in the decade with four conference championships and a 5-5 mark against McDonogh, Byrd is highly regarded for her ability to get her teams to consistently compete at a high level.

“NDP is always well prepared,” McDonogh coach Scott Ward said. “Her teams are clearly ready to swim, and they have such a tremendous spirit. That’s what makes high school swimming so much fun. She’s someone who connects with her kids — and her kids really respond to her.”

Getting her top swimmers to buy into the team concept is another Byrd hallmark.

When VSN’s No. 3 Girls Swimmer of the Decade Kendall Krumenacker was a sophomore, the coach exhorted her to take on even more responsibility as a budding star.

“I was being stubborn, and Miss Byrd sat me down one day and told me I could do more (for the team),” Krumenacker recalled, noting that the moment was pivotal in her high school career.

A former North Baltimore Aquatic Club and Towson University backstroker and middle distance swimmer, whose father, Bill Walker, was a water polo and swimming coach at McDonogh, Byrd was brought up in the sport and was heavily influenced by her dad’s coaching style.

He actually “volunteered” his daughter to coach at Catholic High, a position Byrd said that she held for nearly a decade.

The jump to the A Conference was perfect for Byrd, who still had time to raise three sons with her husband while being a high school coach at the highest level in the area.

And while the Blazers benefit from having some top club swimmers, the fact that NDP does not have its own club team can make Byrd’s job a little more complicated, albeit something she relishes.

“My place in the world is to have all these girls from different club teams and mold them into one unit — one cohesive unit,” she said. “I want them to come together for the greater good.”

Byrd added that she avoids getting in between her swimmers and their club coaches.

“The girls are being developed by their club coaches,” she said. “So I have great respect for those coaches. I wouldn’t step in unless I thought a swimmer was being harmed.”

Byrd said that she wants all of her swimmers to develop outside the pool as well as in the water.

“I do try to help grow them in their personal lives — in academics and the social side of things, too,” she said.

She also doesn’t want the sport to define them as people, she said.

“It’s high school swimming, and it has its place,” Byrd added. “It does matter, but only to a certain extent; for a well-rounded athlete it needs to be combined with academics and service. I expect them to always strive to be their best in and out of the pool.

“I really enjoy interacting with them,” she continued. “It’s a nice feeling to see them grow athletically and personally. The girls I have are a cut above — and that’s what keeps me going.”