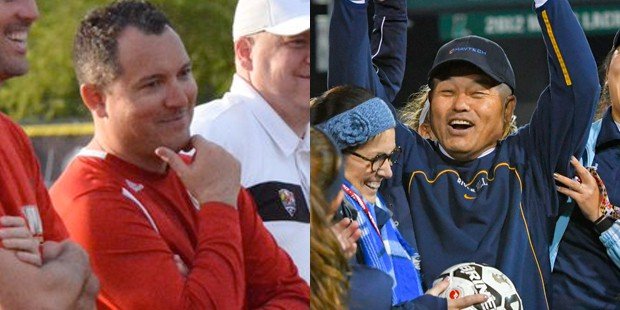 Although there are a slew of criteria one can use to judge a good coach from a mediocre one, the bottom line is always one thing.

And no girls soccer coaches in the Baltimore Metropolitan Area do it more often than McDonogh’s Harry Canellakis and Brian Song of River Hill.

Just count the titles the two dynamos have accrued in the last decade — eight Interscholastic Athletic Association of Maryland (IAAM) A Conference crowns for Canellakis and six total Maryland Public Secondary Schools Athletic Association (MPSSAA) championships for Song, equally split between Class 3A and Class 2A.

No other A Conference school comes close to McDonogh’s mark under Canellakis and only Sparrows Point’s six Class 1A banners can match Song’s tally from 2010-19, although the Pointers employed two coaches during that span.

For those reasons alone, not to mention their vast soccer acumen and uncanny ability to put the right players in the right spots, Canellakis and Song are VSN’s Girls Soccer Co-Coaches of the Decade.

To get a glimpse into how Canellakis operates, one needs to look no further than the confidence boost he gave VSN’s No. 1 Girls High School Soccer Defender of the Decade Julia Dorsey as she prepared for the daunting task of competing for a position on the University of North Carolina’s women’s soccer team.

In need of a morale boost, it arrived right in the nick of time in the form of a text message from her high school coach.

“Harry said that he had full confidence in me,” Dorsey recalled. “He told me how I was going to kill it there.”

Canellakis’ faith in Dorsey was realized, considering that the freshman defender then went on to log more than 1,900 minutes for the NCAA Division I runners-up.

She played in all 27 matches as a rookie in 2019, starting 18 of them for Carolina, which fell to Stanford University in the College Cup final.

Dorsey, who also earned a lacrosse scholarship to UNC, was on the field for the entire College Cup final, proving that she was much more than just “the lacrosse kid” bidding for a soccer roster spot.

Her praise for Canellakis’ penchant for relating to — and caring for — his players speaks volumes about how the Eagles’ team culture is carefully cultivated.

“Harry cares for every player as a person,” Dorsey said. “Not just as a soccer player.”

That sentiment was echoed by VCN’s No. 2 Striker of the Decade Kia Rankin, a 2016 McDonogh grad who also admires the cerebral side of her former coach.

“Harry would pull you aside and say, ‘You could have done X, Y or Z,’” she said. “He’s very smart when it comes to tactics, and he ingrains that in you as a player.”

Including a five-year stint with Culver Academy in Indiana, Canellakis’ overall career record is a sparkling 211-20-12.

“I hope my players would say that I’m a players’ coach who coaches the individual within a team concept,” Canellakis said. “I also hope they would say that we’ve had a special team culture at McDonogh. We have a great tradition, with great team leaders who have bought into core beliefs.”

His team’s style makes the sport fun to play.

“One of our principles is that playing defense is playing offense without the ball,” he said, alluding to the Eagles’ quest to turn a takeaway into transition.

“Harry has a very clean way he likes his teams to play,” Song said. “He’s coached some great players and I have great respect for him. He’s very mild (on the sideline) but very intense. I’m the same way. And Harry usually has at least one stud player in each position group, so that makes him tough to beat.”

Song, who has brought home nine state titles to the Clarksville school, said that his teams have not had a lot of star players.

That said, he’s had a slew of very good players that he fit into positions of need as the season goes along.

“A lot of my players sacrifice their own talents for the good of the team,” said Song, the United Soccer Coaches’ Region (small school South fall) Coach of the Year for 2018. “And then we try to put them in different spots.”

His emphasis on playing top non-league games early in the season — the Hawks even beat McDonogh a couple of times before Canellakis took over in 2009 — helped his team prepare for later games that were more important to the ultimate goal.

“I always tell them not to be disappointed by how they do in September, but to improve each week until mid-October for the playoffs,” he said. “That’s when you really want to be playing your best.”

Such was the case in 2017 when River Hill opened the season at its own tournament with losses to Our Lady of Good Counsel and McDonogh.

Nevertheless, those setbacks didn’t stop the Hawks from claiming another title a couple of months later.

Each season Song, who has guided the Hawks to nine of their state-record 13 championships, gently orchestrated the same gradual rise that would ultimately lead to a state banner over the last decade, as he did in producing a pair of three-peats from 2012-14 and 2016-18.

They also produced three consecutive titles from 2006-08 under Song.

“It’s a learning curve,” he said. “My kids play a little bit as freshmen, a little bit more than that as sophomores and even more as juniors. We teach them skills and strategy.”

A byproduct of Song’s X’s and O’s instruction techniques is that his players also exude excellent composure and deportment on and off the pitch.

“Being a part of River Hill girls soccer was the first time I realized how a team’s culture translates to its performance,” said Victoria Tran, a junior central midfielder for Navy who was a key member of two Hawks’ state championship squads. “Coach Song and his assistant coaches were crucial in establishing the type of team culture that made people want to compete and (have a) desire to win. I think the most impressive thing coach Song has done in setting that culture is getting everyone to buy into the program.”

Song is not afraid to mix things up, employing a variety of alignments — from five midfielders and one striker to three strikers and three midfielders — to counter the strengths and skills of opponents.

He said that his most gratifying win of the decade came in a 2-1 triumph over Calvert in the 2016 Class 2A final.

“We had a field player (sophomore Juliana Grasso) playing in the goal,” Song recalled about a team paced by sophomores Brigette Wang and Ashlee Hamer and juniors Tran and Megan Chun. “We had a very young team, and we weren’t supposed to win. But somehow the ball bounced our way.”

Tran, whose game-winning goal against arch-rival Army West Point in the Patriot League championship game last November aired on ESPN SportsCenter Top10 Plays, said that Song’s ability to coax a trickle-down effect from the seniors to the freshmen makes the River Hill program so successful.

“Everyone wanted to win, even expected to win, or fought like crazy to do so,” she said. “Fostering that type of consistent environment that has led to the program’s remarkable achievements is no easy feat, and coach Song has my utmost respect for doing so.”