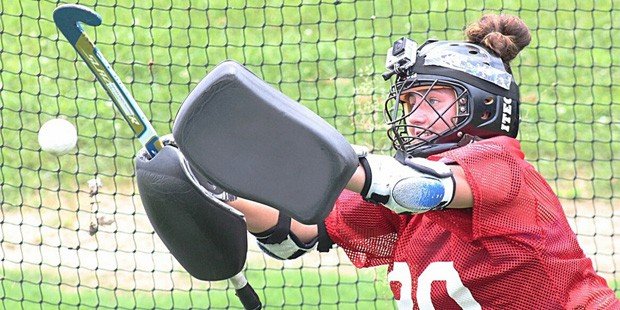 Noelle Frost walked away from her first experience as a field hockey goalie hating the position.

Currently, Noelle Frost is a fifth-year senior on the University of Maryland field hockey team, hoping her team can get on the field for a spring season.

She was 10 and the coach’s daughter, so when no one else wanted to play in the goal, she said, her father “drafted” her for the position.

“The gear was so tight on my head and I was like, ‘This is horrible,’” Frost said. “Then a family friend said, ‘We have goalie gear. Do you want to use it?’ It fit perfectly and I was like, ‘I actually like this.’ Mainly, it was the adrenaline. I just found it was more intense than playing field, because I think there’s more pressure on you and I thrive on pressure.”

At Glenelg, Frost emerged as one of the best goalies in the history of Baltimore high school field hockey and is VSN’s Field Hockey Goalie of the Decade.

She recorded an .880 save percentage and allowed just nine goals in 15 games as a senior. That improved on her .864 save percentage and 12 goals allowed as a junior, her first season as starter after playing behind a veteran keeper her sophomore year.

“She’s the best high school keeper I’ve ever seen. She just has the personality to be a great keeper,” said Ginger Kincaid, her high school coach at Glenelg and a veteran of 44 years coaching field hockey in Howard County.

“I never had a keeper who was so agile,” Kincaid said. “She would just dive for the ball and she was fearless. That’s what I think makes her excel in the indoor game. She’s got such quick reflexes, she makes such quick decisions and she’s really good at diving and getting on the ground and getting up, because she’s so agile.”

Frost, who played on the USA Field Hockey U17 team, now plays for the National Indoor Field Hockey team. Last fall, in her first season as a full-time starter at the University of Maryland, she posted an .806 save percentage, the second highest in NCAA Division I. 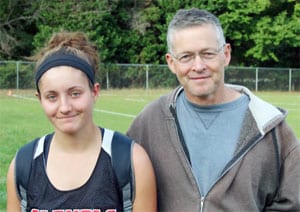 Noelle with her father Michael Frost, who “drafted” her to play goalie as a 10 year old on a club team he coached. It turned out to be a wise choice.

She started playing after two cousins who played at Frostburg State University gave her a field hockey stick. She gave up soccer and spent one year on the field before moving to the goal. As a sixth grader, in her first season in USA Field Hockey’s Olympic-development style Futures Program, she was chosen as an alternate for the Futures National Championship.

She credits her dance background for helping with her agility. Dabbling in archery and trap shooting, she said, helped with focus and hand-eye coordination.

Her entire career, she’s excelled against penalty strokes and one-on-ones. In a 3-2 Terps win over Virginia last fall, she made three saves in the shootout, including the deciding stop in sudden death.

During her senior year at Glenelg, Frost made all kinds of sprawling saves in a shootout win over Marriotts Ridge that she considers the highlight of her high school career. She made three saves in the shootout after stopping six shots in overtime to lead the Gladiators to the regular-season win that eventually helped them secure a share of the Howard County title.

“I didn’t realize goalies didn’t like strokes and shootouts until I started hanging out with other goalies,” she said with a laugh. “I was like, ‘Yay, we’re going to practice strokes,’ and they were like, “Why do you like that?’ It goes back to the pressure. I like being under pressure, because I feel like I’m very calm. I feel normal under pressure in those situations and I can just connect with my sport. I feel like it’s the rawest form of connection with field hockey.”

While Frost waits to see if the Terps will compete even if it’s in the spring, she’s finishing her dual degree in kinesiology and communications. Although this is her fifth year after redshirting her freshman season, she said there’s a possibility she could return next year if COVID-19 wipes out this season.

She ultimately would like to coach college field hockey and has coached and refereed in youth hockey. In the meantime, she’ll keep playing.

“I want to play as long as I can,” said Frost, who plans to continue with the indoor national team. “I did plan on trying out for (the USA field team) and seeing what happens, but now everything is so uncertain. It’s more or less the chips will fall where they may. I’m just going to trust myself and if I get selected to continue playing on, that’s amazing. If I don’t, I can always find somewhere to play.”