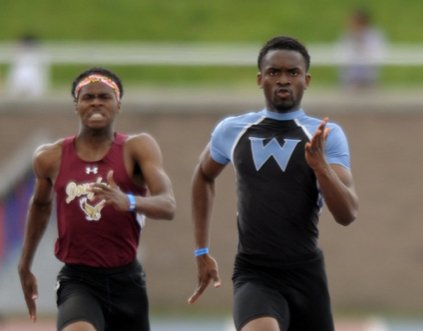 
by Derek Toney
Carrington Akosa’s introduction to track was nondescript.
“A friend of mine back in high school took me to tryouts,” he said.
Akosa immediately fell in love with the sport and became a dynamic standout. The former Western Tech star is VSN’s Boys Track and Field No. 2 Sprinter of the Decade.
The Nigerian-born Akosa capped his career in the spring of 2014, winning the 100-, 200- and 400-meter dashes at the Class 2A state outdoor championships at Morgan State University.
His 10.62-second clocking (wind-aided) in the 100-meter ranks among thea best in state meet history. Akosa also garnered the top clocking in the 200 (21.15 wind-aided) in 2A state meet history.
“He came in as a freshman with big goals — making the Nigerian Olympic team by his adult years — and over the course of his high school career, he made a believer out of me,” former Western Tech coach Shedrick Elliott said.
As a freshman, Akosa ran the third leg on the Wolverines’ state 1A title-winning indoor 1,600 relay. He captured his first individual state championship (1A indoor 300) as a sophomore in 2012.
Akosa posted “Triple Crown” runs in the outdoor 200 and 400 his junior and senior campaigns. He finished with 11 state championships (nine individual), and seven Baltimore County titles, making him the most decorated male track performer from the Catonsville school.

“When you run a personal best, you feel like you’re on top of the world and that pushes you to achieve more in track,” said Akosa.
Akosa had that same drive in the classroom, getting accepted to Princeton. He twice won Ivy League indoor titles in the 60 and 200, and won the outdoor 100 in his senior year in 2018.
Akosa holds the school indoor record in the 60 (6.72) and 200 (21.34) and ranks in the top four in four indoor and outdoor events. A major in Macroeconomic Policy, Akosa was a three-time All-Academic selection by the U.S. Track and Field and Cross Country Coaches Association (USTFCCCA).
Akosa, who hopes to be President of Nigeria, gives back to his native land as a member of the Eunice Akosa Foundation, a non-profit that provide resources to underserved countries. He works as a Country and Sovereign Risk associate for Morgan Stanley in New York.
“He 3we the most coachable athlete I’ve had in my eight years,” said Elliott, now an assistant coach at Johns Hopkins. “I’ve been privileged to work with him both on and off the track.”
Editor’s note: High school statistics and records according to Athletic.net
No. 1 Distance: Matt Jablonski, 2011, Loyola Blakefield
No. 2 Distance: Vincent Ciattei, 2013, Perry Hall
Co-No. 1 Middle Distance: Kieran McDermott, 2018, Bel Air
Co-No. 1 Middle Distance: Robbie Creese, 2011,Glenelg