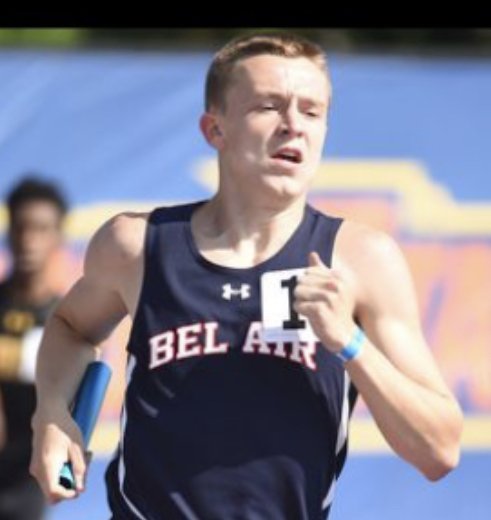 McDermott won a second straight 800 and 1,600 state championship. His 1 minute, 50.9 second-clocking in the 800 at the 3A state meet, broke the 35-year old state mark, previously held by Northern of Calvert County’s Rodney Giles in 1983.

McDermott’s 4:17.1 in the 1,600 fell shy of Centrowitz’s state mark (4:04.09). but it was enough for a second straight title. It’s something Centrowitz, arguably the area’s best high school runner the last 25 years, didn’t accomplish.

After setting the 800-meter outdoor state meet record in 2018, former Bel Air star runner Kieran McDermott is now at Princeton University. He placed fifth in the 500 at the Ivy League indoor championship meet in 2019

McDermott is one of five runners to win to back-to-back 1,600 state titles in different classifications. He won the 4A state crown in 2017.

McDermott couldn’t perform in the early portion of the 2018 spring campaign because of weather. But those early meets weren’t necessary for McDermott.

At the prestigious Penn Relays in Philadelphia, McDermott placed first in the 1,600 with a time of 4:09.63.

“After how I ran last year at New Balance Nationals, I was a little disappointed in myself,” said McDermott. “It’s really good to come back and get the title.”

“He took off so fast I was like, ‘What are you doing?,” said then-Bel Air boys coach Sharon Pickett. “You don’t need to catch up in the first 200 meters, you have 800 meters,’ but he really wanted it for his team and was probably the most selfless moment I’ve seen because he was really all about the team that day.”

McDermott capped his senior year at the New Balance Outdoor Nationals in North Carolina where he captured third (1:49.8) in the 800. It was his 11th place finish in 1,600 at the 2017 New Balance event that laid the groundwork for his huge final season.

In addition to winning the Class 3A cross country crown in the fall of 2017, McDermott placed first in the medium schools race at the Bull Run Invitational.

With six state championships to his credit, McDermott matriculated to Princeton University. He placed fifth in the 500 at the Ivy League indoor championship as a freshman in 2019.