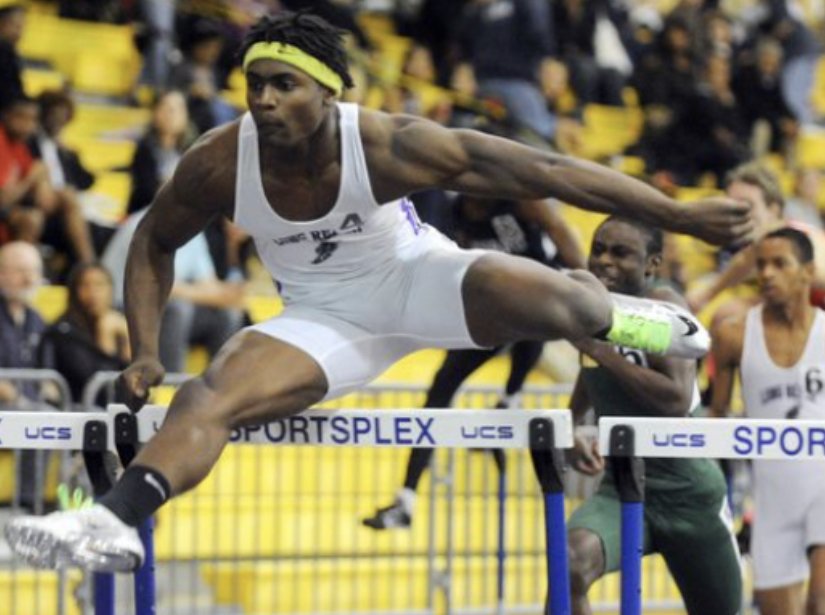 Track and football are synonymous.

Robert Carter Jr. excelled in both. Carter, VSN’s Boys Track and Field co-No. 1 Hurdler of the Decade (2010-19) was a dynamic two-sport star at Long Reach.

After missing the majority of the 2014 outdoor season due to injury, Carter put together a flawless postseason, winning the “Triple Crown” in the 110- and 300-meter hurdles. His 37.74 clocking in the 300 hurdles is ninth in state meet history.

After starring in track and football at Long Reach, Robert Carter became a football standout at James Madison University. He and brother, Ron’Dell helped the Dukes to the FCS National Championship in 2017.

Carter, who helped the Howard County school to sweeps in the 400 and 800 relays, was named Gatorade Maryland Track Athlete of the Year. He won the 60 hurdles crown at the New Balance Indoors National in New York in the winter.

Carter did track to stay in shape for football.

“Rob was just an athlete, and we were trying to find an event to put his trademark on,” said former Long Reach track and football coach Pete Hughes. “He wanted to try anything.”

Hughes said Carter, who transferred from Good Counsel to Long Reach after his freshman year, struggled at first with hurdling. He won the Howard County outdoor 300 hurdles as a sophomore in 2012 and indoor 55 crown his junior season in 2013.

Carter accepted a track scholarship to Florida A&M, but left after his freshman year because the school put sanctions on the track team.

“I had no control over it,” Carter said. “It was a calling for me to get back to the football field.”

A two-time All-Howard County defensive back, Carter transferred to FCS powerhouse James Madison where he reunited with brother Ron’Dell, who currently plays for the Dallas Cowboys.

Robert, who sat out the 2015 season, became a special teams ace and reserve linebacker for the Dukes. The brothers helped James Madison to the FBS national championship.

“It was a dream that we had when we were kids,” said Robert.

Hughes, now a football assistant at Mount St. Joseph, said Robert Carter has had a lasting impact on him.

“Rob, to me, was like a son I never had,” he said. “I just wanted everything good for him. If I had a son, these are the things I would do for him. I wanted him to be a success.”