10 Years of Excellence: VSN’s Boys Tennis Player of the Decade 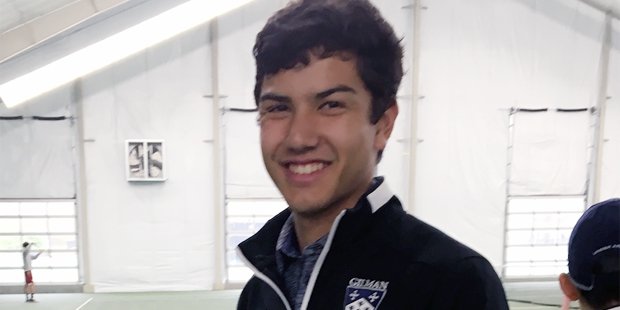 Losing a match as a No. 3 singles player as a Gilman freshman during a prestigious tournament did not deter Derrick Thompson from becoming a standout tennis player.

Instead, it turned out to be a springboard toward becoming an accomplished performer at Navy, a two-time MIAA A Conference No. 1 singles champion for the Greyhounds and VSN’s Boys Tennis Player of the Decade. 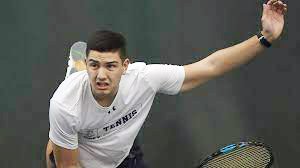 Derrick Thompson’s tennis career has sailed into another level at the Naval Academy where he was the 2019 Patriot League Rookie of the Year after tying a school record with 60 combined wins.

Turning that defeat into a positive moment underscores Thompson’s mental toughness, an attribute that has served him well on the court during a successful career that began when he was an eighth-grader in Switzerland and continued when his parents moved back to the U.S. and settled briefly in Towson.

Thompson gravitated to tennis in the French-speaking region of the European nation because he didn’t speak the language well enough to communicate with would-be teammates in a team sport.

“I couldn’t play team sports, so I had to choose an individual sport,” Thompson said on a Naval Academy Student-Athlete Spotlight video. “And the only individual team sport I played competitively was tennis.”

At Gilman, as a 5-foot-4, 120-pound rookie, he continued his pursuit of tennis, and didn’t allow that early setback to a Haverford School opponent in the NEMA (New England/Mid-Atlantic) Invitational finals to throw him off course.

“I lost the match,” Thompson said, noting that his fellow Greyhounds were impressed with his ability. “But my teammates told me that I was going to get better.”

Thompson went on to win the No. 3 singles title in the MIAA tournament for team champion Greyhounds and then his family moved to Belgium for his sophomore year before moving back to Towson for his junior and senior years at Gilman, winning team crowns both seasons.

He was undefeated (36-0) in league play at Gilman, claiming No. 1 singles titles both years as he gradually grew into a 6-foot, 180-pound, self-described “grinder.”

That ability to wear out his opponents at Navy helped him to be selected as the 2019 Patriot League Rookie of the Year after a 60-win season that tied him for the all-time program record for most combined wins in a season.

Thompson also had a 10-match winning streak, topping opponents from East Carolina, Richmond, Georgetown and Yale in 2020 and topping Army’s Diego Huttepain in two sets in the Mid’ 4-1 triumph over the Black Knights in the annual Star Series match in mid-April of this year.

“I just try to grind down my opponents,” said Thompson, who will receive his commission as a submarine officer after graduating next spring with a mechanical engineering degree. “I grew up playing on clay in Europe and didn’t develop a big forehand as a weapon that you could hit through your opponent. I like to stay in back of the baseline and use a lot of topspin. I love my backhand. It’s just a different mentality to have in a very mental sport.”

Although he said that he likes to stay back and not rush the net often, “I like to think that I’m pretty quick on the court, so I can get to most drop shots.”

An accurate service game has also benefited Thompson, who said he attempts to have “a higher-percentage of first serves in order to reduce the chances of double faults.”

Gilman’s Steve Krulevitz, VSN’s Boys Tennis Coach of the Decade, said that Thompson was a great leader at Gilman.

“He was definitely the best player in the league,” Krulevitz said. “And he was really a team guy who would take the freshmen and show them how it’s done. He was an all-court player with a big serve who could move and volley. I wouldn’t have blamed him if he just wanted to play in tournaments. But we made a great schedule for him and he just loved being part of the team.”