10 YEARS OF EXCELLENCE: VSN’S BOYS LACROSSE NO. 2 GOALIE OF THE DECADE 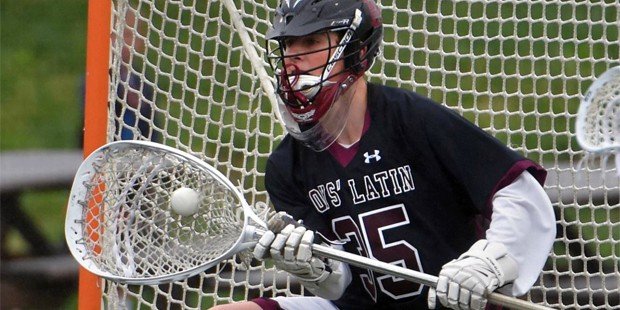 It’s one thing to play on the same team in high school — albeit at polar opposite positions — as twins Chris and Matt Brandau did at Boys’ Latin School.

Chris Brandau had a memorable encounter with his brother Matt, who played for Yale University, and won a Big East Championship during his freshman year at Georgetown University. He later transferred to the University of Maryland, but has now found a new home at Division III Dickinson College.

It’s quite another to play against each other in college, which ended up being exactly what happened when the brothers met as opponents in the first round of the 2019 NCAA Division I tournament.

And while Chris’ Georgetown University team fell to Matt’s Yale University squad, 19-16, the experience was something special the brothers will savor forever.

Although Matt, an attackman for the Bulldogs, scored four goals that day against his sibling in the Hoyas’ goal, Chris came up with the best quip about the encounter.

“He had four goals, but I had four saves (against his brother out of 14 total in the game),” Chris said with a laugh. “That makes us even.”

At BL, the Brandaus were on the same page, never quite reaching the MIAA mountaintop — but coming close after earning a berth in the 2018 A Conference final against Calvert Hall.

In that 8-6 loss, Chris’ stellar play between the pipes, which had become a bedrock of the Lakers’ success during his two-year stint as the starting goalie, was on full display.

He had already had a pair of 13-save rock-star outings in an 11-5 quarterfinal win over St. Mary’s High School and an 8-5 verdict over top-seeded McDonogh School in the semifinal round at Johnny Unitas Stadium.

The McDonogh game, Brandau said, stands out for him.

“They had our number and to come out and play as well as I did meant a lot,” he said. “That’s one of the best games I ever had. We never wavered. It was great to get some payback against them. It was an electric atmosphere. It was heaven on earth for a goalie.”

Brandau, VSN’s No. 2 Boys Lacrosse Goalie of the Decade, also recorded double-digit saves (10) in the championship against the powerful Cardinals, who had averaged over 12 goals per game against league opponents that season and yet could only muster a combined 13 in two games against the Lakers with Brandau in the crease.

That’s because he had 13 stops in an 8-5 “gut-check” win over Calvert Hall during the regular season that snapped a rare two-game Laker losing streak.

Calvert Hall converted three extra-man opportunities to jump ahead, 3-2, in that encounter before BL’s defense stiffened.

“That was one of my better games,” he said. “We zoned them up, and our defense did a great job of making them take savable shots. That was a fun one.”

Even though he and Laker ‘D’ stood tall, the Cardinals were still able to prevail in the final.

“It was a heck of a defensive battle,” Brandau said. “We played a lot of zone again and they had a lot of long possessions. I remember making some big saves, but my defense — Blake Gable, Reagan McNemar, Mike Ubriaco and Kevin Davis — did a great job against a really talented team. We played in the pouring rain, but it was a great crowd and a great atmosphere. It was everything you could ask for in a championship game.”

Like many of his fellow netminders, he more or less volunteered to play in the goal when he was in middle school.

“I jumped in when no one else would,” Brandau said, noting that having two brothers who both played attack, the aforementioned Chris and Tim, who played the position at McDonogh and Bucknell University.

“When you have two brothers who play attack, they need somebody to shoot on,” he said.

Besides, the thrill-seeker in him loved the adrenaline rush that comes with being the last line of defense.

“I love how in command you are out there,” Brandau said. “It’s high-pressure, but I’m drawn to that. Every shot can be the difference in a game, every split-second play vital. I call it turning your brain off. You can’t let one play, good or bad, affect how you play the rest of the game. You have to stay cool, calm and collected, because when everything hits the fan, people are relying on you. You’re the lifeline. It’s addicting.”

After averaging more than 10 saves a game as a senior at BL, his only season at Georgetown started slowly and built momentum after he yielded three goals against six saves after coming off the bench in a 13-12 win over Providence College in the last game of the regular season.

His real baptism of fire came in the Big East tournament final when Brandau had 15 saves in a 12-9 road triumph over the University of Denver.

It was his first start for Georgetown.

The following week his confrontation with the reigning national champion Bulldogs — and his brother — did not go the Hoyas’ way, yet he acquitted himself well.

Last spring, following a transfer to the University of Maryland, Brandau had a close-up view of a shining moment for VSN’s No. 1 Boys Lacrosse Goalie of the Decade Alex Rode in the final seconds of the Division I final against the University of Virginia.

From the Terps’ sideline, Brandau watched as Maryland sophomore Luke Wierman scooped up the face-off in the waning seconds of regulation and raced toward the goal with the Cavaliers ahead, 17-16.

Rode made the save to prevent the game from going into overtime.

“You can nitpick a goalie for how he played, but that was an example of a helluva goalie making a championship play,” Brandau said.

Brandau has since transferred to Dickinson College to play at the Division III level, first learning about the program from fellow BL alum Tucker Booth.

“I didn’t know what to expect,” Brandau said. “But it’s a beautiful school and the team has a unique culture. You can really feel how passionate the coaches are. D III is not as much different from D I as you might expect. Fall ball is shorter, so you have to do a lot of work on your own. But I’m really happy here.”