10 YEARS OF EXCELLENCE: VSN’S BOYS LACROSSE COACH OF THE DECADE 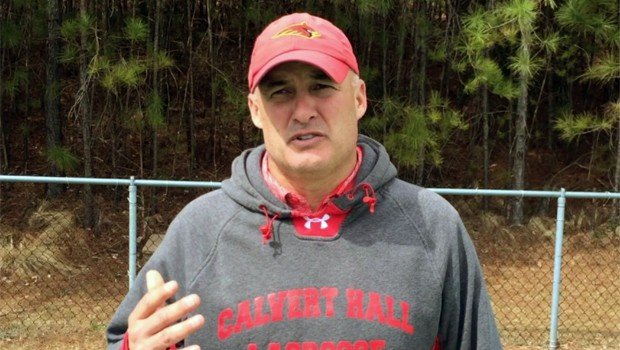 Of the five MIAA A Conference championship games in which Calvert Hall College High School’s Bryan Kelly coached from 2011 to 2019, the 2011 contest is the only one that the Cardinals lost during that span.

Yet it’s the one that might have had the most profound impact on his career.

A big part of Bryan Kelly’s success at Calvert Hall is that he runs the program as a family, not only for his sons and nephews who have starred for the Cardinals, but every player he has coached over the last quarter century.

VSN’s Boys Lacrosse Coach of the Decade said that the 13-8 setback in that title to Gilman was a pivotal moment in his career at his alma mater.

“The loss to Gilman was one of the five turning points in our program,” Kelly said. “I can look back on my career and point to five key failures and self-reflecting situations that have helped build our program and culture.

“I don’t think I coached a very good game that night,” Kelly continued. “I allowed my emotions to get the best of me, and I lost my composure and we lost our composure as a team. That was the most difficult loss I’ve ever had — it really stung.”

When Calvert Hall was ranked No. 1 nationally by some media outlets to begin the 2012 campaign and then lost a big fourth-quarter lead to Conestoga (Pa.), Kelly sprang into action.

With the help of a sports psychologist, a philosophical change soon followed.

Shortly after that frustrating defeat, Kelly asked his players to write down three things they were thinking about as the lead slipped away.

“They were worried about what people were going to say on (internet) forums and how they would fall in the national rankings,” he said. “But the No. 1 thing that they were worried about was how their parents and friends would feel (about losing). And that allowed me to understand that they were focused on outcomes rather than the process. After that, we told the kids to play with joy and to focus on the process. When you do that, the outcome will take care of itself.”

That 2012 team subsequently found its footing, losing only one more game the rest of the season and routing archival Loyola Blakefield, 17-3, to secure the Cardinals’ first title since 2003 — still the largest margin of victory ever in an MIAA A Conference lacrosse final — with a prolific attack unit that featured future college stars Ryan Brown (Johns Hopkins), Carter Brown (Ohio State) and Patrick Kelly (North Carolina).

While falling short of the final round the next three years, it was during that time that the foundation for a juggernaut that would reign supreme over the conference by claiming crowns in 2017, 2018 and 2019 was being built, producing an unprecedented three-peat during which Calvert Hall posted a sparkling 50-6 overall record and a 34-2 mark against league foes.

Now in his 26th year at his alma mater, Kelly has helped to hoist a record five A Conference banners since the league’s 1996 inception while being the only program among previous champs Loyola Blakefield, Boys’ Latin School of Maryland, McDonogh School, St. Mary’s High School and Gilman School without a middle school from which to draw promising players and bolster continuity.

During the three years between titles, Kelly said that the Cardinals played a slew of young players who would mature into champions.

He added that in 2017, midfielder Brendan Curry (who would go on to star at Syracuse) came into his own and was particularly effective in the postseason.

“Brendan had a great senior year and had a memorable championship game against McDonogh,” Kelly said.

Tragedy struck in December of that year when Kelly’s close friend and longtime assistant Dave Huntley — a former Hopkins All-American and one of the main proponents of the “read-and-react” offense — died suddenly.

Kelly said that he first installed the read-and-react on one of his sons’ travel teams before Huntley “ran with it and kept building on it. He tied a lot of his Canadian background to it. Dave had a brilliant mind.”

The Cardinals then went on a mission in 2018 to honor Huntley’s memory by earning the conference’s first back-to-back titles since Loyola Blakefield won in 2007 and 2008.

When senior attackman Peter Ilardo’s father, Harry Ilardo, died on the same afternoon of a semifinal against Loyola Blakefield, Kelly made sure that the Cardinals rallied around their teammate and his family.

Calvert Hall rolled to an emotional 15-9 win over the Dons while scoring 13 unanswered goals and subsequently topped Boys’ Latin, 8-6, two days later in the finale — with Ilardo netting the extra-man goal that put his team ahead for good.

The 2019 season was one of utter dominance for the champs after they dropped an overtime decision to Culver Academy and then won 17 straight games by an average of nearly 10 goals per contest, culminating in a 15-7 triumph over St. Mary’s to complete the impressive three-peat feat.

Kelly feels strongly that the Cardinals may have fielded their strongest squad in the 2020 season, which was wiped out by the pandemic.

“I have been blessed with great (assistant) coaches,” Kelly said, ticking off the names of Torre Kasemeyer, Dan Mulford, Dave Creighton, Joel Tinney, Scotty Rogers, Jeremy Raulo and Pat Smith. “I’ve also been blessed with great players. We try to emphasize to them that we want them to play — it’s not work, it’s play. It’s a game, so have fun and the results will take care of themselves.”

In addition to having three sons, two-time VSN Player of the Year Jacob (North Carolina), Daniel (Maryland) and rising junior Shuey, on his teams, Kelly and his staff have also developed many other standouts.

Included in that group are VSN 2019 Player of the Year Grant Mitchell (Ohio State) and 2019 C. Markland Kelly Award winner Cole Herbert (North Carolina), who was selected for the honor by the Maryland State Lacrosse Coaches Association as the best player in the state.