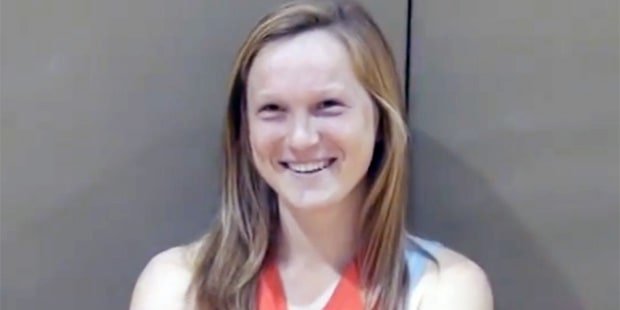 Alyssa Parker didn’t care much for field hockey when she first picked up a stick, but her sister Lauriann persuaded her to give it a few more tries.

Listening to her big sister led Parker to Glenelg’s field hockey team and one of the finest high school careers in local history. She led the Gladiators to two state championships — the first in program history as a junior — and earned All-America honors before going on to play at the University of Maryland and for the USA Field Hockey National Team.

Glenelg graduate Alyssa Parker, VSN’s No. 1 Field Hockey Player of the Decade, recently committed to four more years with the US National Team in hopes of helping the squad qualify for the 2024 Olympic Games in Paris.

Parker, Varsity Sports Network’s No. 1 Field Hockey Player of the Decade, is believed to be only the second high school player in the nation to finish her career with more than 100 goals and 100 assists.

“She is without a doubt the best field hockey player I’ve ever seen,” said former Glenelg coach Ginger Kincaid, who has coached hockey in Howard County for 44 years.

And it never would have happened without her family.

Her mother, Jean (Soscia) Parker, had played field hockey at Mount Hebron and wanted Lauirann and Alyssa to try it. There was no club in Howard County, so the parents started one, the Howard Stampede.

At the time, Alyssa was more impressed with soccer.

“I started (field hockey) in fifth grade but I hated it, so I went back to soccer,” she said. “I just thought it was too slow and too many whistles … but my older sister played, so I picked it back up again in middle school. Going into freshman year, my sister was going to be a senior and she convinced me to try out so we could hopefully be on the same team together. Luckily, Ms. Kincaid chose me for varsity, so my sister Lauriann and I got to play together for a season and that was pretty special.”

Even then, Alyssa thought she might want to play basketball in college, but that slowly changed.

“I liked the challenge of field hockey, the balance between finesse and power and that you have to involve everybody on the field if you want to score and be successful. I liked that it was a full team sport. I really liked that for one goal, you could truly involve six different players.”

Alyssa, a four-year starter in the midfield, said she was prouder of her 108 career assists than her 114 goals and Kincaid said she excelled at setting up her teammates.

“She was a playmaker and a very unselfish player,” said Kincaid, who built her midfield around Alyssa. “She wanted to bring everybody into the play. She’d be in the circle and she’d be dishing the ball to all kinds of people and they’d be dishing back to her because they wanted her to score… She just made things happen. She brought the level of play up of everybody. When she entered our program the level just took a jump.”

As a junior, Alyssa finished with 38 goals and 38 assists. The Gladiators had been to the state final four 12 times before they finally won with Alyssa assisting on both goals in the 2-1 win over Century in the final. In the District V championship, she scored both goals in a 2-1 statement win over then-No. 1 Severna Park.

Her senior year, she scored 37 goals and had 36 assists including one of each in the 3-0 Class 2A state title victory over Poolesville.

The Gladiators finished No. 1 both years with a combined record of 37-2. With Alyssa in the lineup, Glenelg went 67-8-1, beat every Howard County opponent and reached at least the state semifinals each year.

Alyssa twice earned Player of the Year honors from Varsity Sports Network, The Baltimore Sun and The Washington Post. The Field Hockey Coaches Association of Maryland named her first-team All State both years and she was a National Field Hockey Coaches Association first-team All American as a senior. Three times, the Howard County Times named her Howard County Player of the Year.

Kincaid said that while Alyssa had the speed, athleticism and skill to stand out and was driven to always play hard, she also never stopped having fun. That’s still true today, according to her USA teammate Linnea Gonzales, VSN’s No. 2 Field Hockey Player of the Decade.

“When I think of Parker, I always think of her 3D skills. She loves to lift the ball, but just as a person, she’s such a radiant soul and so energetic and she has so much fun. I love being around her,” said Gonzales.

While at Glenelg, Alyssa also played for the Washington Wolves club team and coaches Amy Wood and Joann Engestrom. She made the USA Field Hockey U19 team in 2011.

At Maryland, she helped the Terps reach the NCAA semifinals twice as a midfielder or forward while moving up in the USA Field Hockey ranks. In 2016, she made the senior national team and now has 46 international caps.

As a professional athlete, sponsored by STX, she is currently training at home.

At 26, Alyssa is eager to move on, have a big family and coach field hockey, but she also wants to play in the Olympics which the U.S. narrowly missed qualifying for this year.

“I’m totally down to stay another four-year cycle and try for Paris 2024. It’s cool because the World Cup qualifying begins next year, so we have that to focus on… It sounds like it’s a long time — ‘Oh, another four years’ — but in the big picture, it goes by fast. I think I would regret walking away without trying again.”